Open the Networks for Direct Competition: The AOL-Time Warner Merger was Never Enforced.

UPDATE to Part IV in the series based on the new report "It's All Interconnected."

There are relationships and financial ties between Verizon's wired-business and Verizon Wireless, as well as Verizon's deal with Time Warner and Comcast that are complicated, twisty, multi-layered and reveal a nasty underbelly -- and it is just another reason why the Comcast-Time Warner merger will harm all of the states where Verizon is the incumbent phone company that controls the wires. 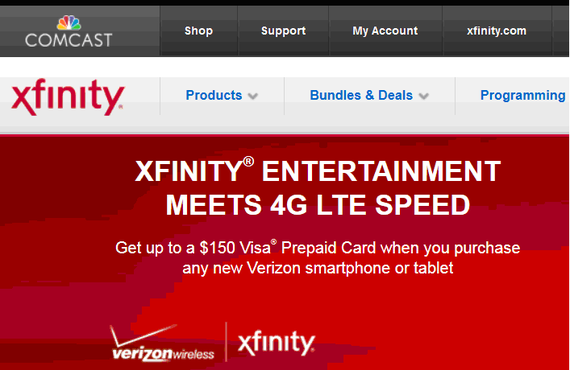 If we overlay Verizon's FiOS deployments, Verizon's plan to shut off the copper and replace it with Verizon Wireless, and the deal Verizon has with Comcast and Time Warner today--for one state, New York, we find that:

We've written a separate article about special access using the new report, but essentially, there is a hidden network of wires and services, known as special access, that are mostly broadband and data lines to businesses that have a speed of 1.5 mbps or more in both directions. There are much larger configurations where the wires that go to the wireless cell towers, hot spots and broadband networks and are used by large competitors, such as Sprint, (and these are sometimes called "back haul").

Verizon and AT&T have a monopoly on these hidden networks in the states where they are the incumbent utility, and special access has obscene profit margins, and it is one of the reasons America's broadband is slow and expensive, as the companies have been able to keep control of these networks, to the detriment of all users and competitors.

But here's the secret -- in areas where Verizon is 'shutting off the copper', it isn't shutting off the 'special access wires' that were laid as part of the wireline networks and used by the wireless company -- and Verizon Wireless is getting special advantages over all other competitors who will be using these networks as well.

The Ties and Advantages of Verizon Wireless -- In tracking Verizon New York's fiber optic deployment it is clear that:

Verizon Wireless/wireline make money on every wireless call -- Because Verizon controls the special access wires and has inflated rates for competitors, then it knows that it will get revenue from everyone who goes to wireless, regardless of the company.

Verizon hedged its bets with cable -- Even though Verizon has not upgraded 80% of the municipalities, it has been continuously putting in 'special access wires' especially used by Verizon Wireless. So, if Verizon 'shuts off the copper', it still keeps the special access services online.

"Verizon New York-wired and Verizon Wireless and Comcast and Time Warner all working together already."

Making Time Warner and Comcast larger doesn't bring more competition and reinforces the 'DO NOT COMPETE" status today with Verizon Wireline and Verizon Wireless. There can't be lower prices when the wireless company is colluding with the wired company who has a deal with the cable company. And this is not competition. Last time I looked you need more than two companies to be called 'competition'. In New York, 80% of the municipalities will be a cable monopoly product -- and if the merger goes through, by only 1 company.

This is an anti-trust case waiting to happen.

Few know that the original AOL-Time Warner merger , circa 2001, required Time Warner to open its networks so that there would be high-speed Internet competition from other ISPs using the Time Warner networks.

During the merger, the FCC specifically stated that not opening the networks to competition would essentially cause what we call today, Net Neutrality.

Conditions were imposed to open the cable networks to direct competition as part of the merger conditions. 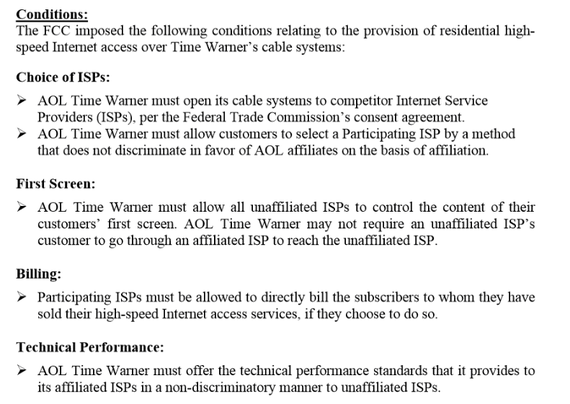 This failure to have the cable networks opened to competition as a condition of the merger is proof that whatever merger requirements are put into the Time Warner-Comcast merger, they are a waste of time, will not be enforced, and whatever was promised is simply a broadband-carrot to close the deal.

Instead of allowing the merger, we should be asking about the collusion of the wireline-wireless-cable companies and whether it is time to start to reopen the networks to direct competition -- and solve Net Neutrality.

Coda: In our previous article we addressed the "Social Contract". In 1995, the FCC created the "Social Contract", which was an actual agreement with Comcast and Time Warner that allowed them to raise rates up to $5.00 a month, and in exchange they would upgrade their networks for broadband and Internet and supply high speed Internet service to all schools in their area.

Update: In recent testimony by Comcast and Time Warner in New York State pertaining to the merger, neither company mentioned that they had been wiring schools, something that they would have used as selling point for the merger.

To read our testimony, see: