This past month, I left my job in Congress to return to community organizing. It was a hard decision, but I could no longer just sit there in a place full of political games -- games that are causing too much pain in our community. After the country helped stop my mother's deportation, I came to realize that our community and the American people have the power, not politicians inside the beltway.

In the beginning of the year, I was hit with the most unexpected and painful experience of my life: Immigration and Customs Enforcement (ICE) tried to rip apart my family by detaining my 55-year-old mother and older brother from my home -- a haven I thought would be the safest place for any family.

After seeing my mother in handcuffs, I realized that I was perhaps wrong about the President I encouraged my community to support. I realized that the words President Obama said as a keynote speaker at my Arizona State University graduation in 2009 were empty words.

Fortunately, with the help of the country, my family has been reunited. My community organizing background and public story was the key for the success of keeping my mother home. 'Til this day, I don't know who, but a higher up in Washington D.C. made the call to release my mother and my brother after witnessing the national outcry. Her return was one of the most amazing moments in our memories.

It was also the beginning of a new stage in my life. I call it the "Clean Obama's Mess" stage.

I have since then received dozens of messages from families, who like me, have been terrorized by the inaction of congress and deportation quotas from the White House. They don't just reach out to tell me their stories, but to desperately plea for my help.

My heart was filled with joy to know that my family was going to remain together for another year. The joy, however, was short-lived. I received a call from Naira, a young mother with two citizen children, asking me to help her husband. Immigration informed Naira that Ardany Rosales, her husband, was going to be deported in two days. My joy quickly turned into anger, anger of knowing that immigration authorities had arbitrary standards when it came to deciding who got to stay and who got deported.

My mother's case was all over the news, but no one was looking at Ardany. No one knew that another parent was about to be deported. My mother was allowed to stay. Ardany was not.

We decided to fight again. Along with the family, 20 people decided to go with the family to pray outside the detention center so Ardany would not deported. We peacefully and quietly prayed outside while people made calls from their homes to ICE. We were unsuccessful. Indeed, ICE employed deceptive tactics to avoid confronting the community. They used an empty bus as a decoy to distract Naira and her children in thinking their father was in that bus only to find out that he was taken out from a secret exit and already at the airport about to be deported. Indeed, immigration authorities went as far as giving Ardany a sedative to make him sleepy and not resist his deportation. 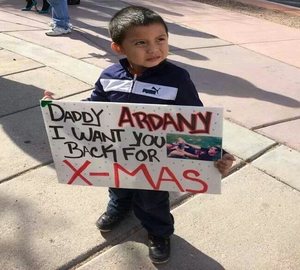 Ardany, a father of two citizen children who came to the U.S. to escape gang violence and death threats for helping youth get out of gangs, a husband who had not met his new born baby, and a good man who had never committed any crimes. His family had a very different outcome than mine. That is not fair.

In 2008 I was excited to see Barack Obama as the new president -- a president that carried a "Change" banner all over the place and promised to pass immigration reform as soon as he took office. I was tired of fighting extreme Republicans from my home state of Arizona. I encouraged my citizen friends to vote for him thinking he would save us from the anti-immigrant wave that was infecting other parts of the country.

Mr. President, you still have time to bring real "Change." Please be the President I believed in 2008 would be our champion for humane immigration policies, not just legislation. A president that would stand up to the Tea Party and not a president that would rack up more than 2 million deportations. A record number of deportations should not be part of your legacy, nor should a generation of young people disillusioned by your presidency.