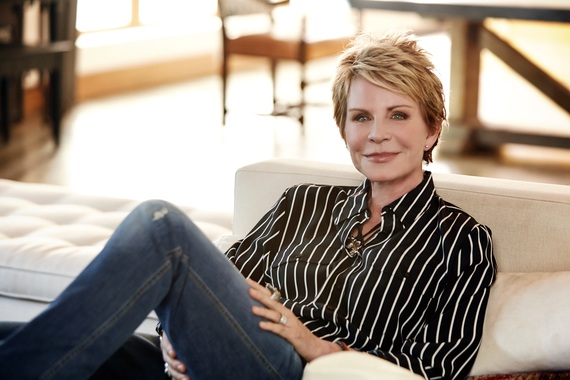 Patricia Cornwell is known to millions of readers worldwide. She has won nearly every literary award for popular fiction and has authored 29 New York Times bestsellers. Her novels center primarily on medical examiner Kay Scarpetta, along with her tech-savvy niece Lucy and investigator Pete Marino.

In her newest novel, Depraved Heart, we find Kay Scarpetta working on a highly suspicious death, when an emergency alert sounds on her cell phone. It seems to be coming in on a secure line from her niece, Lucy; and a video link plays a surveillance tape of Lucy taken almost 20 years earlier. Additional video clips follow, along with a strange series of incidents involving Lucy, the suspicious death of a Hollywood mogul's daughter, the FBI, and the unseen presence of a "depraved heart" behind these mysterious events.

Depraved Heart expands beyond forensic science to technology. In the novel, you bring up the concept of data fiction. What is this?
When you think of things we're afraid of in today's world, they're quite different from what they were twenty years ago. Much of it has to do with technology and terrorism. Years ago, it was more the fear the Ted Bundys of the world might crawl through your window.

The things we fear today have changed. With technology, the Internet and social media--with identity theft wiping out people's bank accounts and events like that--we don't necessarily know what's real or true anymore. Everything's electronic: these aren't things you can hold in your hand. We're not dealing with tangible items. How do we know what's true? If someone wants to manipulate us, how preventable is it? I coined the term data fiction to describe this phenomenon.

Later in the book, the reader will learn there's also a type of malware that can produce data fiction. Imagine a virus that can go into computer systems and alter data. Imagine if the DNA data base was corrupted.

Or perhaps one's bank or brokerage account.
Absolutely. The changes in technology in our world have caused me to dramatically alter what I do in my books. Kay Scarpetta is our contemporary, so she has to worry about cybercrime--not only personally, but its impact on her cases.

Depraved Heart depicts, among other things, an adversarial relationship between the FBI and local law enforcement. Will you talk about that?
It's been known for a long time--almost to the point of being a cliché--that local police and the feds are like oil and water. Typically, with a big case, the first responders are local police, then the folks from the regional FBI field office show up. They often take over the investigation and the local police don't much like that. These outsiders don't walk the streets and don't know the people in the community.

Local police often complain the FBI is quick to take credit because they're very PR oriented. They need to be visible and sort of Hollywood to increase their funding in Washington.

In Depraved Heart, it's more than adversarial. It's hostile.
Yes. There's bad blood between Lucy and one FBI agent. While it's fiction and may be somewhat exaggerated, there are times I portray law enforcement people as the bad guys, which can happen in life, too.

You're very prolific. Only a short time ago, we talked about your last novel, Flesh and Blood. Do you ever deal with procrastination or writer's block?
I most certainly do. I like to remind people not to judge me based on what they see on the outside. Prolific and successful people have the same problems others do. I absolutely have days where I'll find every excuse under the sun not to sit at that desk and write.

Why is that?
Because it scares me. It's hard. And if the characters are being uncooperative, I just move words around uselessly. At times like that, I wonder who stole my characters? Or, think they've gone on vacation.

I don't feel I control that world. I don't think you can be creative if you try to control what you're doing. You have to allow psychological spaces in your mind--ones you don't even know exist--to let things surface on their own. It's far easier to do almost anything else than to write.

Sometimes, I have writer's block where I'm stuck in a scene. When that happens, I need to go back to where the script was working. I've probably taken a wrong turn, and some part of my brain is saying 'You don't want to go any farther. You're on the wrong track.' When I'm at that kind of dead end, I go back, and fix it.

But, writer's block is a terrible thing--whether you're a journalist or writing fiction--it's debilitating and depressing. I always say the genius within us all is the child. That's where all the good stuff comes from. So, writer's block may very well be a matter of your little child not being happy. And if the child isn't happy, he's not pulling out his crayons. (Laughter).

What's the most important lesson you feel you've learned about writing?
I think the most important lesson I've learned is the power in letting go. You have to learn not to try to control the process of writing. You've got to freefall, and adults don't like to do that. But if you think about how you started writing as a child, you'd get a piece of paper, a pencil or crayon, and you would just start with whatever came into your head. You didn't plan an outline or do storyboards.

Then, when we become adults, we feel we must control the process. The more you try controlling creativity, the less successful you're going to be. It doesn't mean you can't have structure or logic, but if you overthink, you won't be creative. Thinking can be dangerous. The worst stuff I write is something I thought out instead of writing what just comes out of me. It's really more intuitive than anything else.

You have so many interests. What's a typical day like for you?

I love scuba diving and flying helicopters, but if I did so every day, I wouldn't be able to write books. I've been dabbling with television and Hollywood, which is fun and takes up some time; and I make sure I exercise every day.

If we're in the same place, my partner Staci and I almost always have dinner together; and we enjoy watching television.

My favorite kind of day is a quiet one. I get up, go to my desk and write. If it's a lovely day, I'll take a break and go for a walk. I don't listen to anything while walking--I don't want to get hit by a car--and, I use the silence of the walk to let my mind roam free. In our busy, need-to-be-connected world, you miss out on the pleasure of solitude if you're constantly looking at your cell phone while walking.

I give myself an hour to think and just be still. Then, I'll go back and write some more. That's the essence of a good day for me.

What, if anything, keeps you awake at night?
What keeps me awake or restless while I'm working on a book is, I can never get away from it. I'm lying there and have this anxiety: 'Oh, I've got so much left to do,' or 'I'm only on page ten,' or, 'Will I ever finish this thing?' When I'm writing a book, it feels like I'm always living with it. And when I'm finally finished with a novel, I'm instantly starting another one.

Your first book, Postmortem, is considered the first forensic thriller. I understand you had an interesting experience at your first book signing. Will you tell us about that?
It's really about not being invited to the dance.

Post Mortem was accepted very tentatively by the publisher. It had been rejected by almost every other major house. When it was published, there was no marketing budget or publicity plan. I went to a local bookstore and got to know the owner. He agreed to do a book signing. By, the way, it was a religious bookstore, so it was the completely wrong venue for a forensic thriller. (Laughter).

Well, on the day of the signing, I got there on my lunch hour at the appointed time, and not a single person showed up. One lady came by and held out a tissue. I asked if I could help her and she said, 'Yes, please put this in the trash for me.'

I said to myself, 'My future is not looking very bright.'

What advice would you give to writers starting out?
My advice would be this: You'll never be good at anything if at first you're not bad. That pertains to writing or anything else. You must have the courage to fail. Be willing to be really bad (Laughter).

I would also say, 'Rejection is not a measure of your worth.' If it were, I'd be worth nothing because I've been rejected so many times. I wrote four novels before one was finally published.

Congratulations on writing Depraved Heart, a gripping novel of forensic science, explosives, pathology, crime, scuba diving, and above all, unrelenting tension and suspense.