Relapse is a common but troubling symptom of depression, with anywhere from 50 to 80 percent of people who experience one or more depressive episodes going on to experience another episode.

While the causes of relapse are often unclear, new research from Binghamton University, published last week in the journal Clinical Psychological Science, suggests that an attentional bias towards negative facial expressions may be one risk factor.

This suggests that attentional biases might be able to predict a person's risk for depression relapse, according to researchers. The findings may also open up the possibility of new preventative treatments to help individuals with a history of depression reduce their tendency to focus on negative facial expressions.

"This is exciting because, although we know that depression is a debilitating and highly recurrent disorder, we do not have good tests to identify which people are at greatest risk for relapse," Dr. Brandon Gibb, director of the Mood Disorders Center at the university, who led the study with graduate student Mary Woody, told The Huffington Post in an email. "We believe that this research is an important first step in identifying markers of future depression risk in people who are currently feeling fine." 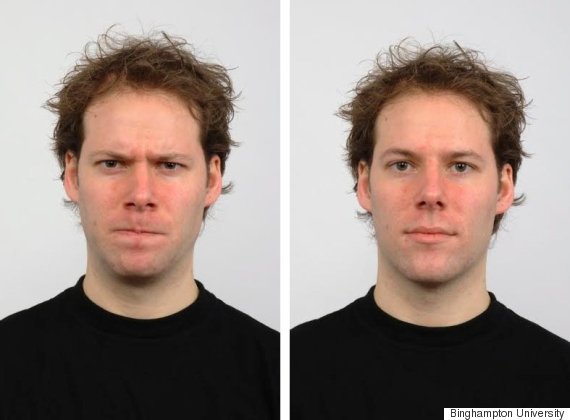 "What we showed is if your attention is drawn to people who appear to be angry with you or critical of you, then you're at risk for depression," Gibb said in a statement.

It's easy to see how this test might be used to measure or predict anxiety, which involves an overactive brain response to negative or threatening stimuli. But why would it predict depression?

Well, it's likely that this attention bias indicates a heightened sensitivity to criticism and conflict, which is often a component of depression, especially in women, Gibb said.

"Responses to threatening stimuli are most commonly thought of in response to anxiety, not depression," Gibb told HuffPost. "However, interpersonal theories of depression emphasize the role of interpersonal conflict and rejection."

The study did have some limitations -- it was conducted only on women because, as the researchers explained, they tend to be more reactive to interpersonal stress. It's not yet clear whether similar results might be observed in men.

However, the researchers said their work opens up some exciting new possibilities for diagnosing depression and preventing relapse. Scientists might be able to develop, for instance, computer-based games designed to help people with a history of depression to reduce their biases towards negative facial expressions and stimuli.

"These types of interventions have already shown great promise in the treatment of anxiety, and we are hoping that they can also be used for the treatment of depression," Gibb explained. "Our results suggest that a useful target of these interventions in preventing depression relapse is reducing individuals’ tendency to have their attention get stuck on angry faces in their environment."