Growing up in Connecticut, I was a diehard follower of what I now call the American Happiness Formula: Look Good + Perform Well + Get Approval = Happiness. The formula was never spelled out for me per se, yet it was the unspoken doctrine that ruled my life and the lives of those around me. 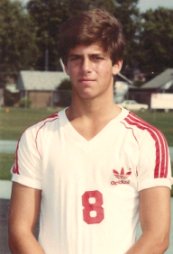 As a child, I was star of the soccer field; as a teenager, I was state wrestling champion and as a young adult, I was a commercial model and promising Wall Street intern. Boy, did I try really hard to Look Good, Perform Well and Get Approval, yet the American Happiness Formula never lived up to its promise. All it did was leave me with daily migraines, stress related stomachaches and a general feeling of emptiness. (Yes, that's me in the soccer uniform with stress written all over my face.)

Unfortunately, I was not the only one. Do you know that children are significantly more anxious and depressed today than during the Great Depression and World War II? In fact, the research of Jean Twenge, professor of Psychology at San Diego State University, shows that the time period a child is born in actually has greater impact on his level of anxiety than even his family environment. Twenge says, "Even if you come from a stable, loving family, growing up amidst the stress of recent times might be enough to make you anxious." Exactly my story.

Twenge's research not only provides the data about the downward spiral of the mental health of America's children, it also points to the reasons why. Her research showed that the average young person in 2002 was more externally motivated than a whopping 80 percent of young people in the 1960s. When comparing the data, she discovered that the rise in children having extrinsic goals matched the same rise in depression and anxiety during the same forty-two-year period. Ah ha! Therein lies the answer and it all points to the American Happiness Formula.

Over time, our children have been encouraged and led by the media to follow the American Happiness Formula. We have become approval junkies always looking for the next fix, the next hit of validation and approval. The problem is that our goals (Look Good + Perform Well + Get Approval) are all extrinsically based. They are based on what other people think of us, something we have no control over. When children believe they have little or no control over their fate, they become anxious, and when their anxiety and sense of helplessness becomes overwhelming, they become depressed.

We need to encourage our children to focus on intrinsic goals which are based on individual development. If we focus on intrinsic goals, we are looking to personal effort and progress -- things we can control. Having a sense of control of our own lives can then lead to feelings of contentment and happiness. Research has shown that those who are intrinsically motivated exhibit not only more interest, excitement and confidence in their lives, but also enhanced performance and higher levels of self-esteem and well-being.

There's strong media pressure and a societal current today that will encourage your children to look for their happiness from the outside in. You can help turn that around by showing your child how to look inward for their validation and self-worth. Guide them to care more about the type of person they are on the inside rather than how they look on the outside. Help them to focus on their effort and being their personal best rather than focusing solely on performance and achievements. And most importantly, help them to see that getting approval from others is only a temporary illusion of happiness. Save your child from getting consumed by the American Happiness Formula by giving them the skills they need to develop true and lasting happiness that can only come from the inside out.

parenting adviceraising kidshow to be happyParenting anxiety
Go To Homepage