When you get an email from Nigeria telling you that you will receive $10 million dollars if you send $1000, your Social Security Number, and your bank details, do you do it? 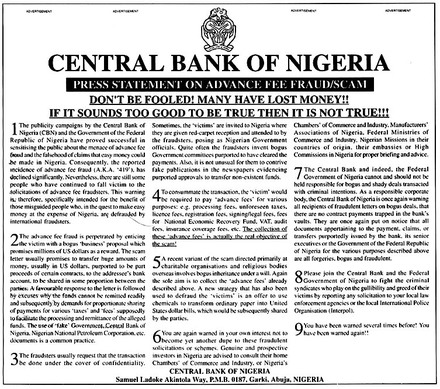 Do you believe ads that say, "Lose 50 pounds in two weeks--without diet or exercise!"?

How about if someone tells you: "We're gonna fulfill every single wish, every single promise; we'll make all your dreams come true."

Those are the words of a con man named Donald J. Trump. 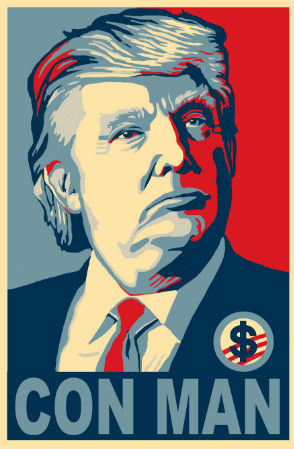 If you don't fall for other scams, why would you believe Trump when he says he is your voice, your champion, that he cares about you, that he will magically bring back jobs, make the economy boom, end crime and violence, quickly defeat ISIS and end terrorism, eliminate the federal deficit while cutting taxes, and so on and on . . . without ever giving the slightest hint of HOW he would do any of it? "Trust me!" he says. "Believe me!" "It will be incredible!" He is a classic swindler, as he has been in all of his dealings throughout his life. 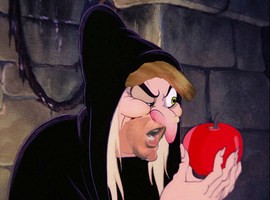 Donald Trump is the Wicked Queen in Snow White offering you "a magic wishing apple." "One bite and all your dreams will come true!" the con man tells his marks. "Now make a wish and take a bite, heh, heh."

Far from identifying with those who are facing economic difficulties, Trump disdainfully classifies them--you--as "losers" and suckers.

It is all but certain that in his private moments he is laughing at those who fall for his con. That would be you, if you are supporting him.

He poses as a prophet and a savior. Just believe in him and he will solve all your problems. "I will give you everything. . . . I'm the only one." It's so enticing. You want to believe. That is the definition of a cult.

George Will, who has been one of the leading voices of conservatism for decades, accurately labels Trump as a "venomous charlatan."

Donald Trump is a venomous snake selling snake oil. Learn from Eve and don't believe what a lying snake tells you.

Here is the plain, undeniable truth:

Those who know him best say that he is a full-blown narcissist, psychologically incapable of caring about anyone but himself. Throughout his business career he has stiffed contractors and workers and used other people's money (he brags about it, calling it OPM) to make risky investments from which he takes the profits if they are successful, but leaves the losses for others to suffer if they fail. He declares bankruptcy whenever convenient for him, leaving others holding the empty bag. He doesn't pay taxes and won't release his tax returns.

He says he will bring back jobs that have gone overseas, but he has many of the products that he sells made in Mexico and China and buys Chinese steel for his construction projects.

His economic plan is the failed trickle-down approach that has never worked in the past: slash the taxes of the super-rich, concentrate even more of the nation's wealth and income in the accounts of the top one percent, and cut regulations on financial institutions so that they can again crash the economy. Remember when he admitted to rooting for the housing market collapse so he could make money off the suffering of millions of Americans and said, "That's called 'good business'"?

Donald Trump has the self-control of a two-year-old, the name-calling practices of a six-year-old, the vocabulary of a ten-year-old, and the knowledge of a twelve-year-old. He is a crybaby, a sore loser, a schoolyard bully. He lashes out viciously at anyone who crosses him in the slightest. Can you seriously imagine him with the nuclear codes?

He is so insecure that he feels the need to brag about the size of one of his organs in front of millions of television viewers of all ages, emblazons his name on tall buildings, and insists he is the "best" and "smartest" person in the world. "I feel like a supermodel," he says, "except like times ten. I'm on the cover of the biggest magazines."

Here is a man who knows nothing, cares about no one but himself, is completely without conscience, morality and common decency, lies with impunity almost every time he opens his mouth, insults everyone, whines whenever things don't go his way--and wants to be President of the United States!

Mr. Trump keeps saying the election will be rigged and that he may not accept the outcome. People close to him have said there will be a bloodbath if he doesn't win and suggested the assassination of Hillary Clinton. Trump himself has said he will put his opponent in jail. He has indicated that he will crack down on the free press. He admires foreign dictators, particularly Russia's Vladimir Putin, to whom he appears to be beholden financially.

Donald Trump's answer to every question is the only thing that is ever in his mind: "Me!" That is not democracy.

This is the United States of America we're talking about--not some banana republic, Mussolini's Italy, Franco's Spain, Peron's Argentina, Pinochet's Chile, Castro's Cuba, or Putin's Russia. Our ancestors fought a revolution so that we would not succumb to the rule of a self-imagined "strong man." Yet today, inexplicably, millions of Americans seem ready to put our fate into the hands of a foul-mouthed, pathological liar, know-nothing demagogue who boasts, "I alone can fix it.... I am your voice." That is the definition of authoritarianism--the opposite of Americanism.

Donald J. Trump is, far and away, the most dangerous, the most unstable, the most anti-American, and the least qualified person ever to come this close to the presidency of the country we love.

The future of American democracy is at stake. You may dislike and disagree with Hillary Clinton, but she is plainly competent and the United States will certainly survive her presidency. That would be far less certain with Donald Trump as president. If you have been taken in by Trump and joined his cult, realize that he doesn't give a damn about you and is privately laughing at you as one of his suckers. Find a way to break the spell and deprogram yourself before Election Day.

{Robert S. McElvaine teaches history at Millsaps College and is the author of ten books. He has just completed a draft of his first novel, "What It Feels Like ..."}