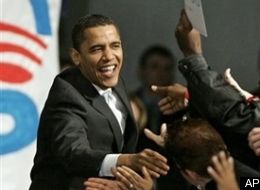 After South Carolina, it became clear that O had Mo — and now Barack Obama has a brand-new word to show for it. Just as "Huckaboom!" became a catch-phrase back in December when all of the sudden the previously ignored former governor from Arkansas began to rise in the polls, so too has the phrase "Obamomentum" reached new prominence in the political lexicon. Never mind that it's already got its own entry on UrbanDictionary (which we know confers instant legitimacy), last night it got a mention — and chyron — on CNN, courtesy of anchor John Roberts in a chat with Candy Crowley. (Roberts also did what he could for the term "Huckabounce," but it never quite made it.) It's also been used by Marc Ambinder at the Atlantic, with an odd sort of anology ("An Obama campaign without momentum is like lasagna without red sauce." True, though sort of in the way that "Who are three people who have never been in my kitchen?" was true). Actually, given the fact that the storyline about Obama right now is all about momentum — especially after Saturday's sweep, and with what looks like rosy prospects today for Chesapeake Tuesday or Potomac Primary Day or whatever the kids are calling it — it's surprising that there are only 1,490 Google hits for "Obamomentum" and 2,440 for "Obamamentum." Meanwhile, there are 3,260 for "Barack Attack," so really who knows. "Obamania" still takes the cake with 53,300; in the meantime, we're standing by "Obamomentum" — as a word, and, heading into Chesapeake Potomac Day, likely an entity. You heard it here 1,491st!