How do we save the lions?

A new film from Dereck and Beverly Joubert, National Geographic explorers-in-residence, looks to answer that question, and highlights the complex relationship between man and beast as the number of great cats across Africa dwindles. The feature documentary, called "Game Of Lions," delves into the challenges facing lions, especially males -- although cubs are born in equal male-female ratios, only one in eight male lions reaches adulthood. With poaching, hunting and encroaching humans threatening a growing number of the animals, the film hopes to shed light on the difficulties these lions face.

In addition to producing award-winning films and stunning wildlife photography, the Jouberts have been advocating for the African predators for decades, launching the Big Cats Initiative in partnership with the National Geographic Society to promote conservation efforts on the ground.

The Huffington Post spoke with the Jouberts about their new film and their ongoing fight to save the world's great cats.

What are the main threats that lions face in the wild?

Dereck Joubert: First of all, poaching has become quite a substantial threat. There’s a lot of poaching based on this new wave for lion bones, drying them for a wine. Part of it was as a replacement to tiger bone, and it's worth its weight in gold. We’re losing this battle; 1,000 lions a day are being killed.

Another major factor is lion hunting, legalized trophy-hunting, About 600 lions a year get shot for trophies, 100 [or] 50 of those coming to the U.S. While we can point fingers at China, we can also point fingers at ourselves.

The last major part of it, about 25 percent is as a result of conflict, where lions run into cattle, lions then kill the cattle, and the cattle herders kill the lions.

With "Game of Lions," in the very early screenings people have been blown away by the absolute hardship that these young males go though. It really is like a game of kings, a game of thrones, a game of lions. 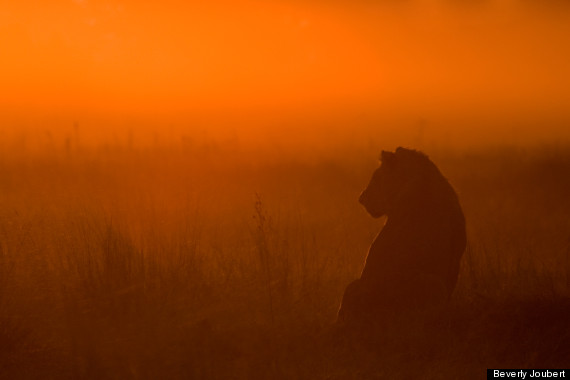 An adolescent male lion sits in the grasslands of the Okavango Delta in Botswana at sunset.

Do you think the world is doing enough to protect these cats?

I do think that the solution is in a menu of things rather than one magic bullet. There’s a 27 billion-dollar-a-year illegal wildlife trade, that’s going to take more than the $1 million a year we have via the Big Cats Initiative to fight. We almost need to declare war on this, which is what we are doing.

It will be rhinos, elephants and lions that are gone. Unless we take this seriously, we will lose these animals very soon.

When you're creating a film like this that documents the struggle of a species, how do you keep yourself from interfering with the natural order of things?

DJ: This is something that’s come up over and over. We’ve said to ourselves that we can get emotionally involved in these things but we can’t get physically [involved] -- the one rule that we have is that we do not interfere. When we see a lion with a broken back, that is what it is. We sit there and we film it.

For us to step in there and suddenly play god with these animals, we don’t do that. But we do intervene where man has played a role in creating damage. If we go out and we find a lion with a spear [in] it, we do everything we can to fix that.

BJ: That extends all the way into it -- we’re very, very strong advocates against hunting. I think that what hunting’s done, it’s a combo of greed and ego and ignorance. The hunters themselves probably don’t know the damage they’re causing.

DJ: There’s a wonderful scene in the film with a whole lot of bigger male lions that tackle a smaller one. We could’ve intervened but we didn’t, because that’s what happens. If you do interfere, you actually save the weakest –- it’s a bigger picture that we observe largely and participate [in] only if we need to rectify a wrong. 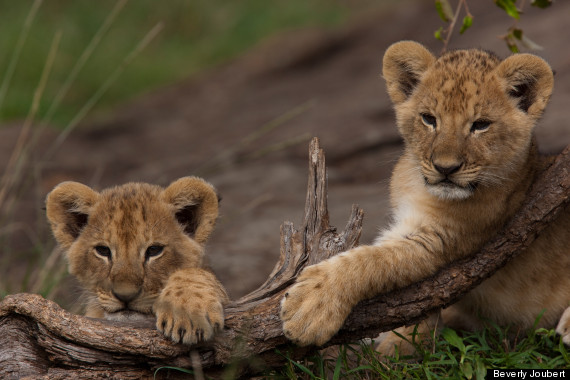 Two young male cubs play on a branch in the Masai Mara in Kenya.

What keeps you fighting for the lions?

I really think it’s all about each discussion, each film making an impact. We’re running out of time and that’s why there’s such an urgency to speak about it now.

To find out how you can get involved, head over to the Big Cats Initiative.

Dereck And Beverly Joubert; Explorers On The Front Lines Of Lion Conservation
The World's Most Threatened Species