A horrifying crime scene in South Miami hit Facebook Thursday when a man posted a photo of his dead wife -- and a confession that he had killed her.

Derek Medina posted the photo some time around noon Thursday, with the words "Rip Jennifer Alfonso." The image shows his wife's leggings-clad body slumped backwards on the floor in what appears to be the couple's kitchen. Her face and left arm are covered in blood.

"You will see me in the news," reads a confessional status update posted minutes before the photo:

According to an arrest affidavit by Miami-Dade Police, Medina told investigators he and Alfonso had a verbal dispute around 10:00 a.m., during which he grabbed a gun from a closet and pointed it at his wife. She reportedly told Medina she was leaving him before the dispute moved downstairs.

There, Medina told police, Alfonso began punching him. He retrieved the gun from upstairs and again confronted his wife, prompting her to pick up a knife. He told detectives that when he took the knife away, his wife began hitting him again, at which point he shot her several times.

After first changing his clothes and making contact with relatives, according to investigators, Medina drove to the South Miami Police Department and turned himself in.

When officers responded to the home, they found Alfonso dead from apparent gunshot wounds.

They also found her 10-year-old daughter upstairs, physically unharmed. She was removed from the house covered in a blanket, according to WSVN.

Miami New Times reports Medina has authored a number of self-help e-books, including one titled "How I Saved Someone's Life and Marriage and Family Problems Thru Communication."

A neighbor told NBC6 that Medina "walks around with a concealed gun, so he tries to be the neighborhood watchguy."

"He's always there late night and he's weird to me," said Yoshi Dade. "He's always kind of looking around and trying to be a hero."

Medina's father told WSVN that the couple had a troubled relationship, and had remarried last year after previously getting a divorce.

Incredibly, Medina's grisly posts remained published on Facebook until just before 5 p.m. Thursday, when they appeared to have been removed.

"The content was reported to us," a Facebook spokeswoman told The Associated Press. "We took action on the profile -- removing the content and disabling the profile, and we reached out to law enforcement. We take action on all content that violates our terms, which are clearly laid out on our site." 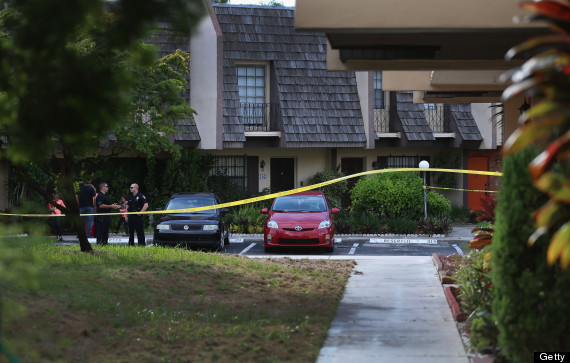 This post has been updated with details from police documents, official statements, and other newly available information.