A 26-year-old Kentucky man has revealed that his home was the subject of an aggressive raid by a group of FBI agents last month in connection with an Anonymous hack that helped publicize key social media events in the Steubenville rape case.

Deric Lostutter, also known by his screen name KYAnonymous, told The Huffington Post over the phone that on April 15, FBI agents raided the Winchester, Ky., house he shares with his girlfriend and brother and that he was told he could face jail time if he let the story get out.

Lostutter, a self-employed IT security consultant and self-described Anonymous member, said on his blog that he'd just returned from a turkey hunt when he noticed what appeared to be a FedEx truck in his driveway.

"As I open the door to great [sic] the driver approximately 12 F.B.I. Swat Team agents jumped out of the truck screaming for me to 'Get The F**k Down' with m-16 assault rifles and full riot gear armed safety off, pointed directly at my head," Lostutter wrote. 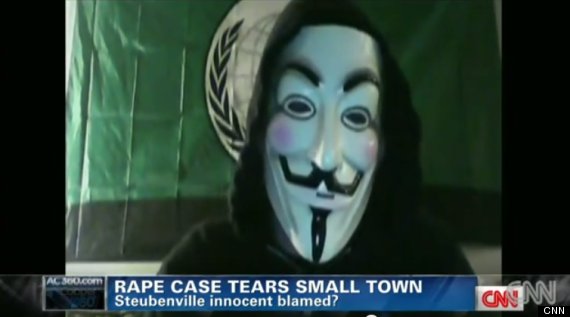 An image of Deric Lostutter, aka KYAnonymous, giving an interview to CNN about the Steubenville rape case while wearing a Guy Fawkes mask. "We are neither the judge nor the jury, but it's fair to say we are the executioner," he said during his interview.

The soft-spoken 26-year-old, who's also known by his hip-hop moniker, Shadowrapz, says he was a key figure in hacktivist collective Anonymous' efforts to publicize what happened the night an intoxicated 16-year-old Ohio girl was raped by two high school football players.

Lostutter says he was the one who published a trove of incriminating social media photographs, videos and messages that had been posted by Steubenville football players and that documented and ridiculed the victim.

"The tweets, screenshots, Instagrams. ... Pretty much everything you've seen in the media, that came through me," Lostutter said.

Lostutter also told HuffPost that the cache of social media posts was sent to him by Michelle McKee, who had received them from Alexandria Goddard, an activist and blogger, who had originally tracked down the posts, which at the time were publicly available and weren't obtained by hacking.

In March, two Steubenville high school football players, Trent Mays and Ma'lik Richmond, were found guilty of sexually assaulting a 16-year-old girl in August 2012; both youths were sentenced to serve time in a state juvenile detention center. Mays, 17, was also found guilty of distributing a nude photograph of a minor.

Judging from the FBI search warrant, which Lostutter has also published on his blog, the FBI was interested in seizing any evidence relating to the hack of the fan page for Steubenville High School's "Big Red" football team, RollRedRoll.com, and the site administrator's email, both of which were hacked in December of last year.

After the hack, a video appeared on the fan page. It showed a man wearing a Guy Fawkes mask, threatening to release social security numbers and other personal information of Steubenville football players unless they apologized to the rape victim by Jan. 1, 2013.

Lostutter told Mother Jones that he was the one in the video.

But Lostutter says he didn't hack RollRedRoll.com. A 22-year-old from Virginia Beach, Va., who goes by the moniker Batcat, took credit for the hack in an interview with the Steubenville Herald Star back in February.

Although Lostutter told HuffPost he never asked Batcat to hack the site, he admitted that he had approached "a lot of people daily" about different hacktivist "operations."

The FBI's search warrant for Lostutter's home states that he may have committed federal crimes such as "computer crimes" and "aggravated identity theft," as well as "identity theft, attempt and conspiracy."

Lostutter told HuffPost he received an email from the FBI saying he would receive a "target letter" indicting him for a federal offense as part of a federal grand jury trial. He has hired a lawyer from the Whistleblower Defense League, a legal activist group that defends journalists, whistleblowers and hackers.

If convicted of federal computer crimes, Lostutter could face up to 10 years in jail, Mother Jones reports. Meanwhile, convicted rapists Ma'lik Richmond and Trent Mays were sentenced to only one year and two years, respectively.

Hat tips to Gawker and Mother Jones for breaking the story.