By Heather Cooley and Peter Gleick

In a new report issued today, the Pacific Institute released the results of a year-long analysis of the complex and controversial costs of seawater desalination. The conclusion? It is still really expensive, especially compared to alternatives.

The Institute has long addressed the scientific, environmental, and financial issues associated with seawater desalination -- a technology often seen as having the potential to contribute to local and regional water supplies and reduce pressures on existing water resources as well as ameliorate the threat of droughts. 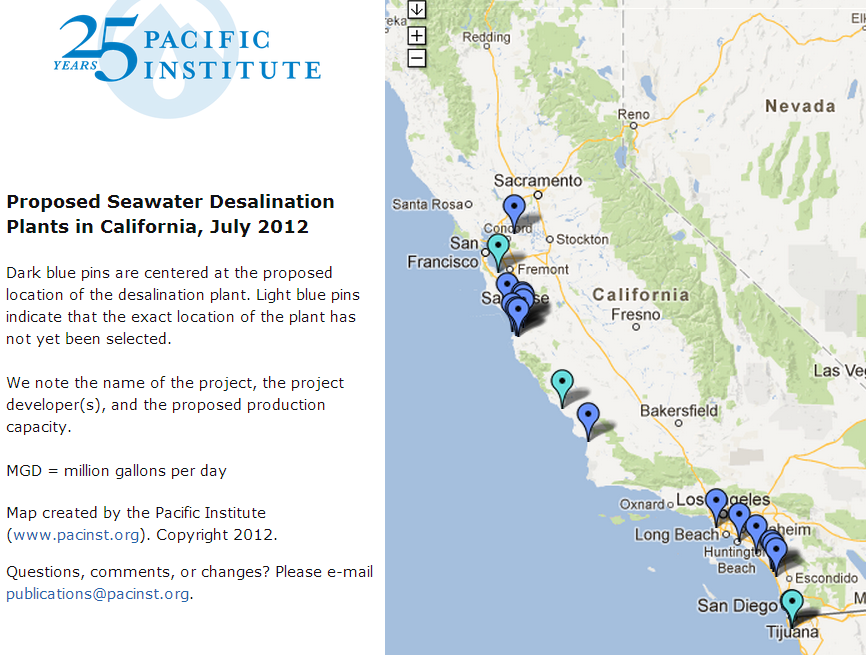 In the new report issued today, we provide detailed information about the cost of seawater desalination projects, how they are financed, and some of the risks associated with these projects. [The current assessments are based on research on operating and proposed desalination facilities and extensive interviews with industry experts, water agencies, community groups, and regulatory agencies.]

How much does desalination really cost?

Economics -- including both the cost of the water produced and the complex financial arrangements needed to develop a project -- are key factors (along with environmental, siting, and community acceptance) that will determine the ultimate success and extent of desalination. The predicted and actual costs to produce water from a desalination plant are highly variable. Despite some optimistic recent claims, actual estimates for plants proposed in California now range from $1.54 -- $2.43 per cubic meter (m3) ($1,900 to more than $3,000 per acre-foot). While the cost of seawater desalination has declined considerably over the past 20 years, desalination costs remain extremely high, and we see limited potential for any major cost breakthroughs in the near- to mid-term. Indeed, desalination costs may increase in response to rising prices of energy and other factors.

The report also argues that the public, media, and decision-makers should exercise caution and even some healthy skepticism when comparing cost estimates for different seawater desalination projects. In many cases, costs are reported in ways that are not directly comparable. For example, some report the cost of the desalination plant alone, while others include the additional infrastructure, e.g., conveyance pipelines, needed to integrate the desalination plant into the rest of the water system. Some estimates include the (often) heavy debt financing associated with the up-front capital costs of the project, while others do not. Even when there is an apples-to-apples comparison, site- and project-specific factors (such as energy, land, and labor costs) make cost comparisons difficult.

Adding to the costs are some risks specific to large water-supply projects, including "demand risk." Demand risk is the risk that future water demand will be insufficient to justify continued full-time operation of the desalination plant. As recent experience in the United States and Australia has shown, this risk is especially serious (and costly) if less expensive water supply and demand management alternatives are available, which is often the case. In Australia, for example, four of the six major desalination plants that have been built since 2006 are being placed in "stand-by" mode because water demand has been lower than expected or cheaper water is available. Yet the consumer must still pay for the shuttered desalination plants, even when they don't produce water. For the same reason, Florida's Tampa Bay Desalination Plant is operated considerably below full capacity, raising their unit cost of desalinated water even higher.

This risk is shifted to the public when water agencies sign "take-or-pay" contracts for water, requiring that they purchase minimum amounts of water even if actual water demand drops. Such contracts guarantee revenue for the seller but expose the buyer to demand risk and reduce the incentive for water agencies to pursue more cost-effective water supply and efficiency programs.

The Carlsbad Desalination proposal in southern California is a case in point. Originally proposed in 2002 at a cost of under $300 million (with a claim of $0.65 per m3 of produced water), official projected costs have now grown to nearly a billion dollars (as of late 2011), or to $1.66 - $1.86 per m3 (the actual cost would be even greater without grants and subsidies). And the plant still hasn't been built -- final costs are almost certainly going to be even higher.

How do these costs compare with alternatives? Desalination is more expensive: A recent analysis by the local San Diego County Water Authority finds that the marginal costs of new supply from brackish groundwater desalination and recycled water are considerably less. And the cost of water saved through conservation and efficiency measures is even cheaper -- exactly what has been seen in Australia and elsewhere.

[Future reports from the Pacific Institute will address the marine impacts of seawater desalination, the energy requirements and associated greenhouse gas emissions of desalination, and the permitting process.]