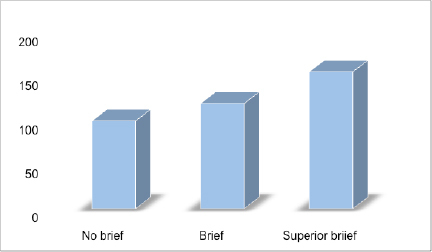 Designing without a brief is a lot like motoring without a steering wheel - in a word, dangerous. However, design briefs provide much more than a clear direction, expectation management and ensuring one's backend is covered down the road, in case of an accident.

Research collaboration between California State University Long Beach, Kookmin University in Seoul, South Korea, Stanford Design Quantification Lab initiative and ingomar & ingomar - consulting in South Pasadena, California, shows that simple, quick to use, Design Quality Criteria metrics can aid creating design briefs and evaluating their quality. The mere act of planning influences the quality of the final concept and, not surprisingly, brief quality is strongly linked to the quality of the project's outcome.

Our intuition is that we should create design briefs collaboratively. Our study showed that the very act of writing a brief, improves concept performance by twenty percent on average, while, already top performing designers achieve a twenty five percent performance enhancement from brief writing. Studies at Stanford Center for Design Research show that investing time in writing a superior brief can increase performance up to an additional thirty percent over average performing briefs.

So, - how much time is needed to create a design brief? Engineers at NASA's, Jet Propulsion Laboratory, (JPL) in Pasadena, California, recommend investing twenty five percent of a budget on brief/proposal writing, while design consultancies generally spend in the neighborhood of ten to fifteen percent on their briefs. A study by ingomar&ingomar - consulting in South Pasadena, California, of twenty-five Danish designers, showed that they spend between two and twelve hours on brief writing over a two to five day time period. Even if one is not designing a space mission, dedicating significant resources that are comparable to a fifteen percent cost of managing the subsequent project makes sound business sense.

Though writing design briefs is a creative way of problem framing and solving, its cost is usually absorbed by new business development. The fact that it is not directly billed to the client and not allocated to a specific project may inadvertently diminish the appreciation of its intrinsic value. When a design brief is perceived as a part of securing new business, which may only lead to a project in one out of three submitted briefs, one risks turning brief writing into an automated exercise just to keep costs down.

Unfortunately, if the client accepts the generic brief, the team can then be saddled with a brief that is not helpful in completing the actual design project on budget, on time and with a quality deliverable. Therefore, taking on joint ownership of co-creating design briefs and treating brief writing as an important phase in itself, has the potential to add tremendous value to the project, while also curbing risk and increasing creativity.

Special thanks to Jaewoo Joo and Shelley Takahashi for researching and co-writing this article.