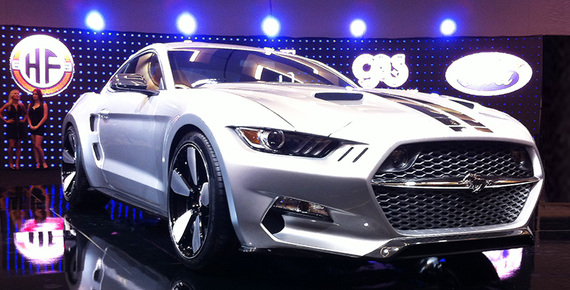 Designing heart-stopping, beautiful objects requires a perfect cocktail of design, styling, expression and aesthetic function - and is not for the faint of heart. Design thinking, design process or a branding matrix, are not sufficient to infuse artifacts with a visceral experience of intense beauty and desire. An essential ingredient is a natural genius combined with tons of practice and a sound approach in order to make the heart beat just a little faster when viewing an outstanding design.

Henrik Fisker, one of the world's leading car designers, has achieved this feat, not once, but multiple times with the BMW Z8, Aston Martin DB9, Vantage V8, the Tramonto, as well as the Karma. This week, at the Los Angeles Auto Show, he shared with us how his latest masterpiece, the new Mustang 725 "Rocket", was designed.

It took seven and a half months (six months for 2D design and six weeks for modeling) from the original concept to a fully functioning concept car and the metamorphosis began with a design brief. Henrik wanted to see a new interpretation of a high performance Ford Mustang and one that would be immediately recognizable as a Mustang, without being "retro." It would be built on a 2015 Ford Mustang, keeping expensive and time consuming exterior components, such as glass, lights and doors the same. The technical foundation would be a Galpin Motors specially tuned high performance sports package - delivering a substantial 725-horse power engine.

The intended user would be an aficionado of American Muscle Cars with an appreciation for European Design - leading to a projected production volume of a couple hundred vehicles per year, with a price tag of a little more than $100k.

For inspiration, Henrik chose his all-time favorite, the 1968 Mustang Shelby 350. Following the proportion - surface - details approach, Henrik set out to get the overall proportions right by first establishing the wheel size (twenty one inch) and wheel arches together with ground clearance. He then focused on the front and rear overhang, followed by body to glass proportions, adjusting the lines to incorporate the standard carryover elements. The artistry clearly shows through here.

The most prominent elements of a muscle car are the front and back sections, since this is the view seen in the mirror when a Mustang approaches from behind and then leaves one in the dust. So, the next step was to massage the surfaces, simplifying and softening the standard Mustang exterior.

Henrik opted to make the grill more prominent by reinterpreting the original expression of the tall opening divided by a chrome bumper. In Henrik's design, the chrome bumper is substituted with a polished aluminum element that acts as a horizon for the famous galloping Mustang pony.

The taillights were slimmed down, resembling laser lights and are surrounded by a carbon fiber moat across the width of the rear. An integrated spoiler was added to the trunk lid and follows the contour of the four exhaust pipes.

In keeping with the overall integrated feel, Henrik developed the detailing in line with past Mustangs. To cool the powerful engine and massive brakes, he reintroduced scoops in the hood, shark-like intakes by the headlights, followed by scoops for the front and rear brakes.

Beautiful design tells an appealing visual story and this one started out with what an American Muscle car might look like today. As the design was executed, the story developed into a cohesive narrative - finishing with a touch of "Bling." The speed stripes, together with the power output is magically revealed by removing ten grams of paint from the hood, exposing the underlying carbon fiber.

For a cohesive design expression to come together, the effort of more than one top tier designer is required. It also takes a large dedicated team of engineers, model makers and project managers. To realize his dream, Henrik teamed up with his good friend, Beau Boeckmann, president and COO of Galpin Motors, Inc.

Their passion, a strong, shared vision and a great team, created what few large organizations ever accomplish, - the enrichment of our emotional and physical lives with a car designed to give us an experience of unforgettable beauty and desire.