Better housing for the world's refugees is coming from a surprising source: IKEA. Yes, that IKEA -- the flat-pack furniture kings of Sweden. The company has designed a metal housing structure that's much more durable than the tents that millions of refugees all over the globe currently inhabit. The temporary homes (which are shipped to camps in flat-pack boxes) are constructed by Better Shelter, a Swedish social enterprise owned by the Housing for All Foundation, a non-profit established by the Ikea Foundation.

Refugees from Syria and other conflict zones are migrating to Europe at an alarming rate. According to the UN Refugee Agency, from the beginning of 2015 through November, more than 876,000 people arrived on European shores. In November, more than half of those people were women and children. The standard tents where most refugees reside do provide shelter, but lack electricity, security and privacy. Once in a camp, refugees can expect to stay anywhere from a few months to a decade or more.

The new IKEA-designed shelters cost a little over a $1,000 each -- almost double the price of the existing tents -- but offer some things the tents don't, such as privacy, security, electricity and durability.

"The refugee housing unit is an exciting new development in humanitarian shelter and represents a much needed addition to the palette of sheltering options mobilized to assist those in need. Its deployment will ensure dramatic improvement to the lives of many people affected by crises," says Shaun Scales, Chief of Shelter and Settlement, at UNHCR.

Units are about 60 square feet with four windows, two vents, and a door that locks. The inside of the structure is 6 feet high, making it easy for most people to stand and walk around. Since the design is completely modular, the structures can be easily repaired and assembled in a variety of dimensions to meet other camp needs (medical aid, schools, etc.). 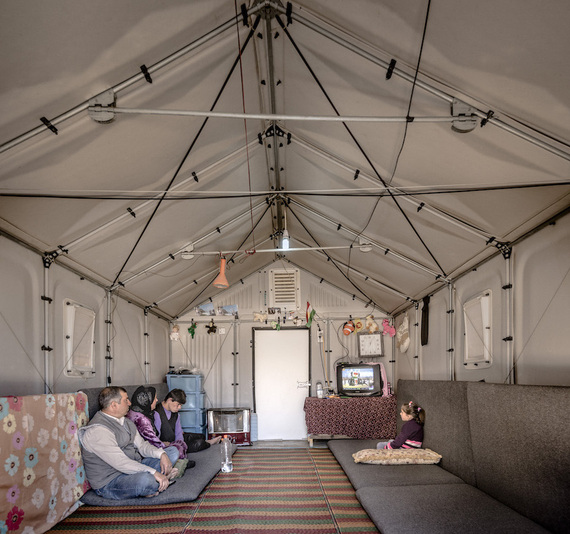 The shelters arrive in two large cardboard boxes that can be lifted by four people. In typical IKEA "build-it-yourself" fashion, all tools are included (because honestly, who flees a war zone with a hex key) and a shelter can typically be constructed in four to eight hours. The frame, consisting of interchangeable parts, is made of durable, lightweight stainless steel that can withstand the changing environment.

Electricity is provided to each structure through a solar panel installed on the roof. During the day, it charges an LED light inside the shelter that can be used for four hours at night. The light also has a USB port that can be used to charge a mobile phone.

In partnership with UNHCR, Better Shelter is deploying and installing these shelters in refugee camps around the world, including Iraq, Switzerland, Chad, Nepal and Greece. Over 4,700 units were delivered in the second half of 2015, and there are more on the way. UNHRC ordered 10,000 units in 2015 for use in their efforts to help refugees worldwide.