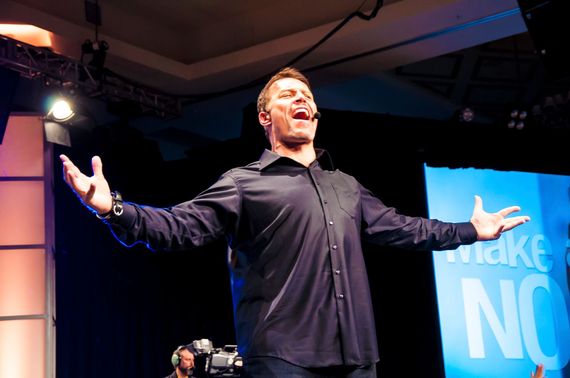 When my husband gave me the thoughtful gift of attending a seminar all about learning how to custom create my future, I found myself in a state of resistance. He had attended the same event the previous year and come back with a new intensity and fervor for life that knocked me off my feet. Why was I giving him such pushback? As a coach, I had committed the last fifteen years to an extensive array of training in the field of personal development. Was there that much more for me to learn? In prompting myself to go deeper, I resolved that my resistance was a clear sign that there was indeed much more for me to uncover on my own journey to becoming the best version of myself and in my quest to support my clients and loved ones to do the same. I remembered that it is imperative that we recommit to our own evolution every single day and strive to make consistent, right actions on a minute-to-minute basis. It was time to buckle up -- I had a date with destiny with none other than the renowned Tony Robbins as my chaperone and guide. I was committed to stepping up and to saying "yes."

Walking into the event, I felt like I was entering a party that others had already been at for hours. Many were jamming to the loud music while others were deep in the midst of their own meditation practice. It was apparent that so many of the attendees had already experienced an event with Tony Robbins and were back for more. Although I had convinced myself that I was walking in with an open heart, that old feeling of resistance and self-protectiveness returned. What did these people know that I had not yet unveiled? I quieted that part of me that contemplated walking out of this unfamiliar territory, and I realigned with my intentions for showing up in the first place. There was a reason that I was in that room with so many impassioned devotees, and I was committed to sticking around to find out why. It was time for some serious magic to unfold.

When Tony Robbins took the stage, I was captivated, to say the least. I had listened to some of his tapes growing up and seen him in so many interviews, but being in his presence was an entirely different experience. He made his intentions very clear straight off. He was going to energetically support each and every one of us to live an an extraordinary life by accessing our own personal power, mind, body and soul. As the hours flew by, his teachings rocked my world one moment and challenged everything I had ever believed the next -- all perfectly timed to a stirring soundtrack that had me floating between moments of uncontrollable weeping and amplified moments of sheer delight. This man was clearly making it his mission to move us all from a perspective of fear to an inner environment of love. I was intrigued, I was thankful and I was fully under the spell of this miracle master. I acknowledged, finally, that I was exactly where I needed to be.

My first breakthrough was brought on by a profound meditation that reluctantly took me back to my childhood. I was four years of age, witnessing my mother weeping on the floor upon learning that my father would be detained in our home country for an undetermined amount of time. I held and embraced my mom in a way that only my four-year-old self could, and, in that very moment, I made a subconscious yet pivotal decision about my life and the way that I would move through this world: "How could I protect and consistently care for everyone around me, at all costs?" Although this outlook had brought many gifts into my life, it had certainly also come with its own share of challenges. Uncovering this truth and deeply understanding the role that it had played for me thus far was instrumental. I could now give this experience a new meaning that would transform my past pain into power and redefine the course of my life.

Appropriately, the very next assignment on my path gifted me with an opportunity to put into practice precisely this new wisdom that had just been presented to me. I was confronted with yet another situation in which I was setting myself on fire to keep others warm, once again putting another person's needs ahead of my own. It was no coincidence that I was attracting this experience into my life over and over again, but with different characters playing the lead roles. The universe was doing for me what I had thus far not been able to do for myself by bringing this experience to me in that space and time. I recognized the opportunity and was marveled by the synchronicity of it all. I made a decision to step up, and show up for myself in a new, more empowered way. Acknowledging that the power was within me to confidently stand up for myself gave me the drive I needed to create a new story that was more authentic to the woman that I was destined to become.

The lessons and breakthroughs have continued well beyond destiny week, as each moment I am discovering new pieces of knowledge that are still working their way into my psyche. Sometimes new lessons show up when I am confronted with a fresh opportunity to respond to an old problem with a higher level of consciousness. Other times, I wake up from my sleep feeling activated and energized, knowing that deep healing took place throughout the night. I am cognizant now more than ever of the truth that my personal evolution is ongoing. I have remembered how imperative it is to stay open to new opportunities and to trust the process of all things. I now believe that achieving a beautiful state is accessible to me at all times, not only by using my mind, but by also using my body. Above all, however, I can say with full certainty that it is my greatest mission to be a source of light for others but with one important modification: I must first be a source of light for myself.

More:
healthy livingGPS For The Soulpersonal growthTony RobbinsPersonal Development
Newsletter Sign Up
An essential daily guide to achieving the good life
Subscribe to our lifestyle email.
Successfully Subscribed!
Realness delivered to your inbox