Computers and the digital technology available today have revolutionized architecture through new design, documentation and construction processes, as well as driving the development of new fabrication and construction methods. With the advent of new digital tools that allow us to work with parametric designs, more abstract notions, and complex geometries, arise designs with higher intricacies and more sophisticated definitions that call for a reevaluation and update of conventional fabrication processes and technologies.

In architecture and design we have adopted new fabrication tools developed for the automobile, aerospace, medical and manufacturing industries, but construction technologies still lag behind what we are able to generate today with the current computer design technology. This is mainly due to the fact that most architects are not familiar with many of the new fabrication tools available nor the processes needed to build and specify these non-standard designs, and overall the industry is not prepared yet to fully cope with the non-traditional bidding, contracting and approval processes entailed.

Some consultant firms like designtoproduction, by Fabian Scheurer and Arnold Walz, have precisely emerged to mediate and help architects realize their designs. Integrated by specialists from various fields, desingtoproduction helps architects, engineers and manufactures to plan, detail, optimize, simplify and materialize their non-standard ideas through non-standard processes of fabrication. They worked with Zaha Hadid, for example, at the Hungerburg Funicular stations, where more than 25000 doubly curved and shaped glass profiles were cut from polyethylene boards with a controlled five-axis router. All of the geometry and fabrication data, including the sticker ID of each part, was automatically generated through their parametric 3d model.

Laser cutters and computer numerical control (CNC) milling machines have been around for decades, by now they have been totally incorporated as mainstream architecture tools and they are a common technology in many architecture schools. They allow for the fabrication of non-standard components at almost the cost of mass production. However, as most of us have experienced, with intricate designs the vast quantity of unique and specific parts with their eight-to-nth numbers and letters labels require extensive planning and complex logistics, adding to many hours of labor organizing, assembling and adjusting the parts. Except for the successful use of these technologies to produce treated, perforated, or specifically cut panels for facades or interior walls, their use for more ambitious and complex constructions remains rare. There are some remarkable examples of design objects, interiors, or small experimental structures such as pavilions and installations, but these are still to be taken into a bigger scale.

What if instead of having to assemble a thousand pieces we could do bigger chunks of the building? Or even better, what if we could just 3d print the entire building? Well we can.

For those not familiar with 3d printers, they are an additive manufacturing technology, where by layering down successive layers of material the machine creates a three dimensional object from a digital model. The 3d printer software takes cross-sectional slices of the 3d computer file and each slice is then printed. Different materials and technologies are used; some printers lay liquid material that is cured in varying ways, others melt material to produce the layers.

Attracted to light by Geoffrey Man- A moth flight is captured through a 3d scanner and printed with a 3d printer- Image from http://cache.wists.com/thumbnails/5/de/5de7bf59e0ea90757cec0623abc354e5-orig
3d printed model for the PS1 canopy proposal by SU11 www.su11.com

3d printers where introduced about a decade ago, and since then they have significantly evolved, their cost has been reduced, and they have become a widely used technology. Nowadays you can find a commercial 3d printer the size of a fridge in many architecture firms and schools, used to produce in-house rapid prototype models of their designs. Some projects, such as Fab@home, MakerBot and RepRap, have even been pushing to make this technology affordable and available on a personal basis, so that anyone can 3d print from their desktop at home.

One of the main shortcomings of 3d printers when they initially appeared was the actual material in which the parts were printed. The resilience of the material, its appearance, and the resolution in which they print, have evolved since. And, whereas there were not many material alternatives before, today there are 3d printers that can work with clay, cement, sand and even titanium. There is also the technology to print with multiple materials and colors.

Another limit to the use of the 3d printer is the actual size it can print. Average bed sizes are 8x10x8 inches, while the more sophisticated ones can be up to 24x24x20 inches. This constrains the technology to be exclusively used for the visualization of small prototypes, remaining in most cases only a representation tool.

Could the size of these beds be increased to allow for larger prints? Yes, this is exactly what Enrico Dini did at his warehouse in Pisa, together with developing the technology to 3d print in stone. The result: being able to print buildings on a one-to-one scale. 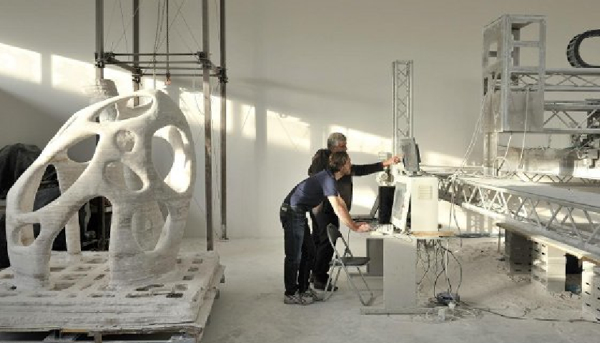 Enrico Dini's massive 6m x 6m 3d printer rests on four extendable pillars and works by depositing a structural inorganic binder on a sand layer in sections of 5-10mm. The process turns inorganic, cheap and ecological materials into a compact stone similar to marble. On a non-stop work session the machine starts from the foundation and constructs everything all the way to the top of the roof, including stairs, interior walls, columns, and even the cabling and piping cavities.

Dini has been collaborating with London architect Andrea Morgante, who has designed the first building to be printed. Morgante designed a gazebo based on a small micro-organism called Radiolaria, which has already been printed at quarter scale. The material contained in these model costed a total of only £60. The resilience to the elements of the model and its material is being tested before starting to print the actual building in full scale.

Radiolaria - designed by Andrea Morgante and printed with D-shape
http://www.d-shape.com

Cars are also being 3d printed today. Kor Ecologic partnered with Stratasys, and using Autodesk's software solution for Digital Prototyping, designed the first prototype car with a body created using a 3D printer. The Urbee was designed to be as efficient as possible and run on renewable energy, and aims to be the world's most environmentally friendly vehicle. With all of its exterior components -including the glass panels- created using Dimension 3D Printers and Fortus 3D Production Systems, Urbee is just one example of FDM being used for ecologically friendly initiatives. FDM has the advantage that it cuts down the tooling, machining, and handwork needed, becoming incredible efficient.

Another technology worth looking at -similar if you may to 3d printing in that it consists of an automated additive process of construction by layers-, is that employed by Gramazio & Kohler with their robot R.O.B. With their cutting edge work and their academic research at the ETH, Gramazio & Kohler have been key players developing innovative design-to-fabrication processes and exploring the potential of digital technologies that allow fabrication at full scale on site.

R.O.B. is a conveniently transportable industrial robot, it can be brought on site or work on a factory, works non-stop, and basically lays down the bricks to construct walls with complex curvatures and patterns. Prof. Ingerborg Rockler used a similar robot at his research studio in GSD to study the potential of this technology. The accuracy and speed of these industrial robots allow them to fabricate architectural forms of unprecedented complexity and intricacy that would have been almost impossible to do with traditional labor.

During the design process, the architects work with a set of scripted principles that allow for parametric manipulation of the wall designs to achieve different desired qualities and performance. Changing the offset or angle of the bricks, for instance, allows to control the curvature and porosity of the wall.

The "brick" can be any building unit, made of different materials and even of different forms. Take as example the custom-cut blocks Gramazio & Kohler to construct the arches at their Desingers Saturday, and you realize the potential of this technology is endless.

On a warehouse in Southern California, Guy Martin (contributor to the Huff Post) works with Marie, a multi axis CNC robot to materialize the most complex digital products. Guy Martin has being behind some of the most complicated creations of Phillip Starck, made possible by this advanced fabrication technology. Martin is an architect interested in working very close to the means of production and materials, and in digital fabrication he has found a method that reintegrates craft and control by the architect into the fabrication processes.

With his CNC robot he has also found a way of efficiently and cost-effectively being able to materialize complex designs. Trying to reduce cost by reducing the number of parts -and hence the time and effort spent in fabrication, installation and planning-, he is able to fabricate components in one run of up to 80 feet in length. Additionally, this technology allows to set up a downstream of all the necessary steps in the production process simplifying and making more efficient the whole operation. The big fabricated parts are then cut into the maximum length allowed by the transportation limits on size and weight.

Images by Guy Martin at http://www.archdaily.com

Machineous also provides similar services to fabricate custom architectural designs with their multi axis CNC. They have worked with Gregg Lynn in his blobwall project as well as in his toys projects. The robot arm technology used allows for outstanding programming and physical reach flexibility.

Digital fabrication yelds a wealth of architectural invention and innovation, and questions the traditional roles and processes in architecture and construction. To materialize the ever more complex designs, architects have to re-evaluate fabrication methods, which will in turn also inform the design. The translation from virtual design to physical reality through digital fabrication calls for a new relation and involvement of the architect with the material and methods of production. Digital production is a generative medium, with its own restrains and possibilities. Digital-to-fabrication processes have the potential to narrow the gap between design and building, and revolutionize the entire architecture and construction industries.