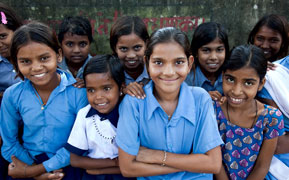 Child marriage is one of the most shocking and disturbing practices facing girls around the world today. Every year, ten million girls are forcibly married before the age of eighteen, many as young as twelve or thirteen years old. That is something like 25,000 girls a day. These young girls suffer sexual abuse and domestic violence and are frequently forced to become mothers at a very early age, putting them at a much higher risk of maternal injury and death. The epidemic of child marriage has mostly received little attention and continues unabated year after year. An organization called The Elders, a group of global leaders brought together by Nelson Mandela in 2007, seeks to change that, launching an ambitious Global Partnership to End Child Marriage called Girls Not Brides that aims to stop the harmful practice in one generation.

This week, a delegation from The Elders, including Archbishop Desmond Tutu of South Africa and former President of Ireland Mary Robinson, will visit India with a focus on girls' development and the impact of child marriage. The primary objective of the Elders' visit is to learn about the causes of child marriage in India, discuss the harmful impact of child marriage on human rights and development, and to encourage local efforts to end the practice. The Elders will meet political and business leaders, UN and NGO representatives, members of the media, and communities affected by child marriage. Because of its large population, India is home to an estimated one third of the world's child brides. The Elders will visit New Delhi and Patna and will also attend a regional meeting hosted by Girls Not Brides.

I asked Archbishop Desmond Tutu and Mary Robinson about the implications and factors contributing to child marriage and their hopes and goals for the Girls Not Brides Partnership.

Why is the issue of child marriage important to you and to The Elders?

Desmond Tutu:Until the Elders started working on child marriage, it had not occurred to me how little the girl child is even thought about in broader efforts to lift people out of poverty and defend basic human rights principles. The most vulnerable in my view are those girls who are married young. I knew that there was an institution of child marriage, but I was devastated to discover how widely it occurs, and on such a huge scale. It is hard to fathom that this year alone some ten million girls will marry before they turn 18 and many of those will be as young as 12 or 13.

Last year I went to the Amhara region of Ethiopia where I met girls and women who were married at eight and ten years old. It's one thing to hear experts talking about child marriage, but it's quite another to meet these girls and hear their stories. You realize this affects every aspect of their lives: they leave school before they can complete their education; their young bodies bear children before they are physically ready to do so; they're unable to negotiate safe sexual practices with their older husbands. They really are some of the most vulnerable and voiceless people on earth.

Marianne Schnall: What are the implications for girls - and for their families, communities and the world - of child marriage?Mary Robinson:It's hard to exaggerate the scale of the problem: in the next decade it's estimated that 100 million girls will marry before they are 18. That's a staggering level of lost potential. There are few places where this is more evident than in India, which is home to one third of the world's child brides.

The benefits of delaying marriage for girls are felt community-wide. Girls stay in school and gain the opportunity to learn skills that will better equip them to work and contribute economically to their families and community. Their children will benefit too. Sadly, babies born to mothers under 18 are 60 per cent more likely to be poor, and are at much higher risk of dying in their first year of life than those born to older mothers.

There is a lot of impressive work being done by local activists and NGOs in India that have recognised that these girls are one of the country's greatest sources of untapped potential. I'm very much looking forward to seeing their work for myself when I visit India with Archbishop Tutu and other Elders.

MS: What are the factors that cause parents and society to allow and even encourage child marriages to take place?

Desmond Tutu:I am convinced that there is no mother or father on this earth who doesn't want the best for their child. Indeed, many parents marry off their daughters young because they feel it is in her best interest, often to ensure her safety in areas where girls are at high risk of physical or sexual assault.

And of course poverty, too, is an important perpetuating factor. Who am I to criticize the decisions of parents who live in extreme poverty with large families to support who decide to marry their daughters young because they simply can't afford to feed her, or because of the bride price that she can fetch? Sadly in many communities where child marriage is practiced, girls are not valued as much as boys - they are seen as a burden. The challenge will be to change parents' attitudes and emphasize that girls who avoid early marriage and stay in school will likely be able to make a greater contribution to their family and their community in the long term.

I must also stress that no major religion promotes the practice of child marriage. Child marriage is a traditional practice that happens today simply because that is the way things have been done for many generations. We have met some brave religious and traditional leaders who recognize the harmful effects of child marriage and who are actively encouraging their communities to end the practice, but unfortunately, in countries where this is common, they're still in the minority. We want to encourage men and boys to stand up for their daughters' and sisters' rights. Community leaders and religious leaders, fathers and brothers can all join the effort to end child marriage.

MS: What will it take to end the practice?

Mary Robinson:First, we need governments to show their support at a legislative level, to enact and enforce a legal minimum age for marriage. I was encouraged to see that Human Rights Watch, a member of Girls Not Brides, recently issued a report calling on the government of Yemen to introduce a minimum age of marriage in a country where more than half of girls are married before they turn 18.

But legislation alone will not end entrenched traditional practices. Among the most effective efforts to end child marriage have been community mobilization and empowerment programs that encourage dialogue among parents, religious leaders, village councils, teachers - everyone. Over time these people often come to a collective decision to stop marrying their daughters off very young. We've been impressed by the fact that these programs are changing the attitudes of men, some of whom have become the most active advocates for change.

Above all, we need to empower girls. We need to improve their access to quality schooling as school attendance has been found to help shift attitudes and ideas that surround child marriage. We also need to provide support networks and create safe spaces where girls can gather and meet, reducing their sense of isolation and vulnerability.

Desmond Tutu:Simply put, we do not have to accept that child marriage happens because it is just 'how things have always been', or that it is a tradition and can't change. What we want is for world leaders to make sure this change happens on a global scale. I'm going to the World Economic Forum in Davos to encourage leaders to implement at regional and national levels programs that have been proven to prevent child marriage. It's the kind of work that's being done already by people at a local level. Now just imagine the scale of change possible if our leaders followed their brave lead...

MS: What are the mission and goals of the Girls Not Brides Campaign?

Desmond Tutu:We Elders are a humble bunch! We initiated Girls Not Brides, a global partnership of activists and organizations committed to ending child marriage, because we realize that there are a lot of people out there who know much more about child marriage and who already are doing some truly admirable work to end the practice. What we hope to do is to bring together this collective wisdom, to learn from each other what works - and what doesn't - and to use our collective clout to bring this issue to global attention. In many ways, it echoes the philosophy behind The Elders, that by working together we are stronger.

Mary Robinson:Change will be made at local, national and international levels. By building a global partnership we hope to harness all the resources and information that Girls Not Brides members have collected to bring home the injustice of the practice, to make important changes to development policy and investment, and to bring home the fact that for 10 million girls a year their wedding day is a day of loss.

To learn more or get involved, visit www.GirlsNotBrides.org and watch a Girls Not Brides short educational video here.

Portions of these interview originally appeared in an article at the Women's Media Center.

Marianne Schnall is a widely published writer and interviewer whose writings and interviews have appeared in a variety of media outlets. She is also the co-founder and executive director of the women's website and non-profit organization Feminist.com, as well as the co-founder of the environmental site EcoMall.com. Her new book, based on her interviews with a variety of well-known women, is titled "Daring to Be Ourselves: Influential Women Share Insights on Courage, Happiness and Finding Your Own Voice".