As the Church of England celebrates its 20th anniversary of women ordination as priests, Archbishop Desmond Tutu sent a candid and enthusiastic note of congratulations to female clergy members that concluded with "Yippee!"

His note also included a subtle dig at the Church of England, which does not currently ordain women as bishops, though it is expected to do so later this year.

Tutu, a member of the Anglican Church of Southern Africa, called out the Church of England by saying, "Now we have the first two Anglican women bishops on the African continent and we are asking ourselves why we were so stupid for so long."

The Church of England voted on whether to allow women to become bishops in 2012, but fell short by a mere six votes. The vote was passed in 2013, with the first female ordinations expected to take place later in 2014.

Archbishop of Canterbury Justin Welby acknowledged the continuing struggle for gender equality in his sermon and personally apologized for the harm done by the Church.

Welby commented, "In 20 years we have come a long way: How did we not see that women and men are equally icons, witnesses, vessels of Christ for the world?"

As with our own Anglican Church of Southern Africa, amazing enrichment has come to your Church from this, yes, epoch making decision. We realised how much we had denied ourselves until 1992. Now we have the first two Anglican women bishops on the African continent and we are asking ourselves why we were so stupid for so long.

In your own Church, women have already demonstrated your splendid giftedness; I know without looking it all up on Google that women are the Deans of at least three Cathedrals: Salisbury,York and Norwich. Isn’t that just something? And there is a noteworthy clutch of women canons and isn’t the Archbishop of Canterbury’s chaplain a woman?

Yippee to you all. I hope I can join in the consecration of the first C of E woman bishop!

God be praised for all of you. Thank you for all that you are bringing to enrich our fellowship.

Much love and blessings,

See photos from the Church of England's celebration here: 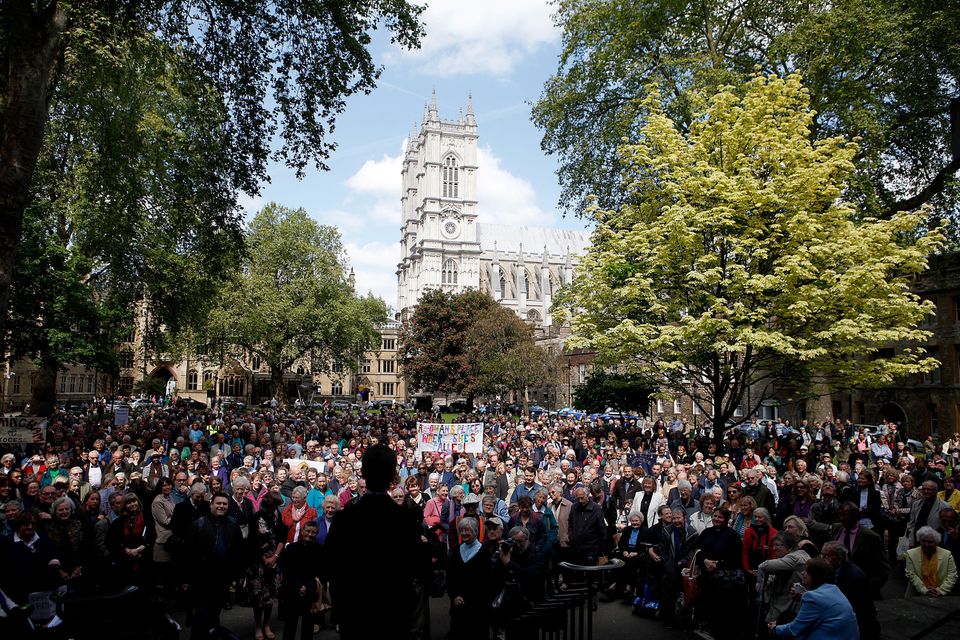 1 / 46
LONDON, ENGLAND - MAY 03: A crowd of over hundreds of women priests listen to speeches at Dean's Yard, Westminster before marching to St Paul's Cathedral for a special service with the Archbishop of Canterbury, Justin Welby, to celebrate twenty years since the ordination of women priests became possible, on May 3, 2014 in London, England. The service comes ahead of a vote in July when the Church of England is expected to pass legislation that will allow the women in the church to be ordained as Bishops. (Photo by Mary Turner/Getty Images)
Getty Images