In just a few short weeks, the world will observe the 10th anniversary of the 9/11 attacks. Even though Osama bin Laden was killed on May 2, 2011, part of his legacy lives on in the most perverse way imaginable.

One of bin Laden's stated goals was to bring about the total financial collapse of the American economy. Although bin Laden may no longer be alive to accomplish the job, it seems as if the congressional members of the Tea Party are determined to do it for him. In an article entitled "The Tea Party's Terrorist Tactics" that was posted on Politico on July 29, William Yeomans wrote:

It has become commonplace to call the tea party faction in the House 'hostage takers.' But they have now become full-blown terrorists. They have joined the villains of American history who have been sufficiently craven to inflict massive harm on innocent victims to achieve their political goals. A strong America has always stood firm in the face of terrorism. That tradition is in jeopardy, as Congress and President Barack Obama careen toward an uncertain outcome in the tea party-manufactured debt crisis.

Our military's oath of enlistment (as well as the oath for commissioned officers) reads as follows:

Who would have thought that, in his roles as president and Commander in Chief, Barack Obama would have to defend the Constitution against political and economic terrorists -- in both the U.S. House of Representatives and the United States Senate -- who were willing to risk default in order to pursue a radical ideological agenda? Although the compromise reached Sunday night to raise the debt ceiling left both sides indignant and feeling betrayed, let me recommend four recent articles that dissect the crisis from a more level-headed and less outraged perspective:

Each time I hear venal pundits and delusional Republicans spewing misinformed bile about the so-called "liberal agenda" or "gay agenda," I'm amazed at their inability to examine the wreckage left in the wake of their own "conservative agenda." Let's face facts: When it comes to reckless spending, a lack of ethics, and the absence of any kind of moral compass, nobody can beat the Republicans at their own game.

The sad truth is that, following the binge-and-bust cycles of the Bush administration, we're left in a particularly unpleasant situation. In the following clip, Judy Garland and Mel Tormé sing that classic song from 1956's hit musical, Bells Are Ringing: "The Party's Over."

How people act when they are broke and desperate offers a keen insight into their priorities. Are they able to step up and do the right thing? Or have their souls become so twisted, their priorities so warped, their appetites so depraved, and their behavior so dysfunctional that the harm they might inflict on others doesn't even matter to them.

The key to understanding such twisted behavior lies in a person's ability to rationalize his actions. A friend of mine who was heavily into S&M once insisted that "The reason lawyers make the best bottoms is because they'll do absolutely anything! "

A perfect example of exuberant amorality can be found in the Act I finale of Stephen Sondheim's 1979 musical thriller, Sweeney Todd: The Demon Barber of Fleet Street. In the following video clip, Mrs. Lovett (Angela Lansbury) and Sweeney Todd (George Hearn) hatch a culinary scheme to get rich quick:

Just when you think there could be no new twist on the age old combination of greed and corruption, two new dramedies allow audiences to view financial crisis management through opposing lenses of comedy and tragedy (proving, once again, that denial is not just some river in Egypt).

In describing how he came to ridicule Nazis in the stage and film versions of The Producers, comedian Mel Brooks stressed that:

I was never crazy about Hitler. If you stand on a soapbox and trade rhetoric with a dictator you never win. That's what they do so well; they seduce people. But if you ridicule them, bring them down with laughter -- they can't win. You show how crazy they are.

That's exactly what Brooks achieved in his legendary musical number, "Springtime for Hitler":

Patricia Milton's new play, Reduction in Force, just received its world premiere from Berkeley's Central Works and it is a doozy! Billed as "a new comedy about back-stabbing, ass-kissing, and survival of the sneakiest," it has been directed by Gary Graves with a grand sense of timing and snarky revenge. The play's three characters are 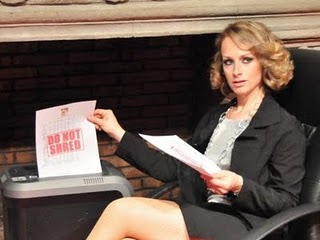 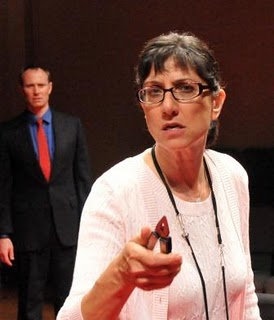 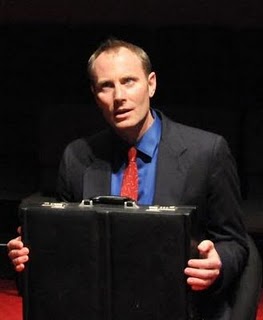 Mitch (John Patrick Moore) holds a briefcase filled with
more than half a million dollars in Patricia Milton's
Reduction in Force (Photo by: Jay Yamada)

The fun begins when Gabby announces that, due to a "reduction in force," she's going to have to make a choice between Anita and Mitch (only one of whom will be able to stay on as an employee of Icarus). While Gabby derives great satisfaction from pitting her two subordinates against each other, the last thing she expects is that they would team up against her and plot to bring down Icarus.

Revenge may indeed be a dish that is best served cold, but watching these three quick thinkers desperately juggling power like a hot potato is vastly entertaining. Reduction in Force is that all-too-rare theatrical bird: an intelligent, fast-moving farce about high-risk dysfunctional behavior in the nation's most precarious financial markets.

While Gabby may like to take work breaks with "Mr. Yummypants" two floors below that include cocaine and handcuffs, all of the criminal activity at the Icarus Wealth Management Group is done on computers and is strictly of the white collar type. Things get more brutal and bloody in Polish Bar, an intense new indie film written and directed by Ben Berkowitz that was recently screened at the 31st San Francisco Jewish Film Festival.

The backstory to Polish Bar can be summed up in one simple question: "What's a nice Jewish boy doing selling drugs to lowlifes while working as a Hip hop deejay in a strip club owned by goyim?" Reuben (Vincent Piazza) essentially leads a double life: 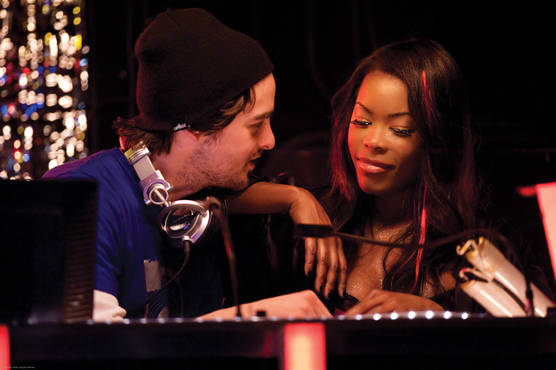 Reuben's schizophrenic lifestyle is heavily influenced by the people he meets through his work.

The pressure starts to build when Reuben's connection, Fat Moe (Chingy), suddenly can't provide him with any more cocaine. 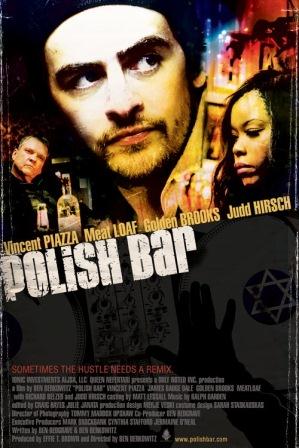 Needless to say, Reuben's increasing desperation for the $20,000 leads him to the safe in Uncle Sol's jewelry store. Upon discovering the theft, Sol promptly fires the innocent José (Joe Minoso). When Ebony attacks Reuben during an argument in the bar, he ends up in jail. Neither Joe nor Tommy come to his rescue, but Hershel gets him released from prison.

The shame is too much for Reuben's mother to handle. After learning of Reuben's deceit, Uncle Sol doesn't even want him to sit shiva with the family following Avram's death. Torn with guilt, Reuben pays his respects to his grandfather at the funeral home, where a Rabbi (Bernie Landis) tries to comfort the young man with the knowledge that staying up all night with the dead is the biggest and most generous mitzvah possible. Why? Because a dead man can't thank him for what he's done. 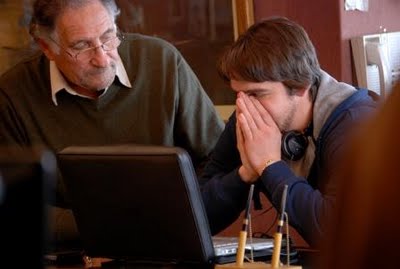 "Polish Bar evolved out of the things I was doing to pay the bills between making films. I worked on 47th Street in Manhattan, the world's largest and busiest jewelry district. Millions upon millions of dollars worth of precious stones and metals permeate the area. When you walk along 47th Street you feel it surrounding you, drawing you in like a magnet. When I returned to Chicago I spent a lot of time in Jewelers Row on Wabash Avenue. At night I would earn extra money DJing at a strip club. I began to see similarities between the grimy strip club and the glossy sleaze of Jewelers Row. Both harbor such desperation, greed, manipulation, and countless levels of deception. Everyone competes for the customer's money and a food chain is created."

Polish Bar is very much the story of someone who, caught in a tight spot, has no choice but to "do what he's gotta do." It's an impressive drama that, as a meticulously-cast independent film, has a gritty style all its own. Here's the trailer: