In about 24 hours, one of the world's biggest cities will get even bigger. After years of preparation, Shanghai World Expo 2010 will finally begin. It will last from May 1st until October 31st, and is expected to attract 70 million visitors, making it the largest in the history of world expos.

Guests will be able to see the nearly finished expo site, which takes up 5.25 square kilometers on both sides of Shanghai's Huangpu River. I have spent the past two and a half weeks working as a student ambassador at the USA National Pavilion, and I must say, I now understand what my mother meant when she used to say "Do you think this just magically appears?" With 192 countries and 50 international organizations setting up shop at the expo, coordinating communication, housing, security, and transportation have become nightmarish tasks.

Security is tight, and is constantly changing. Just this morning, while I was walking to board the shuttle bus from my apartment at the Expo village to the Expo grounds, I passed by a couple of visibly flustered Danish gentlemen. They expressed to me that the temporary passes that they had been issued by the Expo Bureau had been suspended, not allowing them passage onto the Expo grounds. 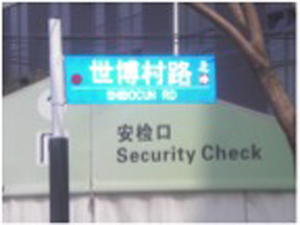 "Our president is coming soon, and we're not yet finished!" one said. Another chimed in, half-joking, "Guess we'll just have to jump the fence." Isn't it an electric fence?

Transportation has also been difficult. Because the expo is not open to the general public yet, the "green" buses that are supposed to conveniently take workers as well as guests around the expo are not running consistently. Buses that run one day don't run the next, and often run at awkward hours that have made things a bit difficult of us on the ground.

Despite the fact that most of the pavilions were not finished, the Expo was opened last week to about 200,000 people, mostly local Shanghai residents, for a couple of "soft opening," days.

Here at the USA Pavilion, things were certainly chaotic. Our site is expected to be the 2nd most visited at the entire Expo (behind China's pavilion), so EVERYBODY lined up to see the USA.

The unique part of our operation here at the USA Pavilion is that we are staffed with about 75 Student Ambassadors like myself that are responsible with greeting guests, managing queue lines, and really being "the face" of the U.S. to guests at this Pavilion.

Unfortunately, still jet-lagged and inexperienced, we were not nearly prepared to handle the thousands of people that lined up to see the Pavilion. Because the majority of the site was not finished, guests were lining up to see really only an equivalent of a "teaser trailer" - our main lobby that has a fun video featuring Americans struggling to say "Welcome to the USA Pavilion" in Chinese.

Many people didn't get the message that the entire pavilion was not open, and when the pavilion closed a bit unexpectedly around one, many were leaving confused and disgruntled. Talk about a crash course in crowd management!

These first few weeks have been rough, no doubt. The schedule is disorienting. The flow of information around Expo is chaotic.

But, even amidst the craziness, I think the preparation for the Expo has exemplified what the Expo is all about. Day one's experience allowed us to better prepare ourselves for the real deal. More importantly, after the first few minutes of tension with our Chinese guests we began interacting with the crowd. I got up on a ledge and said, over and over in Chinese "The American pavilion is closed, but feel free to check out our gift shop!" The crowd laughed, and so did I. The buildings are nice, but the personal exchange is what will make this Expo a success. The visitors probably will not remember what all the pavilions look like, but they'll remember the laowai (foreigner) that spoke to them in their own tongue, and volunteered to take a picture with them.

The Expo, themed "Better City, Better Life," gives us an opportunity to imagine the world as we wish to see it. With thousands of Chinese guests, and hundreds of country delegations representing different cultures and speaking different languages, it is a picture of the world working together and learning from each other. And I believe that imagination is the first step to innovation. I've learned this over the past two weeks. Day two was better than day one, and even though we got a late start at Expo 2010, the USA Pavilion is set to be ready by the May 1st deadline.

Despite the long lines and the hot summer sun, the Expo offers an amazing glimpse into our present and future, one in which technology and international collaboration can create a better world. It is definitely worth our attention, and worth the trip!