When the Supreme Court legalized marriage equality in June 2015, LGBTQ people across the country celebrated a monumental achievement, gained through the persistence, dedication and hard work of countless individuals over many years.

This victory was a long time coming -- but it was by no means the end to the LGBTQ community's struggle for equality and acceptance. There is much work still to do to ensure that every American -- no matter where they live, who they love or how they identify themselves -- has the freedom to live their lives with dignity and respect, without fear of hatred or discrimination.

That's why leaders of a wide variety of LGBTQ organizations came together to create the Our Tomorrow campaign -- to engage LGBTQ people from all walks of life, across the country in a conversation to shape the future of a bigger, bolder movement that leaves no one behind and no important issue unaddressed. For the movement to maintain its momentum and keep making progress, it couldn't rest on its laurels. We needed to look forward -- together.

Over the course of four months in the summer of 2015, more than 5,500 individuals from all 50 states shared nearly 15,000 hopes, fears and ideas for the future with Our Tomorrow, either at grassroots events in more than 40 U.S. locations or online at ShareOurTomorrow.org. Altogether, these results represent one of the largest and broadest data sets ever created about the concerns of LGBTQ people and, according to The Advocate, "[presents] a clearer picture than ever before of the U.S. LGBT community."

And with the release of the final report on the Our Tomorrow conversation, Insights From The Conversation: What's On The Minds Of LGBTQ People?, that picture has crystallized even further -- and it's clear that LGBTQ people remain worried. Despite much of the conversation focusing on recent victories and successes, many submissions revealed a prominent fear of loss among participants.

In discussing their fears for the future, Our Tomorrow participants highlighted what they described as growing opposition to LGBTQ equality -- often led by religious and conservative voices. In the face of recent victories, participants explained, the movement may face a backlash from opponents who would seek to revoke existing rights and protections, amp up their efforts to discriminate and implement campaigns for renewed violence and hate.

In fact, linguistic analysis shows that when participants shared fears regarding rights for LGBTQ people, they were overwhelmingly discussing their "worry" about potential "backlash" from "religious, conservative and Republican voices," as depicted in the image below. 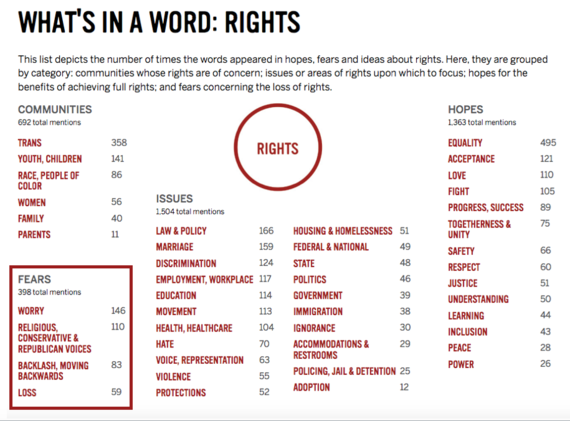 As one participant named Garrett from Virginia put it in his comment, which was representative of the fears expressed by many others: "The ongoing battle for LGBTQ rights and legal protections has not been easy and it's certainly not going to get any easier. I worry that if the Supreme Court legalizes same-sex marriage nationwide that an unprecedented backlash will ensue as religious fundamentalists seek to hurt us in other ways."

Unfortunately, we've already seen this ugly reality play itself out in the headlines since last summer's historic ruling. Opponents of equality have undoubtedly renewed their efforts to roll back rights for LGBTQ Americans -- often using scare tactics and outright falsehoods to demonize trans people, hoodwink voters and gut key protections for the entire community.

The first shot was fired in Houston in November, when a widespread misinformation campaign succeeded in convincing voters to overturn the city's anti-discrimination ordinance at the ballot box. Since then, countless copycat efforts have sprung up in states and municipalities across the country, aiming to legalize discrimination against LGBTQ people in the name of "religious liberty." Most recently, statewide efforts in Georgia, North Carolina and Mississippi succeeded in securing legislative passage.

These disheartening developments make it painfully clear that, while the movement has undoubtedly made great progress and won significant victories in recent years, the fight for equality and acceptance for all LGBTQ people is still far from over.

But the community isn't giving up -- far from it. Because in addition to highlighting the very real anxiety that many LGBTQ people are feeling about the future, the Our Tomorrow conversation also revealed that the community as a whole remains decidedly optimistic about its ability to overcome these challenges. There was no shortage of great ideas expressed for how to do that, but one idea rose to the top again and again. 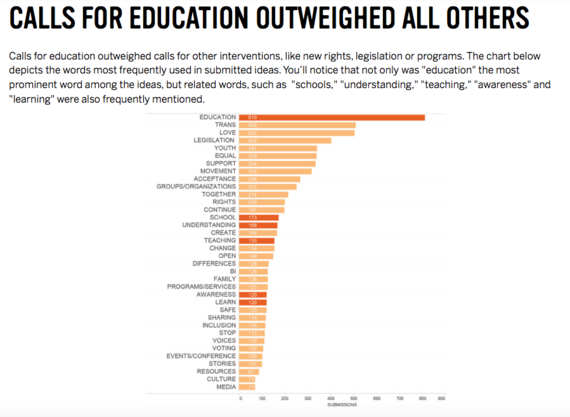 "Education" was the number one most mentioned idea by Our Tomorrow participants, far outpacing all other potential interventions, like new rights, legislation or programs. The term was mentioned 1,047 times throughout the conversation, and in 77 percent of those instances, it was invoked as a key idea that could help LGBTQ people bust through centuries-old layers of misinformation and misunderstanding and into a brighter, more accepting future.

Steve Pierce is a senior associate at Hattaway Communications and served as the lead strategist for the Our Tomorrow campaign.