In their speeches at the Republican and Democratic national conventions, Ann Romney and Michelle Obama both tackled the topic 'raising kids in America' and how to find time to parent in their busy lives. And they were passionate about it. Ann Romney said "I don't think there's a woman in America who really expects her life to be easy," while the First Lady pointed out "my most important title is still mom-in-chief.

Despite partisan differences, they were expressing the same view: to them, motherhood is the most important job in the world, and one that they put first. And if raising kids isn't easy for these women, who have active and attentive co-parents to help them, imagine the strain for an increasing number of single moms and dads who have the even bigger job of raising children on their own.

One in four American children are now being raised in single parent households, a number that is on the high end for industrialized countries, according to a study by the Organization for Economic Cooperation and Development (OCED). That figure is expected to continue rising, according to the report, accounting for 34 percent of American children between 2025 and 2030. 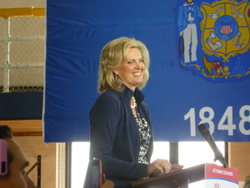 But whether it's two-parent or single parent homes, we often forget how hard the job of childrearing is, which is why I applaud Ann Romney and Michelle Obama for raising this issue on the national stage. Parenting holds incredibly tough challenges due to vastly changing lifestyles, conflicting priorities and constant scheduling demands. Forget the fountain of youth. The big secret parents are searching for is how to squeeze more time out of each day for their most important concern-namely raising their children. In 2010, the President's Council of Economic Advisors released a report on "Work-Life Balance and the Economics of Workplace Flexibility" inspired by this issue.

Yet today, parents are besieged on all sides when it comes to raising their children, from teaching morals while dealing with societal influences such as drugs and alcohol, to handling those work-life balance issues that plague all hard-working Americans.

In particular, pollsters note that moms have a tougher job than ever before, but that doesn't spare them from criticism when compared with the idealized moms of yesteryear. Some 70% of Americans see mothers as having a more difficult job, while 56% say that mothers are doing a worse job than moms 20 or 30 years ago, according to a comprehensive 2007 Pew Research Center analysis, Motherhood Today: Tougher Challenges, Less Success.

Dads in the breadwinner role of two-parent families are equally challenged. A 2011 study of 250 professional fathers by the family rights non-profit A Better Balance shows that 85 percent feel frequent stress from balancing work and family, some divide childcare on a 50/50 basis and 75 percent are concerned that their jobs prevent them from having as much time to parent as they would like.

So parents need all the help they can get considering the many demands endemic to our times---such as keeping kids in school and focused on learning. Or meeting the challenges necessary to keep kids healthy. A 2012 national poll on children's health concerns by the C.S. Mott Children's Hospital at the University of Michigan noted that the top 10 concerns for all parents, in order of importance, were not enough exercise, childhood obesity, smoking, drug abuse, bullying, stress, alcohol abuse, teen pregnancy, Internet safety and child abuse and neglect.

Bottom line, modern parents and their children are techno savvy, highly connected, over-scheduled, overwhelmed and continuously on the go. And as a result, parents are gatekeepers on a dizzying number of levels. So many that it begs the obvious observation that 'mom' and 'dad' are both the biggest title there are, and a huge responsibility. 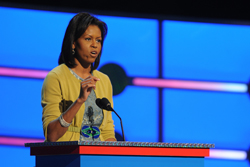 Their daily pressures demand simplification in the form of convenience, and the businesses that understand this have an advantage. The idealized mothers of the past benefited from some notable timesaving innovations, such as the washing machine, the dishwasher and the microwave. All three solved real problems and freed moms to do more. Today's moms--and dads--deserve nothing less.

Timesaving products and services are called for to help parents become unleashed in ways both big and small. Peapod grocery delivery and cozi.com, a cross-platform online app that helps moms organize the many tasks they face every day, are a good start.

In the grocery category, a plethora of products have also cropped up aimed at saving parents precious minutes while preserving nutrition, including healthy frozen entrees and complete pre-packaged lunches.

And dairies like Organic Valley, Lala, Herhsey's and Horizon have adopted one of Tetra Pak's contributions to nutritional convenience and timesaving for parents with their versions of shelf-safe milk. Long popular in Europe and Asia, American companies are now starting to use this packaging technology that protects one of the most wholesome and nutritionally dense beverages on the planet for up to a year without the need for preservatives or refrigeration. And in a nod to today's "on the go" lifestyle, most are producing single-serve portions that can go from the refrigerator to the diaper bag or lunch bag without worries they will spoil before they are consumed.

In the final days of the election, it's easy to forget that Americans unite around some very common themes. Michelle Obama and Ann Romney, given the positive media response to their speeches, hit at the heart of one of America's most important 'jobs,' namely raising children. Even businesses have a role here; their challenge and opportunities rest in the ability to invent relevant products and services that help parents manage and save time to fulfill this critical job.