The Arctic sea ice is the most famous visual indicator of climate change. This year the climate deniers took the lead to explain what's going on with the Arctic sea ice. "And now it's global COOLING! Record return of Arctic ice cap as it grows by 60 percent in a year," by David Rose in the Mail on Sunday, and "Global warming? No, actually we're cooling, claim scientists" by Hayley Dixon in the Telegraph -- both published on September 8 -- led the parade. Quoting all these irresponsible disinformation, on September 10, Greg Gutfeld of Fox News put an end to global warming with these words: "Global warming? Yes, it's finally dead."

Soon I'll get to the science of Arctic sea ice. But first a few words about "climate zombies."

Last year I participated as a panelist in The Anthropocene: Planet Earth in the Age of Humans symposium at the Smithsonian in Washington, D.C. I was on the panel "Energizing the Anthropocene: Science for Smart Decisions" with eminent climate scientist Dr. Richard Alley. Richard first gave a long view of global warming, and then provided a road map of how with a $1 trillion investment, the U.S. can move away from fossil fuels entirely. He is a great communicator of climate science, especially when it comes to debunking the deniers' bogus claims. I'll pull some quotes from a talk he gave earlier this year in June at an American Geophysical Union-Chapman conference "Communicating Climate Science: A Historic Look to the Future" at the Snow Mountain Ranch in Granby, Colorado. His remarkable solo act is a journey through his own life and explains in less than three minutes -- how climate zombies can survive on this earth, and keep reappearing. 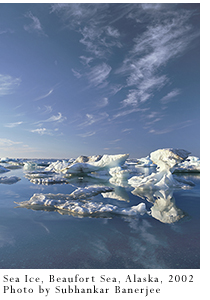 Richard Alley (June 2013): This particular climate zombie is back in force again. While warming continued, the "global warming stopped" had a new birth of noise.

Then he shows a map of global temperature data from 1957 to now, from the Goddard Institute of Space Studies.

RA: "Is it getting warmer? Yes. If you take a long enough interval, it's up."

He then explains how the climate zombies can keep saying -- global warming stopped, it's cooling.

RA: "We came here to show our daughters the mountains here [in Colorado] in 1997 -- at the start of a cooling trend."

When you look at the map you see that the temperature steadily went up from 1957 till now, but had many local minima that Richard Alley refers to as "start of a cooling trend." He then gives an astute career advice to aspiring climate zombies.

This time the Arctic sea ice reporting by the climate zombies was quickly debunked: "No, the World Isn't Cooling" by Phil Plait on Slate, "No, Arctic Sea Ice Has not Recovered, Scientists Say" by Andrew Freedman on Climate Central, and "With Climate Journalism Like This, Who Needs Fiction?" by Tom Yulsman on Discover Magazine are just a few examples.

"[Arctic sea ice extent] certainly is continuing the long-term decline," Julienne Stroeve, a scientist at the National Snow and Ice Data Center in Boulder was quoted in a Guardian article. "We are looking at long-term changes and there are going to be bumps and wiggles along the long-term declining trend, but all the climate models are showing that we are eventually going to lose all of that summer sea ice."

The enormous white surface of the Arctic sea ice reflects back solar radiation. But when the sea ice is replaced by dark water it does the reverse, absorbs solar radiation, which in turn contributes to the melting of the Greenland Ice Sheet (which would raise the sea level), thawing of permafrost on tundra (which would release methane trapped in soil), and destabilization of the subsea permafrost (which would release methane trapped in methane hydrates or clathrates). Methane as a greenhouse gas is 72 times more potent than carbon dioxide over a 20-year period. A complete loss of summer sea ice could potentially release huge amount of Arctic methane that might lead to a catastrophic climate change event, even possibly akin to the end-Permian extinction 252 million years ago that wiped out more than 90 percent of life on earth.

So our goal should be -- to not add salt to the injury.

Unfortunately, the Obama administration's National Strategy for the Arctic Region that was released in May is a disaster in the making. The document states: "The region holds sizable proved and potential oil and natural gas resources that will likely continue to provide valuable supplies to meet U.S. energy needs." It's referring to the oil and gas that sits underneath the Arctic seabed in the Beaufort and Chukchi seas of Alaska. In 2012, the Obama administration ignored science and all concerns of the indigenous Iñupiat communities, and gave Shell the approval to begin exploratory drilling (only top-hole drilling and not to penetrate the oil bearing zones) in the Beaufort and Chukchi seas. In February, Shell announced that after both its rigs, Noble Discoverer and Kulluk, suffered heavy damage last year and were cited for EPA violations, it would not drill in Alaska's Arctic waters in 2013. Shell's Arctic drilling operation is in limbo right now. "Six months after federal officials chastised Shell Oil for its faulty offshore drilling operations in the Arctic, the company has yet to explain what safeguards it has put in place or when it plans to resume exploring for oil in the vulnerable region," the Los Angeles Times reported on September 25. Shell has not yet applied to drill in Alaska's Arctic seas in 2014.

This is a good time to reflect on drilling in the Arctic Ocean as it relates to sea ice. Drilling in Arctic seas will result in gas flaring, which emits black carbon that absorbs solar radiation and will speed up melting of the Arctic sea ice. We need to connect a few dots about gas flaring.

Professor Rob Nixon wrote in Slow Violence and the Environmentalism of the Poor: Children, moreover, who had no access to electricity to read or learn by also had no experience of night, as they lived 24/7 beneath the blazing false sun of interminable flares, as if in some seasonless equatorial rendition of an Arctic summer. In the mid-'90s, when flaring [from Shell and Chevron pipes] from Nigeria's oil fields was pumping 12 million tons of methane and 35 million tons of carbon dioxide into the atmosphere annually, it was argued by some that this was the single greatest contributor worldwide to climate change.

Iñupiaq cultural activist Rosemary Ahtuangaruak wrote in her testimony in Arctic Voices: Resistance at the Tipping Point (that I edited) that in her community, Nuiqsut in Arctic Alaska, between 1986 and 1997 there was "a 600 percent increase in respiratory patients in a village of 400 people." As a community health aide, she was able to analyze the cause:

What was contributing to this increase in respiratory illnesses? The most overwhelming issue was that oil development around Nuiqsut had increased, and had gotten closer. The worst nights on call were nights when many natural gas flares occurred. Those flares release particles that traveled to us. Increased concentrations of particulate matter from flares occur during inversions, a bowl-like trap, with cold air trapped by warm air.

And skies are now ablaze over the Bakken oil fields in North Dakota. Citing a report published by Ceres, Lauren McCauley wrote on Common Dreams in July: "Bright torches of natural gas are to become an ever-more common sight along the horizon of North Dakota as the environmentally devastating practice of flaring, or burning off natural gas as a byproduct of oil production, continues to skyrocket."

Moreover, the Ceres report states, "a variety of other hazardous pollutants are generated by the process, including black carbon, another potent driver of climate change with adverse health effects." The report also explains why the natural gas is flared off: "At current market rates, oil is approximately 30 times more valuable than natural gas. As a result, producers have chosen to flare much of the gas they produce, rather than invest in the infrastructure necessary to collect, process and market it."

With all that, you can see, when Shell finally resumes drilling operation in the Arctic Ocean (let's make sure that never happens), there will be flaring, lot of flaring. If it doesn't make sense to invest "in the infrastructure necessary to collect, process and market" the natural gas in the benign environment of the Bakken oil fields, it will never make sense to invest in such infrastructure in the harsh environment in the middle of the Arctic Ocean. Shell will get their oil and flare off the gas -- and contribute to rapid disintegration of the Arctic sea ice -- perhaps taking us toward the end-Permian extinction, a bit sooner than we have to.

In a piece about the recent floods in Colorado I pointed out that not only do we need to connect dots across geographies, as I've done here with gas flaring, but we also need to carefully look at -- repeated assaults -- in a particular geography. As I wrote, in the last decade and a half Colorado (and its neighbor New Mexico) has gone through three major assaults -- massive tree deaths, massive wildfires, and now massive floods -- each in turn has been called "the worst natural disaster" the region has seen. Each in turn has also made the next one worse -- millions of dead trees made the wildfires worse, and we are now learning that the wildfires are making the floods worse. The human and nonhuman communities in the Arctic are suffering from repeated assaults -- climate change and pollution -- perhaps more than on any other region on earth. To understand this we need to take a long view of what sociologist Ramachandra Guha had called "struggles against environmental degradation" and "struggles for environmental renewal."

As I was writing this piece, news arrived -- drones are now flying above the Chukchi Sea in Arctic Alaska. In a future piece I'll write about the militarization of the Arctic.

Thursday morning I received an email from the Alaska Wilderness League: "So far, 500,000 of you have signed a petition asking President Obama to keep Big Oil from drilling in the Arctic Ocean. Today, 15 (costumed) polar bears and volunteers will deliver your 500,000 comments directly to the White House." Many more people -- from all across the political spectrum need to join this fight. The disintegration of the Arctic will lead to a devastated earth.

Subhankar Banerjee's latest book Arctic Voices: Resistance at the Tipping Point will be published in paperback on October 22.