We’re used to asking computers for facts, like the population of San Francisco, the GDP of Indonesia, or the square root of 5,929. But can a computer -- all hard drive and no heart -- really be expected to form an opinion on where to wine and dine a lover?

Absolutely, according to Menlo Park-based startup Desti, which has created a virtual travel agent that aspires to master human-like judgment and taste.

Desti’s iPad application, launched last fall under the same name, lets people ask questions as if they were posing them to another person, and it answers using artificial intelligence technology that can glean meaning from online reviews.

By figuring out how people describe their travel experiences, Desti has created an algorithm that’s learning to be an expert in the fuzzy matters of opinion, not just the stuff of fact. The app can address subjective questions that have subjective answers by consulting subjective sources.

Desti understands, "I'm looking for a romantic place in Napa to take my wife,” and then "read" a Condé Nast article or TripAdvisor review knowing that references to fireplaces and Jacuzzis suggest a dreamy hideaway. The text needn’t ever explicitly mention “romantic” for Desti to recognize a spot as such.

“We are humanizing computers to a certain degree,” said Desti chief executive and co-founder Nadav Gur. “We’re making them experts.”

The startup belongs to a growing roster of companies creating software able to process our written communication to infer things we haven’t expressed explicitly, such as tone or intent. These firms are forging a new frontier with algorithms that have an ear for human expression, allowing them to provide insights once beyond the scope of machines. Bing Liu, a computer science professor at the University of Illinois at Chicago, notes that his research team has been using so-called sentiment analysis to pinpoint social media users' political leanings through their updates.

Gur maintains Desti is unique in applying natural language processing -- the technology that helps computers decode the meaning of human speech or text -- both to understand questions asked and to deliver the correct responses.

The startup emerged from the same research institute, SRI International, as Siri. And like Apple’s virtual assistant, Desti allows people to phrase their questions naturally. But whereas Siri can only identify “fun,” “luxurious” or “outdoorsy” places if they’ve been tagged as such, Desti is taught to recognize what “luxurious” means and how to identify it from reviews posted online.

So how does a computer spot, say, a “fun” activity when it sees it?

Desti’s creators first had humans read through thousands of pieces of text, indicating which ones did and didn’t describe fun experiences. In a process known as supervised learning, the human readers provided a way of reasoning that the algorithm could emulate. Desti developers also fed the algorithm specific examples of “fun” pastimes.

Once trained to mimic humans’ analysis, Desti applies its pattern-recognition skills to comb through millions of reviews on thousands of sites, including Foursquare, Wikipedia and magazines. The app also knows to trust certain sources, such as Travel & Leisure, over others, like Yelp, where user-generated reviews could be fake or biased.

Ask Desti for fun things to do in San Francisco, and it returns a list including the Musee Mecanique, Beach Blanket Babylon and the Marrakech Magic Theater -- hardly the typical tourist fare. For each place, Desti lists contact and location information, along with bullet points outlining features, price recommendations and tips culled from other reviews. Much like Kayak or Priceline, Desti takes a commission on any itinerary a user books through the app. 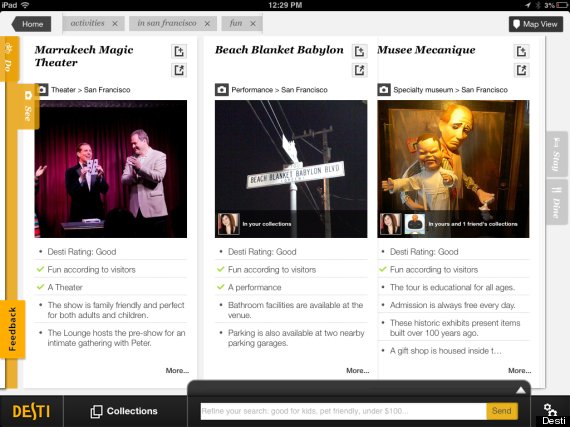 A selection of Desti's recommendations for fun things to do in San Francisco.

The company initially identified several hundred attributes Desti would use to organize its database of destinations, but has since added thousands more to the app’s brain. Gur says Desti tracks queries and adds new areas of expertise based on users’ requests. For example, the startup quickly realized, based on logs of questions being asked, that Desti needed to know what a “girls’ weekend” would entail. Still, certain queries stump Desti: It can’t quite figure out what “offbeat” activities there are in Portland (hint: a lot).

Given the huge variance in how people ask questions and describe their experiences, sentiment analysis and natural language processing become significantly more difficult the more categories an algorithm is forced to master. Liu, the UIC professor, notes that Desti is able to deliver on what it promises only by limiting its focus to travel.

“They’re using the fact that they’re working within a particular domain to get around some of the most difficult problems that natural language processing poses,” said Philip Resnik, director of the University of Maryland’s Computational Linguistics and Information Processing Laboratory. “Part of the reason that this is likely to work is because it’s working within a constrained setting.”

While Desti can help plan a vacation, it can’t yet assist with all your everyday needs, or even address all your travel queries. So far, the app, which has been in “beta” since November, can only offer advice on destinations in six states, including California, Hawaii and Washington. According to Gur, the startup will have the entire United States covered soon.

Though still limited by the attributes it can identify and which areas it knows well, Desti has earned a four-and-a-half star rating (out of five) on the App Store. Gur declined to specify how many times the app has been downloaded, but noted that it was one of the top 20 most-downloaded travel apps during the month of March.

Sheila Griffith, a blogger who runs the site Grandma Talks Tech, said Desti was initially confused by her request for a room for two with a Jacuzzi near downtown Las Vegas, but it got her meaning after she tweaked her question's wording.

“I was impressed,” she said. “It’s very intuitive, it’s very comprehensive and it gives all kinds of details.”

The technology that allows Desti to understand natural language questions and comments could be used to spawn a range of other virtual helpers, from personalized, on-demand shopping assistants to dating experts.

For example, instead of combing through Best Buy’s website for the perfect gadget or ticking off boxes to refine a search query, Desti’s technology could let shoppers make specific requests, like, “I’m looking for a DVD player to buy for my kids that’s under $200.”

From finding romantic restaurants, the app might even evolve to advising on romantic relationships. Desti’s progeny could one day interpret an email exchange between lovers, and help a miffed girlfriend determine whether her partner was intentionally rude, or merely rushed, Gur said. Unclouded by human emotion, an intelligent dating assistant could offer unbiased advice, or even recognize patterns in human behavior.

“We used to have a divide between things that people can do well and computers can do well,” said Melnik, the Desti developer. “I think more and more, we will see computers doing things we’re used to thinking people are only able to do.”