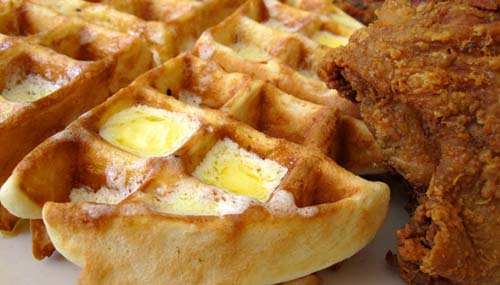 Rumor has it that chicken and waffles first gained popularity in 1930s Harlem, when the after-hours' crowd was looking for something to eat that satisfied both their dinner and breakfast cravings.

Whatever the truth, the southern comfort combo is exploding all over San Francisco, and when you're in town, you've got to try it. City insider Antonio Barrios, Chief Concierge of the St. Regis San Francisco, shares his picks for the top three chicken and waffle joints:

Little Skillet
Some of the city's best soul food is served through this tiny walk-up window on an industrial alley in SoMa. Open Monday through Saturday for just breakfast and lunch, Little Skillet's chicken and waffles have gained a cult following throughout the Bay area. For sweet company to your waffles, you can choose from maple syrup, thick melted butterscotch, strawberry rhubarb and more. But be warned: if you want to find room on the bench to eat (or on the loading dock across the alley), get there early before all the local office workers start lining up.

Hard Knox Cafe
This is one of my favorite soul food standbys, located in Dogpatch (though there's also a bigger outpost in the Richmond). It's run by a Vietnamese couple who got their soul food chops while living in Louisiana. The fried chicken is never dry, and is sealed in a light peppery batter alongside buttermilk Belgian waffles.

Read Antonio's blog for more insider San Francisco tips on GloboMaestro.com, where top hotel concierges dish the inside scoop on their cities in quick videos and personal blogs.