To find someone with the same first and last name as you doesn't sound like too hard of a task. But when your last name is "Kuegler," this ups the ante significantly.

I saw a fellow Tom Kuegler, or "TK" as he likes to be called, across the way while doing a Google search. To my astonishment, his LinkedIn profile was number one in the results, while mine dangled just beneath.

I started to ask myself, "Who is this guy?"

I clicked on his name and something incredible happened. I saw that he was from Baltimore--my hometown. In fact, he ran for the state legislator there a year after I was born in 1994.

It turns out he went to Loyola University Maryland, right down the street from me, and that he is the CEO of a very successful venture capital firm called Wasabi Ventures. Pictured below, TK has funded 200 startups since 2003 and among them was a company called Ustream, which was acquired by IBM in early 2016. 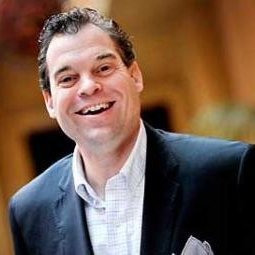 For a man as successful as he was, I thought reaching out to him might be feeble--but I emailed him anyway. I immediately got an auto-responder that said something like "I get 3,000 emails per day, I'm trying to get away from it as much as possible, but feel more than welcome to reach out to me on Twitter."

An hour later I got his response, and he was more than happy to sit down for an interview with a young 23-year-old kid like me. After all, I do have his name.

Leading up to it was terrifying. What if I don't ask any good questions? What if I waste his time? If he gets 3,000 emails per day, he must be pressed for time.

I dug my head into the internet and researched everything I could. I was on LinkedIn, YouTube, and I took a glance at a few of his other interviews he had given.

I was pleasantly surprised at the man I saw reflected in these digital words, but what would talking to him actually be like?

Suddenly it was one minute before two o'clock, our scheduled time. All the thoughts culminated in my mind as I typed in his number with shaky fingers. There they were, staring back at me, and my thumb finally made its final descent toward the green button to make the call.

All of a sudden the room went silent and all I could hear was the ringing of the phone. I was about to meet myself. A few rings later, he answered.

He had a warm voice--an enthusiastic one--the kind that you know is just as happy to talk to you as you are with him.

I introduced myself, and how I got to write at Huffington, and how my Mom actually told me about him three years prior.

He goes by "TK," which is something I actually went by in elementary school as well. He explained, saying, "Fifteen years ago I bought a smaller company out in San Francisco, and three of the people in the company were named Tom."

"So the CEO of the company said he couldn't call me Tom, and from then on I would be called TK."

It was now that our conversation would take a majorly unexpected turn. He chimed in, "Now are you related to the Thomas Kuegler--the wrestler?"

These words shocked me. He knew who I was too? What kind of sorcery was this that a big name businessman knew who I was? It's true that I wrestled in Maryland and won a state dual championship with my team. I had done well for myself while it lasted, yes.

"You are the only Tom Kuegler I have ever been confused with," he continued.

"Because of your wrestling accolades, I followed you very closely from afar. To flip this around it's kind of an interesting honor for me to chat with you."

Here I was thinking the honor was all mine. What a twist to this story. 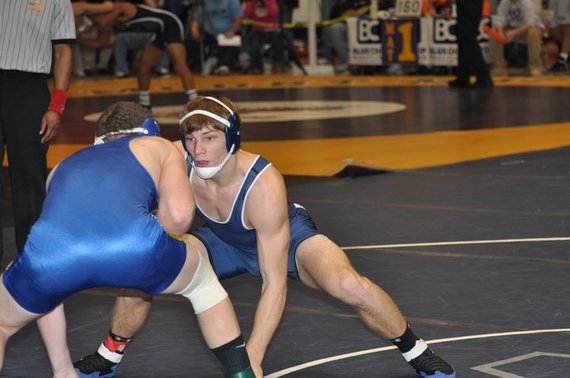 Pictured above is me wrestling during my senior year of high school.

On that same note I had to ask him whether he was German, as Kuegler is about as German of a last name as you can get. He said yes, and that we must be related somehow or another.

It was here that I really sunk into the conversation. We were talking with each other like old friends. In fact, it felt like we had so much in common that it was hard for me to pick what I wanted to talk about next.

I found that he was an All-American lacrosse player and that he coached Campbell High School to a state title as the Offensive Coordinator. Lacrosse is big in Maryland, and so is our Baltimore Orioles, so I asked him about that. Here's how our conversation went.

Q: Are you an Orioles fan? If so, who was your favorite player back in the day?

A: Oh yeah. I'm a Baltimore sports fan. I haven't lived in Maryland for 20 years, but I'm a Ravens fan, I'm an Orioles fan, I'm a Baltimore kid. As a young kid I was a huge Al Bumbry fan. When I was in middle school he played center field. And then I also liked Cal Ripken when he came in. It's tough to not be a Cal Ripken fan.

We then geeked out on how much we both liked Manny Machado. For everyone not from Baltimore, just keep moving along.

Q: You ran for the state legislator in 1994, what made you want to get into politics?

A: I gave my commencement speech in high school, and a politician by the name of Mike Davis came up to me and told me that I gave a great speech and that I should run for office. I'm just an 18-year-old kid from high school at the time. He ran for office two years later, and so I saw his lawn sign and thought I'd call him up to stuff envelopes to help in any way I could. I was just trying to be helpful to somebody who was nice to me. I did get to help him out, and it set me on a path for about four years where I was super active in politics. I got involved in all kinds of campaigns. And then the next logical progression was for me to run for myself. I ran and I lost. I thought I'd get involved in politics because I would get to meet fun, smart people. I fell in love with the idea of what politics should be, and what I found was anything but that.

Q: Are you happy with how your life has turned out now?

Q: I saw you met with Martin O'Malley on YouTube, how was that?

Q: What's the difference that you see between my generation and the generation you grew up in back in 1994?

A: I think, and I grew up in Essex, which is low to middle income. I come from a completely blue-collar family. So kids I grew up with are still living in the same place that they lived when I grew up. They haven't left. The biggest difference I see in this generation is that kids of this generation dream bigger, much much bigger, than my generation. My generation tended to dream small, because the world was small.

Your generation dreams huge, but doesn't necessarily understand the work that has to happen that goes into it to making the dream come true. Nobody in my generation would've thought to take the trip you just took. I know tons of people of your generation who do trips like that. The world is insanely flat now. It's because you can instantly go online and grab any piece of information you need, on any topic. 20 years ago that wasn't possible. And now everyone can do it.

Q: I was reading your weekly posts on LinkedIn, and you wrote, "Like many great gifts, the giver doesn't even know the value they are offering to the recipient." What's one of the best gifts you ever received?

A: You'll appreciate this. I had a guy come up to me and he said, "You don't know who I am, but I was in the audience one time when you were giving a speech, and I didn't want to come up to you after because there was a whole bunch of people around, but I took one thing that you said out of that and I completely changed my entire life." He thought that I was giving him a gift, but in all actuality when he told me he changed his life because of something I said, he was giving me a gift. The greatest gifts are almost all these things that you never, ever knew you got. You don't always know the impacts that you're having.

Q: I'm 23, about the same age as you in 1994 when you ran for state legislator, if there's one thing you could tell your younger self, what would it be?

A: Take more chances. If I could tell my younger self anything it would be to not be scared or show any trepidation towards anything. Take more chances. When you think you should take the safe route, take the other route. When you're older you don't ever want to look back and say I wish I could've done this. Just go do it.

Q: You talk a lot about pitches because you listen to them every day being the head of a Venture Capital firm. What's the best pitch you've ever given?

A: I would say that the best pitch I ever gave was convincing my wife that she should marry me. I think making that convincing argument was a key thing.

It was then that my questions had run out, but our conversation had been going on for an hour, so it was only fitting that I let myself(him) get on with the rest of my(his) day.

I came away from this experience overjoyed. I suppose this story isn't just about coincidence or the weirdness of fate, it's about how we're all connected. It's about how our names aren't the only thing that make us similar.

I felt like I was reaching through time to talk to an older version of myself--even though I'm sure I won't accomplish even a quarter of what he has by the time I'm that age. His words shocked me. They were so visceral and direct that my life seemed to swell with purpose when I got off the phone with him.

I told him I'd love to meet him one day. He told me his door was always open and that he would be in Baltimore at least one week out of every month.

It really is a unique place, and I know it's where at least two Tom Kuegler's call home.

You can follow Tom further on his travel blog and see what he's up to on his Facebook page.