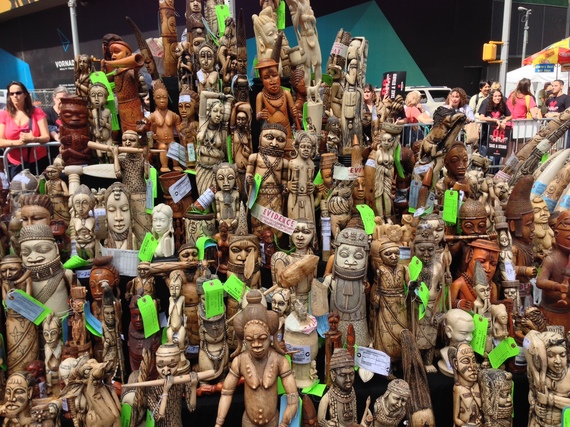 Our planet is facing unprecedented mass extinctions of species. And we humans are the culprits. A just released study (June 19, 2015) reveals that "477 vertebrates have gone extinct since 1900, rather than the nine that would be expected at natural rates." And the loss of vertebrates "was far higher than in the last five mass extinctions." The current accelerated rate of extinctions is so great that the authors of the study concluded that we are entering the sixth mass extinction.

It's apt that this grim report was released on the day of the Times Square "ivory crush," a media event to publicize the tragedy of the vanishing elephant population in Africa and Asia. Elephants could be extinct as early as 2025 warns Kenya's Dr. Dame Daphne Sheldrick of the David Sheldrick Wildlife Trust, if the present rate of poaching for the ivory trade continues. Over the past decade 75 percent of African forest elephants have been slaughtered.

At the Times Square ivory crush speeches by officials of the Department of the Interior, The Fish and Wildlife Service, Customs and Border Protection, Wildlife Conservation Society and several local politicians decried the sad statistics on the rate of elephant kills. All declared their determination to end the poaching of elephants for their marketable ivory tusks. Their war cry has become a mantra to mobilize public and government attention and international action: "In crushing the ivory we are crushing the ivory market." Then to prove that this dramatic event was an attention grabber and crowd pleaser, an enthusiastic cheer went up as the one-ton collection of seized ivory objects was loaded onto a conveyor belt that fed the ivory into a gravel crushing machine. As the pulverized ivory appeared on the exit conveyor belt the cheers and applause escalated to a crescendo.

Caught up in the enthusiasm, I cheered as well. At the same time I could not deny the gnawing feeling that there was something disturbing about this event. I could not shake the thought that destruction to stop destruction is arguable. 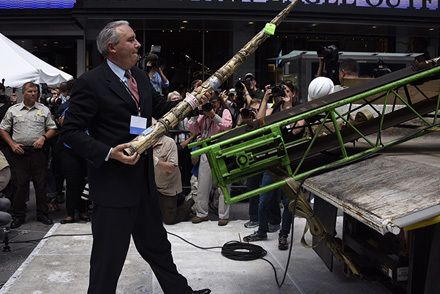 Conveyor to the Crush Machine by WCS

But I decided that if the ivory crush would indeed deliver a fatal blow to the ivory trade, or even a significant disruption, then destroying these confiscated objects would be a worthwhile sacrifice.

However, when I examined the effect of earlier crushes, I wondered.

On November 14, 2013, the U.S. Fish and Wildlife Service crushed six tons of elephant ivory stored at its facility in Denver Colorado. During that year The Wildlife Conservation Society announced that 35,000 elephants were killed, a rate of 96 every day. Ironically, at the Times Square crush on June 19, 2015 a poster reported the same number still being killed each day. 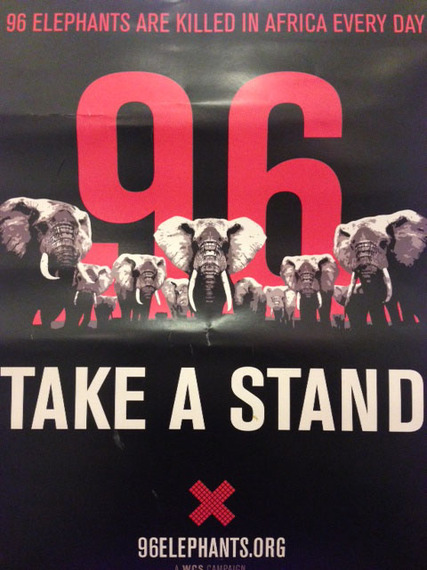 The U.S. ivory crushes are not the only ones. Six tons of seized ivory was crushed in China on January 6, 2014. Hong Kong began pulverizing twenty-eight tons of ivory figurines, tusks, and other objects, also in 2014. And other crushes of ivory were carried out over the last 24 months in Belgium, Chad, SAR, Czech Republic, Gabon, France and the Philippines, according to the National Geographic. In fact, since 1989 thirteen countries have destroyed 150 tons (three hundred thousand pounds) of ivory. Yet, the high kill rate of elephants continues, as we march ever closer to elephant extinction.

Poachers and unscrupulous marketers and buyers of ivory apparently have not been thwarted by the destruction of ivory, as evidenced by the continuing robust market for ivory after the massive crushes. And why would they be? From the perspective of the buyer, the objects are gone, never to be returned. Why would consumers care if their seized objects, some fine art works, were destroyed, warehoused, or the better pieces given to museums with the proviso that they could never be sold or traded. More importantly, none of those outcomes would likely slow the marketing of ivory.

Is it possible that the crushes might even be counterproductive? The difficulty of arousing public attention to environmental issues in these stressful financial times is well known. One survey reported that "public concern for environmental issues "has reached a twenty year low." In that context, bold pronouncements that a crush will crush the ivory trade could promote even greater complacency: "Well, they solved that one--I don't have to be concerned anymore." And the destruction of ivory without stiff enforced sanctions to stop the trade could raise the value of ivory and thus increase the elephant kill rate, as suggested in a 2013 article in Slate: "By destroying the ivory, you create even more ivory scarcity and increase the incentives for future poaching."

Unfortunately, If there is a buck to be made, no matter what the cost to civilization, there is no shortage of people who will do it. Terrorists, a major source behind the ivory trade (tusks for guns), will not stop poaching regardless of threats, as long as there is a market. The same goes for middle men, except they could be stopped or curtailed if strong sanctions were enforced. Another source of poaching poses a more formidable conundrum. Sanctions will not deter desperate poor people who will continue to poach to stave off hunger and starvation for themselves and their families---yes, poaching is also a poverty issue that governments must address. It also doesn't help the cause of protecting endangered species when an African leader like President Robert Mugabe of Zimbabwe celebrates his birthday by serving elephant meat to his guests.

But the most vulnerable to both moral arguments and certainly sanctions, are the ivory buyers. That's where the buck must stop. With no market, meaning no money, the middle men and terrorists, or any others who are poaching for cash, would have to seek greener pastures.

Consider also, that the bulk of consumers who are sustaining the market for ivory, in contrast to their perverse thirst to possess ivory trinkets for whatever reasons, are otherwise ordinary citizens. Sanctions for these buyers, such as having their names publicly exposed, as well as steep fines, and even token prison terms might work. Whether a sentence was for a day, a month, or years, how many would be willing to risk reputation, employment, or a prison record for trinkets?

Governments are increasingly embracing this approach. In 2012 a Philadelphia dealer in African art was sentenced to 30 months in prison and fined $150,000 for smuggling in more than a ton of African ivory. In a get-tough initiative in 2013 China handed out 3-15 year prison sentences to at least twenty individuals involved in the illegal ivory market. And in 2014 a Chinese antiques dealer was given a seventy month prison sentence for smuggling rhinoceros horn and elephant ivory artifacts into China from the U.S. In its boldest action China sentenced 37 ivory smugglers to life terms.

Back in the U.S., new federal rules, more restrictive than the 1989 prohibitions, went into effect in June 2014. According to the New York Times, these new rules " ban Americans from importing and, with narrow exceptions, exporting any item that contains even a sliver of ivory. The rules do not ban private ownership, but they outlaw interstate sales of ivory items, unless they meet what sellers describe as impossible criteria." Items like a century-old Steinway piano with ivory keys will be blocked from interstate sales "unless the owner could prove the ivory in the keys had entered the country through one of 13 American ports authorized to sanction ivory goods."

Even tougher standards have been put on the books in several states. A New York State bill signed by Governor Andrew Cuomo on World Elephant day, August 12, 2014, bans the sale of ivory with few exceptions. Stringent proof will be required for allowing the sale of ivory that is one hundred years old or older. According to one commentary, this is "a difficult standard that excludes almost all ivory objects, including antique American objects from sale." Since the United States -- and New York in particular -- is the second largest market for ivory after China the new legislation, which also strengthens civil and criminal penalties, is a significant direct assault on the ivory market. Connecticut lawmakers are currently considering a bill to ban the import, sale, and purchase of ivory or rhinoceros horns -- and would make the crime a class B misdemeanor calling for up to six months in prison, a fine, or both.

These actions are encouraging. Hopefully, similar statutes will spread to all the states backed by diligent enforcement that will turn the tide.

I must admit that I had reservations about publishing this article -- and not because of doubts about the expressed position. The men and women who have backed ivory crushes are passionate tireless workers in the front lines fighting selflessly to protect elephants, other species, and insure sustainable life on our planet. Their efforts should be respected and honored.

Nevertheless, I concluded that this critical moment, in the race to stem elephant extinction, demands the concentration of time, energy, and resources on actions that are most likely to achieve positive results. Toward that end an open public debate is warranted.

Bernard Starr is a psychologist, journalist, and professor emeritus at the City University of New York, Brooklyn College. He is also the Main United Nations representative for the Institute of Global Education (IGE) that founded Radio for Peace International and the Mucherla Global School in Mucherla India. IGE is an NGO with consultative status with the Economic and Social Council of the United Nations (ECOSOC).