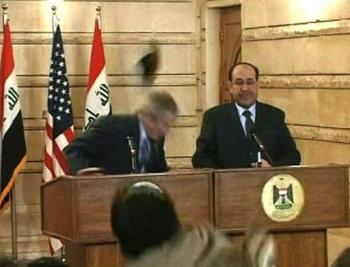 Reagan forgot to duck. Bush didn't. It's unforgettable television that, upon reflection, appears to sum up the man and his presidency.

Watch the video. From behind we see the Shoe Thrower lurch up, ragged and uncouth, doing his best to reinforce all negative stereotypes of angry Muslim fundamentalists. He yells, "This is a goodbye kiss from the Iraqi people, dog!" and unleashes the shoe, hard, straight at Bush's head. The shoe moves fast, with good rotation, perfect for a bloody nose. And, without batting an eye, Bush ducks a foot and a half. What was about to nail him on the schnoz sails harmlessly into the backdrop.

Then, wait. This is the strange part. There's no mass tackling of the Shoe Thrower, no Secret Service agents diving across the stage to take a Nike for America. For a beat the Shoe Thrower owns the room. And--my favorite part--Bush does NOT hit the deck. Instead he pops back up to normal height. His face is cagey and attentive, on full alert like a basketball defender. He's little bewildered, but not paralyzed. Instinct consumes him. It looks as if he realizes this is incredible, amazing stuff, a must-see event, history unraveling before him. Maybe some Texas bravado wriggles in. Maybe he feels assassination coming and is determined to watch it in. He has to see how this ends.

In this situation, Bush loses no dignity by crumbling to the floor in the fetal position. We expect this of our presidents--it's the rational thing to do. It's what I would do, and what I hope my friends and family would do. But Bush stands there, a sitting duck, waiting, just as intrigued as we are. He does not take over. He is not in control. Like his presidency, Bush's staredown looks foolhardy and counterproductive, but here a corner of my gut roots for him hard. Bring em on, indeed.

The other shoe drops. Good rotation, and thrown hard, but it sails on him. Bush flinches, raises his hand, but it's not a full duck. He's seen major league pitching. This guy doesn't have it. Finally, the other reporters in the room awaken and move to collar the Shoe Thrower. A little while later, Bush adds the mandatory quip: "All I can report is a size 10."

It's a strange capstone to a presidency, one of those semi-absurd semi-scary incidents like the pretzel-choking, the back-shooting, the bike-crashing. Yet somehow those ten seconds seem to say everything about the man, about guts and intelligence, humor and luck, the dangerous world Bush has helped make worse. For what the world hopes to be the last time, we've watched the man do just enough to keep himself afloat.