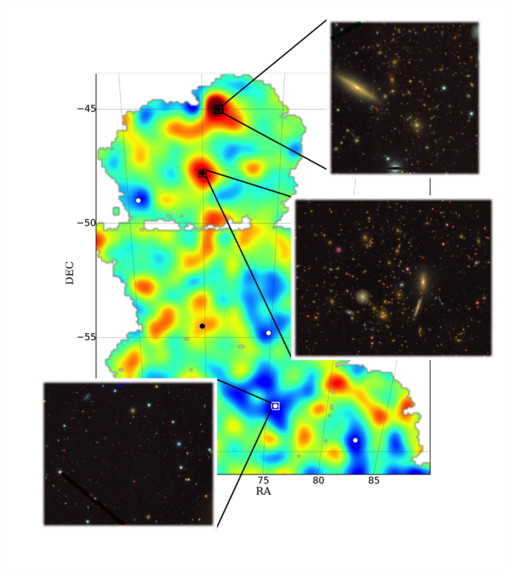 Measurement of mass distribution surrounding two clusters of galaxies and a void.

Scientists from the Dark Energy Survey (DES) collaboration announced a new and precise map of the distribution of dark matter at the annual meeting of the American Physical Society. Using a very sophisticated camera containing 570 million pixels, scientists imaged distant galaxies, looking for tiny distortions in the galaxies' shapes. This distortion is caused by a phenomenon called gravitational lensing.

Dark matter is a hypothesized form of matter that is five times more common than the ordinary matter of atoms. It has been invoked to solve mysteries of why galaxies rotate more quickly than expected and why clusters of galaxies are held together.

The technique used by the DES collaboration is analogous to looking at distance galaxies through a lens. By studying the small distortions, one could work out the nature of the lens. In this instance, the lens isn't glass, but rather the intervening mass.

The recently announced result uses only 3.3 percent of the sky being surveyed by the DES telescope and a small amount of the data. DES will take data over a five year period and, with more data, they will be able to vastly expand their study, both across the sky and in terms of possibly segmenting their study in terms of the distance from Earth.

In this way, it will eventually be possible to make a three dimensional map of the dark matter distribution of the universe. The measurement thus far is a strong confirmation of the theory of dark matter and scientists are very interested in seeing if the more precise measurements in the future will tell a similar tale.

For more details, the technical paper is available here.