From GroundReport.com, a global citizen news platform of 4,000 international reporters.

Palestinian journalist and media activist Laila el Haddad was detained nearly 24 hours ago at Cairo International Airport en route to her native Gaza. Mrs. Haddad, a US resident, is traveling with her two young children and currently still in custody.

Using Twitter and the Cairo Airport's free wireless internet, Mrs. Haddad has made her experience public. Posting regular status updates, asking for help with government connections, and reaching out to her swelling 'follower' ranks, the blogger known as @Gazamom is reporting in real time.

She is also documenting her journey, stating in a tweet that "i'm recording my ordeal and journey with my flip mino." Mrs. Haddad is seasoned in social media, and maintains a blog called Raising Yousuf and Noor: diary of a Palestinian mother. In her blog description she writes, "My husband is a Palestinian refugee denied his right of return to Palestine, and thus OUR right to family life. Together, we endure a lot, and the personal becomes political."

In her last updates, Mrs. Haddad said she was considering going on a hunger strike, and that she may be deported to the United States this evening. 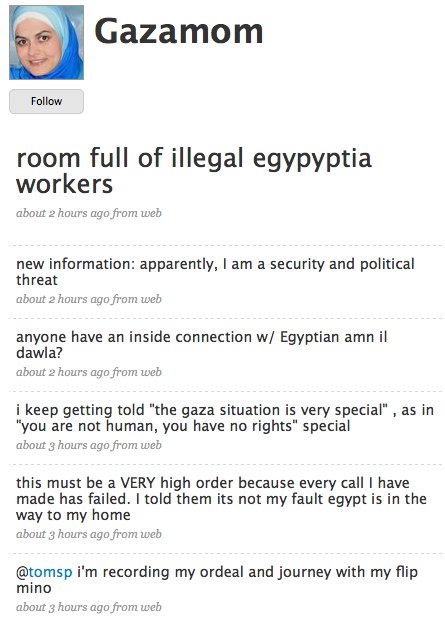 Go to GroundReport.com for more on-the-ground, breaking news and opinion on Egypt. GroundReport is a citizen media platform that allows anyone to publish global news and earn money.