At St. John of God Hospital in Lunsar, Sierra Leone, there is a large courtyard filled with trees. I was sitting in this beautiful spot with Margaret Bangura while she recalled her joy at becoming a newly qualified midwife in the spring of last year.

A mother of five, Margaret has lived in the town of Lunsar all her life. She and her husband scrimped and saved to pay for her training. Her graduation day was one of the proudest moments in her life, matched only by the day when she started work at the hospital. 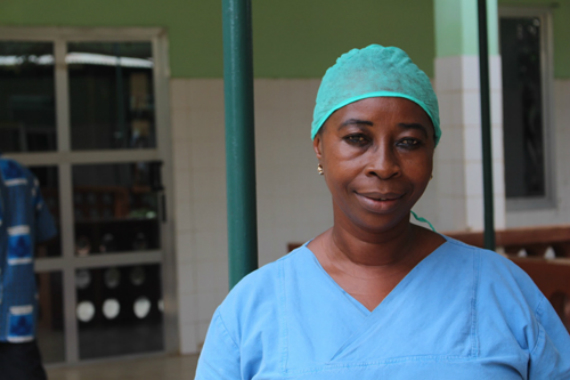 At that time, St. John of God's or Massebeneh, as the locals call it, was the main source of health care for a population of nearly fifty thousand people and was well known locally as a place where women, some as young as 15, would come to give birth safely.

The people here are poor, subsisting on farming rice and the local staple, cassava. The rates of infant and maternal mortality are high, making the services provided by Massebeneh vital.

Margaret smiled as she told me about the early weeks in the job. This happiness was to be short-lived. Within weeks of her starting, rumors about a strange new disease killing people in the rural villages began to circulate.

By July, Margaret and her friends knew its name -- Ebola.

Margaret felt the stress amongst her colleagues rising as the virus started to spread across Sierra Leone. But she told me that they had to carry on their work. Every day pregnant women were still coming to Massebeneh in need of their help.

Then, one of Margaret's friends, a surgical nurse, died. Fear of the disease began to spread through the staff and the community. She remembers that the number of women attending the clinic dramatically dropped off. The patients that still trickled into the hospital did so out of desperation.

I asked her about how she felt about this turn of events, as a mother herself with children at home. She shrugged and told me that she did everything she could to keep her family safe, but this was a job she had dreamed of all her life and she couldn't abandon her patients.

Throughout July and August of 2014, Ebola tore through Lunsar. Within only a few weeks, eight members of the staff at Massebeneh died, including the hospital's chief surgeon, Dr. Manuel García Viejo. The hospital was closed on September 24.

Margaret still grieves for those friends she lost, but she also speaks empathetically about the women in the community who had nowhere to go. With no medical intervention she knows hundreds must have died, not of Ebola, but of other complications common in rural village communities.

First, International Medical Corps designed and built a triage facility, called a screening and referral unit (SRU), which would screen every person entering the hospital for signs of Ebola, and then would refer any patient with potential symptoms to the ETC.

Then, Margaret and her teammates were trained in the use of Personal Protective Equipment (PPE) at the ETC's training center. She laughs when she recalls the initial reaction of the villagers to her appearance in the PPE "spacesuits."

By January, both International Medical Corps and the hospital management were happy that the SRU would keep Massenebeh safe from Ebola, and finally reopened on January 10 to outpatients.

By March, the inpatient ward also opened. Margaret says that now the hospital is almost back to pre-Ebola levels and the SRU has screened more than 7,000 people. Most importantly, she thinks that the fear people have of coming into the hospital is subsiding, in large part due to the SRU.

Margaret says training staff in Ebola protection and management -- more than six hundred healthcare workers have been trained through courses at the Lunsar ETC -- and providing the backup and support they need is key.

But none of this would work without the bravery and dedication of women like Margaret.

As we said goodbye she smiled again. She has begun to believe that things are getting better, but knows we must remain vigilant to prevent such an outbreak from occurring again.

This post is part of a series produced by The Huffington Post and the NGO alliance InterAction around World Humanitarian Day, August 19. This series highlights the inspiring and heroic stories behind the Ebola crisis response in West Africa. Click here for more posts from the series, follow along on Twitter with #WHD2015 and #ShareHumanity.