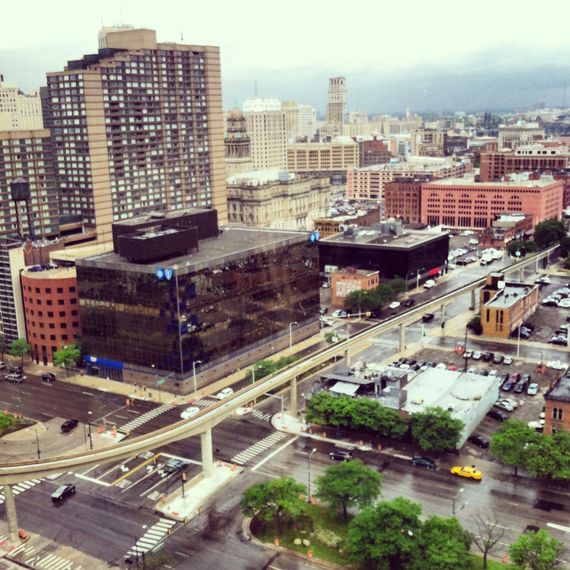 This week, 24,000 Detroit properties that owe taxes to the city will begin the process of being auctioned off to the highest bidder. The annual event takes on a greater meaning this year as it is running concurrently with Detroit's bankruptcy trial which also began this week. The auction is the personal version of the city's financial troubles, showing on-the-ground evidence of the individual struggles which resulting in people's inability to pay for their property. Looking at the map of foreclosed parcels gives a powerful image of economic disparity -- the concentration of foreclosures in neighborhoods like Warrendale is shockingly high, while Corktown boasts a whopping total of Zero. Interested buyers have the chance to purchase a piece of Detroit for what are often very reasonable prices.

The auction is based on property parcels, which may include homes, apartment complexes, commercial buildings and even empty lots in various states of care or disrepair. Most of these properties have buildings on them, and many of those buildings are homes to the current owners, renters, and in some cases, squatters.

The annual foreclosure auction is a powerful force of change for a number of reasons. It offers a burst of revenue for a city that sorely needs it. It encompasses the dream of home ownership for many who could not otherwise afford it. It draws the attention of outside investors with an optimistic view of Detroit. And it also represents a devastating blow to those who face displacement when the place they own or rent is no longer theirs to call home. 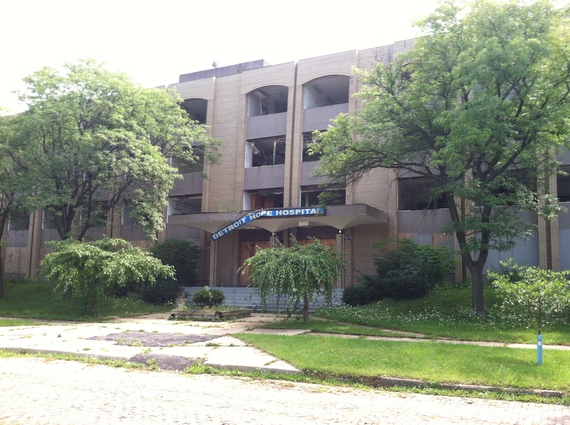 How It Works
Round 1 of the auction runs from today, September 4, through Wednesday, September 24. During this period, bidding prices start at whatever amount is owed in property taxes. Any properties that are unsold after this round will go up for auction again in Round 2 which begins in mid-October, where bidding will start at only $500. The bidding for an individual parcel happens over a 2-week period, so properties released for auction today will not fully close until September 17th.

Timing for the bidding is based on batches -- groups of 125 properties grouped together by Zip Code. Each batch is released for bidding at staggered 15-minute intervals throughout a week-long period. Some of the most coveted neighborhoods are up for bidding first, including Brush Park, which has drawn a lot of real-estate attention with the announcement of the expanded "sports district" in the area.

Most of the bidding will take place at the end of the two-week period, when the feeding frenzy of last-minute wagers come in. A similar process happened in the final hours before the auction itself, as current owners scrambled to sell or pay off properties before they were foreclosed.

The Numbers
The numbers here are absolutely daunting and the reality of what they represent is even more so. After this auction, the Detroit Land Bank Authority will own approximately 100,000 properties. Many of those are too undesirable (think fire-charred blighted homes, dumping sites, entire empty blocks) to even be included in this auction. The properties that are included make up the sub-set of more viable properties (a relative term) that the city has a chance to recoup some money on, and to have taken off their hands. 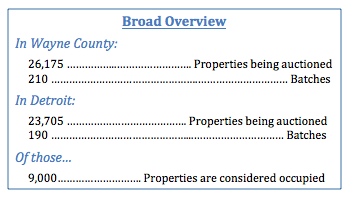 Your Role
If you even think you might be interested in participating, register with the Wayne County Treasurer, there is no cost to register, just to bid. Research the property in advance before you purchase, hidden fees, renovation costs and complications with potential existing residents justifiably make these properties more expensive than their initial price tag. And if you do buy, congratulations, good luck!

Resources
Information, Registration, and Bidding: Wayne County Treasurer
Detailed assessment on each property Why Don't We Own This?

View original article and other writing by Michele Oberholtzer at www.oberdoit.com