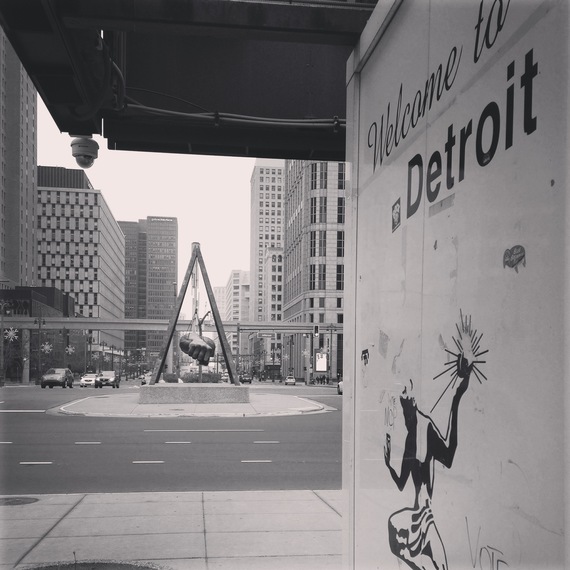 I hear it all the time -- whether it's through conversations with Detroit-born family and friends or in articles that tell its story. I see it, too, within the graffiti that lines the walls of once-prominent buildings, which have since been abandoned. It's even a foundation of the décor of the city's new businesses, tucked within the quotes of large-scale art pieces geared to inspire those who visit and those who still live there.

Before I visited the city last month, I didn't necessarily believe it. I thought maybe someday -- but not anytime soon. I can say that because, well, I was born in Detroit. The majority of my extended family still lives in the city's sprawling suburbs -- a vastly different world than the one you see in the pictures depicting the city's fall from grace. I moved out of the state nearly four years ago, so when I visited recently, I came at Detroit with a fresh set of eyes. What I saw surprised me -- a city that's already on the rise. These are the five main reasons in my eyes.

It's still early yet, but Hockeytown's beloved Red Wings are also strongly in the playoff hunt. Detroit recently broke ground for the Wings' new hockey arena downtown, too.

Its art scene. Recently, Brooklyn-based Galapagos Art Space announced it's moving out of New York due to high rent prices to the more affordable Detroit area. I'm sure you've heard, too, about how young artists are moving to Detroit in favor of its cheap rent. When my girlfriend and I visited recently, a passerby stopped us to point out a piece of local art up for grabs downtown -- at no cost. This discovery was a part of Detroit's Free Art Fridays, a free art scavenger hunt designed to promote creativity, celebrate art and explore the city. Also, when wandering around within the city limits, you can't miss graffiti, which radiates Motor City pride, lining the walls of Detroit's impressive architecture.

Its inexpensive real estate. In 2014, Detroit auctioned off beautiful old homes for as low as $1,000. Yes, you read that correctly. While there are catches to these drastically low prices, it's not uncommon to see historic homes going for prices that just might make you want to quit your job, move to the Motor City and buy the whole dang neighborhood.

Its city pride. People who live in Detroit love Detroit. The others, like me, who have moved out of the area, take great pride in supporting their hometown. Detroit backs their own, too. Just try turning on a local radio station when cruising through the city. You will be greeted by the likes of Eminem, Big Sean or some other artist with Detroit ties.

Buying products made in Detroit, such as Shinola or a Chrysler, has become a way for locals to support their city, perhaps the boost Detroit needed to help exit bankruptcy. Shops with Detroit roots, like Shinola, which sells American-made watches, bikes and more, have become trendy elsewhere, too. During my visit, I bit the bullet and bought a Shinola watch and since have heard from others who have a Shinola watch or are interested in one -- outside of Detroit. #MadeInDetroit has 22,000 posts on Instagram, too.

Its craft beer. Venture around Midtown in Detroit and it's hard to miss all of the local breweries popping up -- igniting its craft beer scene. For example, when we were driving around, we saw HopCat, a craft brewery with Michigan ties, recently opened its doors to Detroit. New spaces, like HopCat, give Detroit something it's been missing -- a nightlife to help attract young professionals.

There are many more reasons as to why Detroit is poised for a comeback, but these are the main points I took away from my experience there. It's impossible to forecast the future, but one thing is for sure: Detroit's headed in the right direction.