They meet up the last Friday of every month on the corner of Trumbull and Warren in Detroit -- mostly cyclists, but sometimes skateboarders, rollerbladers and others. They come from all over Southeast Michigan to take part in a unique event, a ride called Critical Mass.

Cyclists swarm the streets, filling lanes and for a short time making motorists rethink their notions about traffic on the public roadways.

Critical Mass rides started in San Francisco in 1992 as a way for cyclists to increase their visibility on the road. The biking get-together has spread to hundreds of cities around the world. It's a decentralized movement, and some in its ranks use the ride as a way to critique modern society's over-dependence on motor vehicles. To others, though, it's just chance to go on a fun bike ride.

"Critical mass is just basically a way to contrive a lot of people to go biking together, to mass up and collectively make the public aware that there are bikers out here," said Derek Savage, 27, a Wayne State University student and office manager who's been participating in the Detroit event for about a year and a half.

Savage said Detroit's Critical Mass cyclists respect the rules of the road. Special riders called "corkers" block traffic at certain intersections to ensure bikers' safety. According to Savage, the local smaller rides tend to be free-form, while larger events have leaders who plan routes out ahead of time.

Dywayne Neeley of the East Side Riders bike club enjoys Critical Mass, but takes a less orderly view of the ride than Savage.

"It's chaos. Instead of riding in unison -- like for instance taking one lane -- they're all over the place," he said, adding that the commotion can infuriate some drivers.

Neeley said members of his club usually stick to one lane and communicate with signals when they take the whole street. 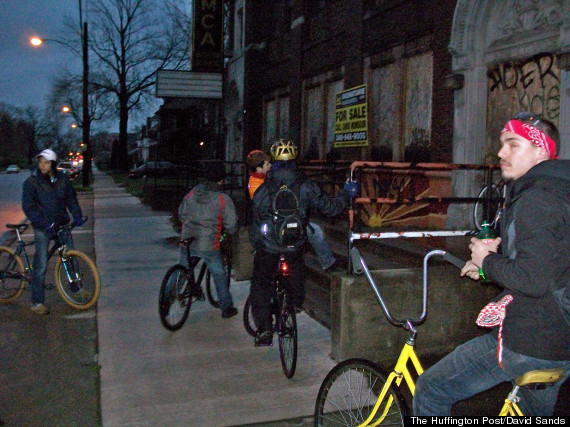 Participants in a Critical Mass ride in Detroit on March 30, 2012.

Like any trip, the Detroit ride tends to have its stops and starts, and has even been declared dead on occasion.

Motown's Critical Mass started with a very small crew around the turn of the millenium. Detroiter Steve Weller, 36, joined several these early rides. At one, he said, police arrested cyclists for wearing Lone Ranger masks. The riders were protesting the Organization of American States, which was in nearby Windsor, Ontario, promoting the expansion of NAFTA free trade policies. The cops picked them up for violating a local anti-mask ordinance. Most of the time, though, Weller said the early rides were laid-back.

"We did a few rides on Fridays, and at the time there wasn't much support like there is now," Weller said. "It was mostly the bike messengers who wanted to do it -- to get together and ride -- just to be part of the process of becoming part of traffic."

These early rides attracted an average of just 10 to 15 people -- hardly a "mass." In the last few years, however, the numbers have surged. Now Detroit Critical Mass attracts up to 600 people in warmer months.

Jack Van Dyke works at The Hub, a community bike space, and participated in a number of rides in the mid-2000s. He said Critical Mass didn't start to really pick up until April 2010, when a group of suburbanites began to organize rides in the city.

"Folks came to the bike shop, they put up fliers, they mentioned stuff to volunteers," he said. "People all of a sudden were getting the word out, and then those rides started right away to be 100 to 200 or more."

Van Dyke said the new rides tends bring in out-of-towners on a seasonal basis from April through October, but a dedicated core crew does its best to keep Critical Mass running all year round. Many of the newcomers drive their cars down to the ride, a behavior some local cyclists find disappointing.

Detroiter Carmen Mendoza-King, 26, is an avid cyclist who sympathizes with the spirit of Critical Mass, but said she's turned off by the involvement of automobiles.

Van Dyke finds humor in the irony of commuters driving to a bike ride, but he hopes the event's newfound popularity will help suburbanites gain a new appreciation for Detroit.

"If bicycling for at least a few people is a way to get rid of whatever preconceived ideas they had and get into the city," he said, "let's use bicycling for that reason."