Detroit photographer Noah Stephens has aimed to show a different side of the city from what frequently makes it into national press, highlighting its interesting, motivated and beautiful people in his portraiture project "The People of Detroit." Now, he's using photography to address another negative portrayal of Detroit: that it is a "food desert" where residents struggle to access fresh produce.

Media accounts that Detroit had no national chain grocery stores (currently false, and a Whole Foods and Meijer store are under construction with the help of subsidies) have been shot down as residents and organizations stepped in to refute the claim. Last September, a report by think tank Data Driven Detroit found 115 full-service grocery stores in the city, not including the large and busy Eastern Market.

But the existence of stores doesn't guarantee a wide selection of fresh produce and healthy foods, nor that they are accessible to residents in a city with a significant lack of public transportation.

So Stephens is going further, setting out to document the city's grocery stores, 111 at his count, with his camera. He aims to create a "visual survey of the food landscape," a project for which he's raising funds on Kickstarter. In just eight weeks, he plans to photograph every grocery store, its produce, shoppers and the routes they take to get there from their homes. He will also interview individuals about their food choices and shopping habits, resulting in a website and photo book.

For Stephens, the project is not just about combatting negative views of the city. Strongly influenced by his own background and family history, Stephens is aiming to determine whether Detroiters' food options are restricted by access or choice, as he explains on Kickstarter:

I've witnessed the relationship between diet and illness first hand. I've watched poor diet cripple and eventually kill the people closest to me. That's had a profound affect on my behavior as an adult.

Since I've been a grown-up, I've lived on the westside of Detroit, in the Cass Corridor, downtown, and on the east side near the historic Indian Village neighborhood. I've never been rich (I actually grew up on welfare), yet I've always managed to maintain a healthy diet, supplied mostly by stores in the city of Detroit. When I hear that healthy food is difficult or impossible to procure in Detroit, I hear a statement that contradicts my entire life experience.

But, as any scientist will tell you, personal experience is not a substitute for data. My experience may be aberrant. The food choices of many Detroiters may be constrained by affordability, transportation, safety, food quality...

The heart of this project is the question of access versus choice. If this massive endeavor reveals that Detroit is populated with grocery stores with ample selection of produce, I hope this project will once and for all empower Americans in low-income communities to see themselves as the authors of their long-term health.

Stephens is looking to raise $10,000 on Kickstarter by Nov. 10 and received a $1,000 grant from the Awesome Foundation. To learn more about the project or make a donation, see the Kickstarter page. 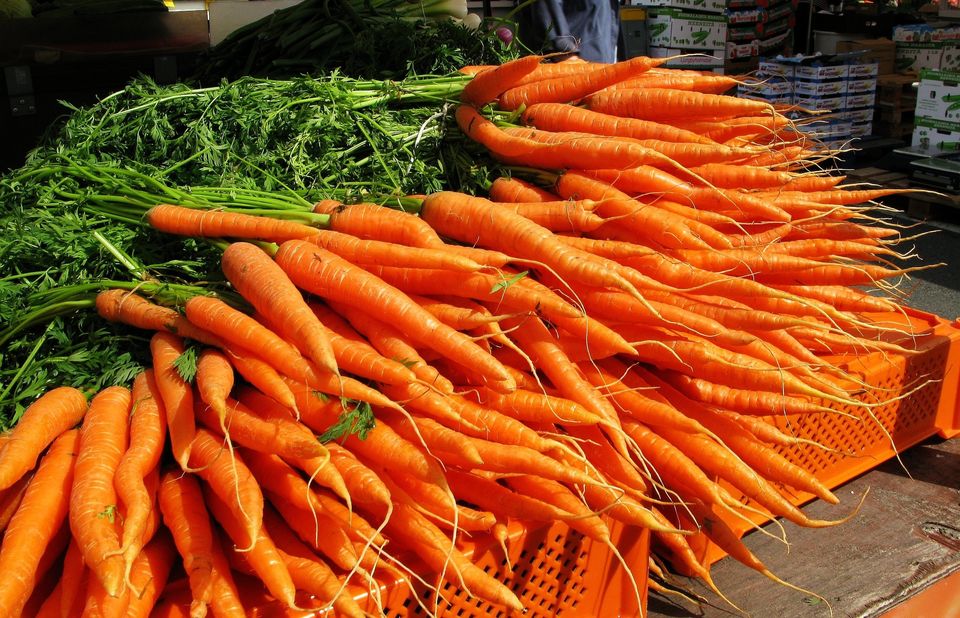 1 / 8
Carrots
<strong>Why we love them: </strong> Another great source of eyesight-boosting vitamin A and beta-carotene, carrots are also rich in <a href="https://www.huffpost.com/entry/healthy-food-healthiest-list_n_1840547#slide=1446491">fiber, potassium and vitamins C and K</a>. Pratt calls them a pumpkin's sidekick, with similar nutrients in smaller amounts. <strong>How to enjoy:</strong> Crunch on the sticks raw or, for even better nutrient absorption, <a href="https://www.huffpost.com/entry/cook-vegetables-health_n_1919785#slide=1575583">try lightly cooking them</a>, reports Everyday Health. Serious Eats shares some <a href="http://www.seriouseats.com/2008/10/in-season-carrots-raw-roasted-sauteed-baked.html">recipes for carrots</a> that include everything from soup to cake (just go easy on the sweets!). Pratt swears by 100 percent organic carrot juice, saying he has a cup every day.
<a href="http://www.flickr.com">Flickr</a>:<a href="http://www.flickr.com/photos/12584677@N06/7439857916">Leo-setä</a>