The Plaindealer broke ground not only as Detroit's first black newspaper but as one of the first of its kind in the country.

Its creators referred to the Plaindealer as an "Afro-American" newspaper, consciously rejecting the term "negro." Founded in 1883 by the brothers Benjamin and Robert Pelham Jr., along with Walter H. Stowers and W.H. Anderson, the publishers saw the publication as a political effort and worked tirelessly at the project, putting it together in the spare time apart from their regular careers. 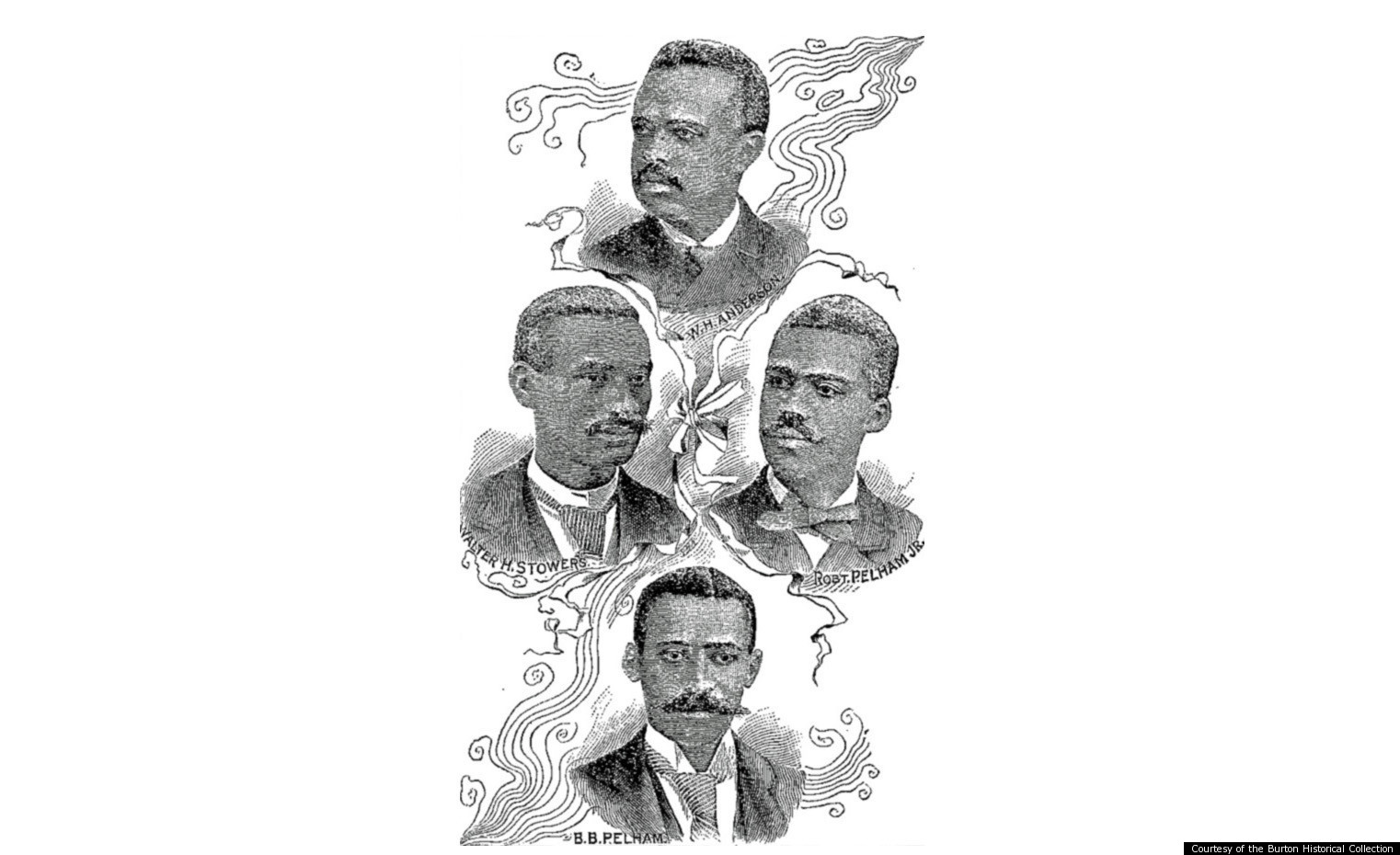 An etching of the Plaindealer's four founders from I. Garland Penn's
1891 book, "The Afro-American Press and Its Editors."

"The Plaindealer was the African-American voice. That was our voice," explained Kimberly Simmons, chair of the Detroit Historical Society's Black Sites Committee and president of the Detroit River Project. "You had a whole group of people here, and the only way they knew what was going on was the Plaindealer. So it was a huge deal."

Only 2,821 African Americans lived in the city in 1880 at the time of the census, but the weekly paper met with rapid success. Simmons said the population was blossoming and hungry for news. This enthusiasm helped the Plaindealer grow from a small folio to a 20-page publication within a few years.

Simmons believes nearly every African-American family in the city at the time would have had a copy of the Plaindealer.

The paper targeted not only Detroit, but all of Southeast Michigan. Simmons says it almost certainly reached across the river to Windsor, Canada. (Benjamin Pelham's wife was African Canadian and cross-border traffic was fluid.)

In his book "Before the Ghetto," University of Kansas Professor David Katzman examined Detroit during the late 19th century, when many different groups constituted the city's African-American population.

Katzman said divisions existed between the different communities, but that the Plaindealer served common interests that transcended any one group.

"They valued family, placed an enormous emphasis on education, valued religion, and were aware of black traditions and culture," he said. "There was a growing interest in things African and cultivated historical interests."

For a contemporary comparison, Simmons described the Plaindealer as a cross between the politically progressive Michigan Citizen and the more traditional Michigan Chronicle.

In its pages a reader could find a wealth of information: coverage of national and local events; an account of the rise of the Afro-American League, a predecessor to the NAACP; event listings for fraternal groups like the Knights of Pythias; gossip and opinion; works of poetry and literature; and columns targeted to women and churchgoers. 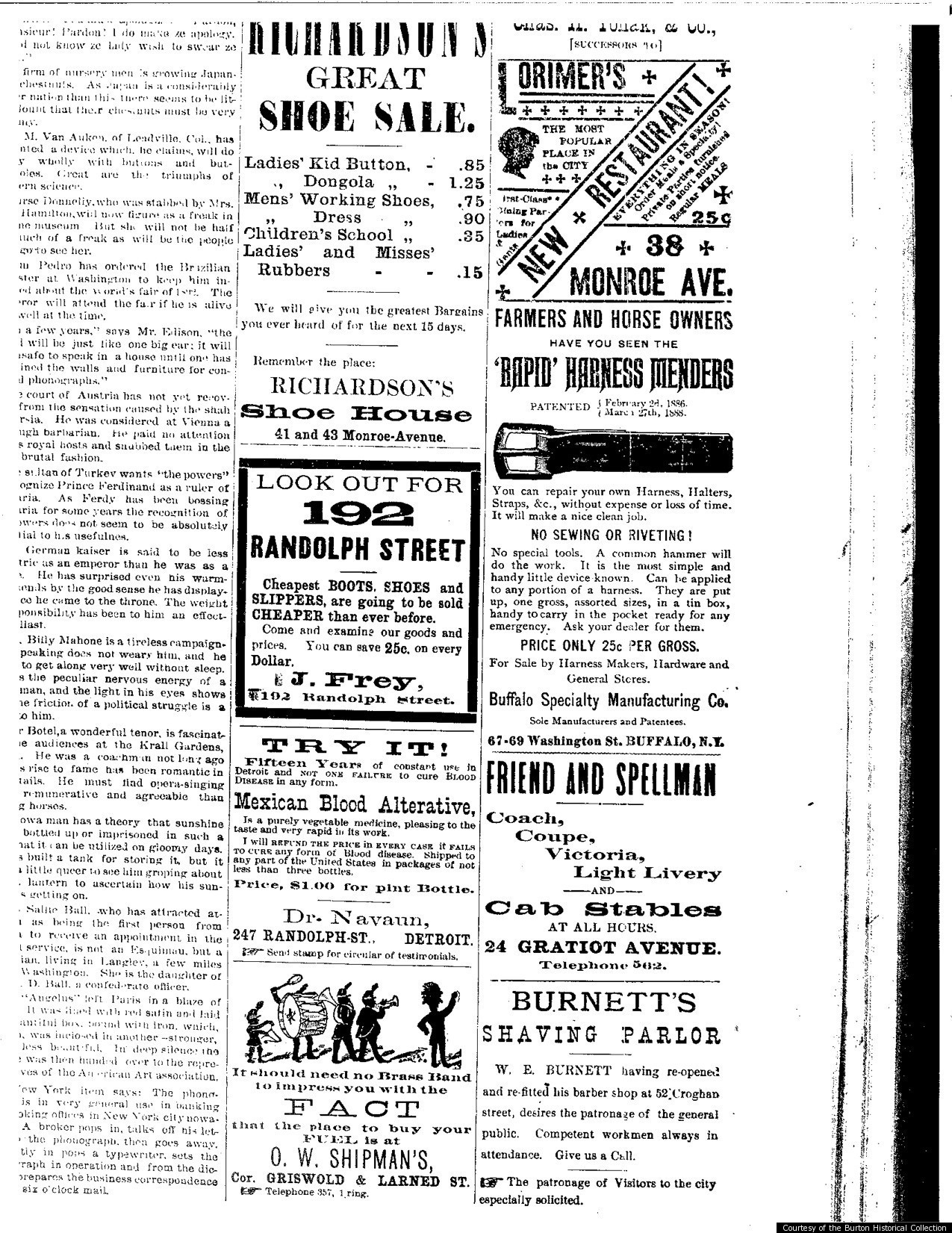 Ads from a later issue of the Plaindealer, featuring boot, health tonic and stable advertisements.

The publishers had a regular correspondence with other black-owned papers of the day and often reprinted articles from sister publications. All four men had prior newspaper experience, either through participation in white-owned media outlets or with Benjamin Pelham's earlier amateur publication, the Venture.

The Plaindealer carefully covered social issues, providing sympathetic coverage to progressive elements in the emerging labor movement and documenting the abuses of Jim Crow in the South and in its less overt local guises.

Katzman said the Plaindealer staff considered civil rights as an especially urgent issue, inseparable from all the other issues covered in its pages.

"It served most the growing middle class and the aspirations of the working class to gain access to education and better jobs -- goals that were dependent on erasing discrimination and second-class status," he said.

The Plaindealer ceased operation in 1894. Neither Katzman nor Simmons know exactly why the paper closed down, though Simmons surmises it may have been due to its publishers' larger career aspirations.

The Pelham brothers in particular rose to extremely prominent positions in local and national politics. Benjamin became the accountant for Wayne County, the most powerful non-elected political position of the time. He ran the county's finances for almost 40 years, earning himself the name "Wayne County Czar."

Robert worked a number of high-profile state and federal government jobs, before eventually moving with his wife to Washington, D.C., to work as a clerk for the U.S. Census bureau, where he invented and patented a tabulation device and a tallying machine.

After 30 years at the bureau, he retired and got back into the newspaper business, editing the Washington Tribune newspaper and setting up a news agency oriented toward African Americans called the Capital News Services.

According to Katzman, publications like the Plaindealer were like African-American churches -- vital institutions that allowed members of the community to express themselves outside of the confines of traditional white-dominated spaces.

"Both Ben and Robert understood the importance of black self-representation, and how black civil rights and advancement depended upon black voices and efforts, not white generosity," Katzman said. "That is what the Plaindealer offered, and was critical in continuing and extending that tradition in black Detroit."

The Plaindealer sports an updated masthead in this November 1891 issue.