In the last five years, a quirky idea for helping others has transformed into an event that has spurred thousands of people to donate more than $85,000 to nearly 100 groups that are improving Detroit with passionate and inventive projects. And it all started with soup.

Detroit SOUP, an organization that hosts recurring community dinners to give out microgrants, is celebrating its five-year anniversary Sunday with a fundraising party. Though this weekend’s event will be a bit of a blowout, held at the city's football stadium, Detroit SOUP has built its success on giving Detroiters an easy, affordable and personal way to do good.

For the monthly dinners, attendees pay a $5 suggested donation to eat a meal of soup and salad and hear four presentations, each under four minutes long, from people seeking funds, whether for a community radio station, literacy program, kids’ four-square tournament or anything else that benefits the community. Then, the audience votes for their favorite, and the winner takes all the donations home. The total award varies by event, ranging from a couple hundred dollars to over $4,000 (that one went to a woman starting a flower farm). 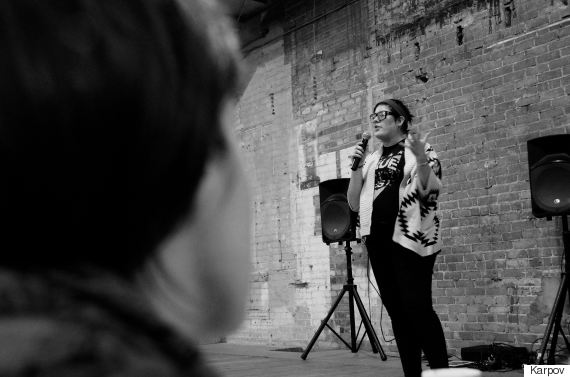 “The system’s messed up, so I removed the rigamarole,” Director Amy Kaherl said about the straightforward funding process, in contrast to the barriers to achieving nonprofit status and applying for traditional grants. Though there’s no oversight in how winners spend their funds, Kaherl told The Huffington Post all but a handful of project leaders have come back to later dinners, as expected, to talk about what they did with the money.

“I feel like people feel accountable to the community once they win,” Kaherl said. “They want to come back with their story.” 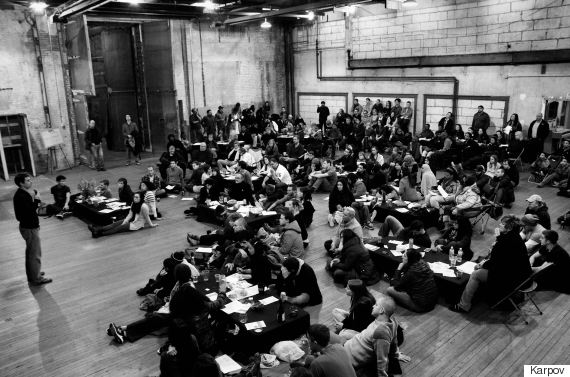 The engagement is part of why Detroit SOUP has worked so well. Diners end up becoming part of the projects, not only giving funds to the winners, but feedback and support that often lasts beyond dinner.

A group of artists held the first, informal event in February 2010, based off the idea of a Chicago project. It’s grown steadily since, and in 2013, a grant helped the organization add nine neighborhood SOUP dinners in Detroit that occur less frequently and are for projects more specific to the smaller communities. Kaherl said the simple model is easily replicable, and she’s helped 60 other communities start SOUP dinners in cities as far-flung as Perth, Australia.

Below, see seven of the eclectic and inspiring projects that Detroit SOUP helped make possible.

Humble Design helps a house feel like a home for the formerly homeless. 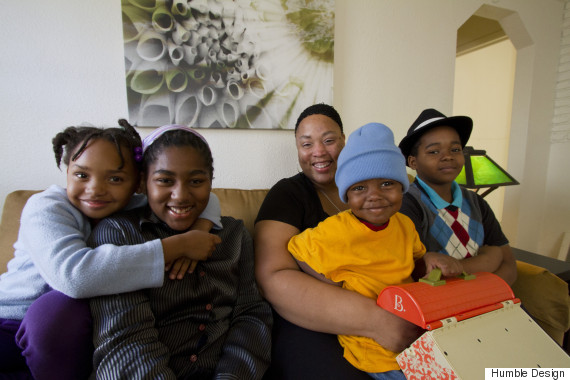 Humble Design furnishes and decorates houses for recently homeless families. They provide essentials like second-hand and donated furniture and cookware, as well as art for the walls and other design touches.

“I’ve come to realize that with our help, families stay where they are,” said Treger Strasberg, co-founder and CEO. “They have pride and hope back in their homes. We’ve found doing this helps people get out of the cycle of homelessness.”

Shakespeare in Detroit is reinvigorating the city’s theater scene. 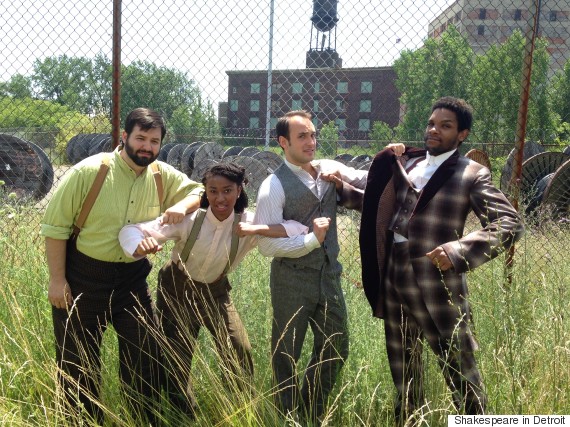 Shakespeare in Detroit is a new theater company performing Shakespeare in traditional and creative venues. Founder Sam White won a SOUP grant of $1,300 last year, just after her Kickstarter campaign failed. Without SOUP funding to build a set, White said she would have had to postpone or cancel a scheduled performance of “Anthony and Cleopatra.”

“That show opened a lot of opportunities for us,” White said about the show, which took place in an unheated recycling center in 11-degree temperatures and was attended by several SOUP audience members. “For people to come out and sit here, bundled up with 10 blankets, some of them, with their toes frozen … I thought to myself, OK, we’ve got to keep going. For Detroiters to show up for us like that I have to show up for them from now on.”

Operation 'Turn Parking Lot Into Fitness and Well-Being Paradise' is giving kids the power to improve their neighborhood. 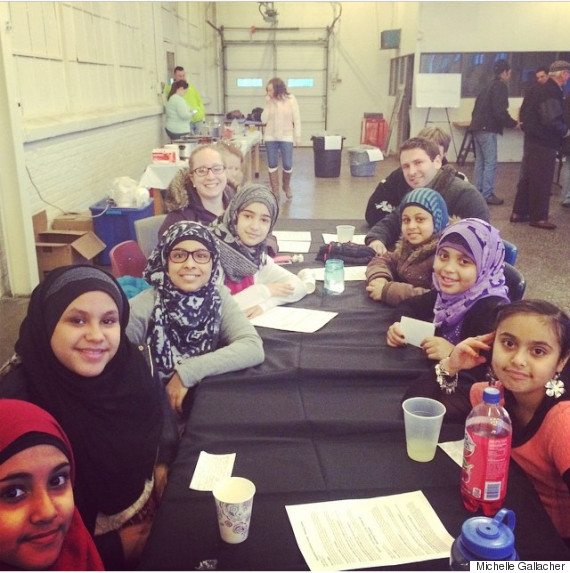 Michelle Gallacher’s students prepare to give their SOUP presentation.

Michelle Gallacher is a reading specialist at an elementary school who decided SOUP seemed like the perfect opportunity for a group of passionate students. Together, they came up with an idea to improve their neighborhood: turn an unused parking lot into a "paradise" as cheaply as possible, using paint to mark off a soccer field, hopscotch courts and free-throw lines for basketball hoops. The kids wrote the initial application and the presentation, practicing public speaking and making visual aides. They won $780 in January. In April, they’ll start planning and make a budget, and they’ll get to work in May when the snow has melted.

“Kids do a lot of writing, but the writing ends up being just for the teacher,” Gallacher said. “They don’t often have a chance to hear their writing and speak. … This was an opportunity to prove that their writing can be powerful and give them a voice.” 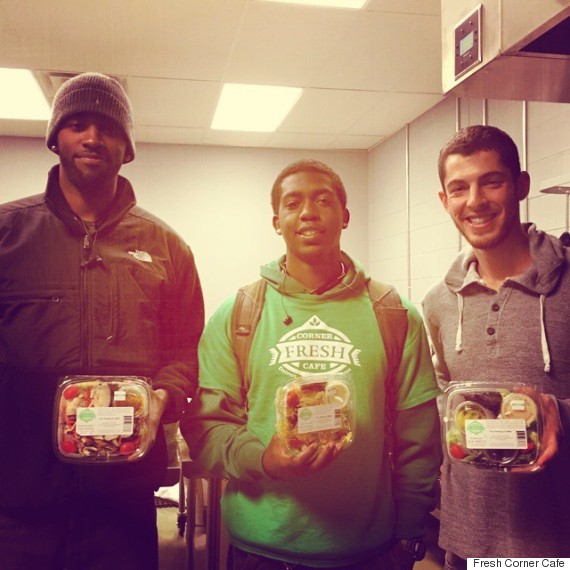 Fresh Corner Cafe is an example of how you don't have to give up because a great idea doesn't work out as you’d hope. They won $670 at one of the first SOUP dinners when they were just getting started on their mission to bring local, healthy food to Detroit’s corner stores and gas stations.

At one point, co-owner Noam Kimelman said, they were bringing food to more than 30 locations -- but while succeeding in their mission, they were losing thousands of dollars. So they reconfigured their plan and began providing meals to offices; this subsidizes their efforts to bring prepared meals and local food products to stores. They provide food to 10 stores for now. 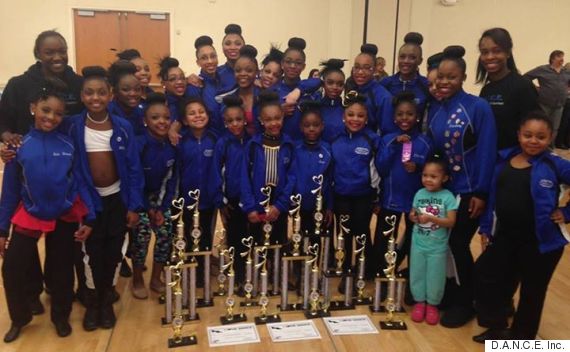 D.A.N.C.E. Inc. is a nonprofit, started by three college students in East Lansing, Michigan, in 2007. When they graduated, the woman also brought their dance program to Detroit, where they teach ballet, tap and an array of dance styles to students ages 3 to 18, amateurs to professional-bound. Students, who pay on a sliding scale, also have to maintain good grades and complete community service hours. D.A.N.C.E. Inc. has won a total of $4,000 in two different SOUP dinners, which they’ve used for equipment like mats, mirrors and flooring.

Lots of Love is sharing tools and time to help clean up Detroit's vacant lots. 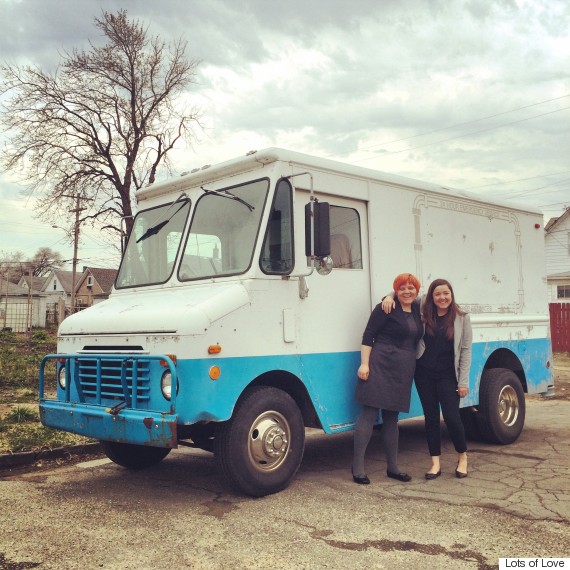 Lots of Love was started last year by Becki Kenderes and Chelsea Neblett. In their community development work, they noticed that often, groups didn’t have the supplies and tools they needed. So they came up with the idea of a traveling tool lending library, and got their first dollar from SOUP when they won $900 in April. Pooling the funds with other donations, they purchased a former ice cream truck and filled it with lawn maintenance equipment. They bring their library -- along with their expertise -- to groups working on projects like vacant lot cleanup. Their first summer, they worked on 15 projects and plan to increase that this year.

“What was significant about Detroit SOUP is that it connected us with so many interested people, people who wanted to volunteer, people who wanted to donate,” Kenderes said. “For the first time, we had a sense of accountability that we actually had to make this project a reality, whereas before it was just an idea.”

Burners without Borders Detroit is helping the homeless, a backpack at a time. 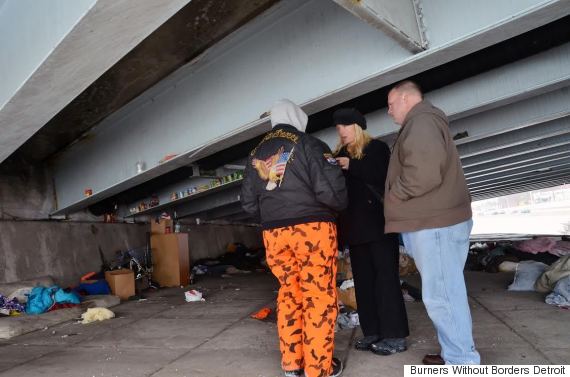 Ronald Parrish and Danielle Doxie Kaltz under a highway bridge chatting with a man about he needs. Courtesy Burners without Borders Detroit.

Danielle Doxie Kaltz started Detroit’s Burners Without Borders (associated with Burning Man) before she named it anything, when in 2007 she began bringing food and supplies to homeless people she encountered in the city. It became a routine, and soon grew into an organized group that would fill backpacks with supplies, including food, socks, ponchos and gloves, which they would hand out to homeless people.

Kaltz, who won $700 from SOUP in 2011, said her one rule for volunteers is to exchange names with the homeless to ensure empathy.

“We have no overhead, we just have people who are passionate about helping out,” Kaltz said. “We don’t have the skills to get somebody off the streets, but we can give compassion and human connection and a bit of supplies to get through an evening, or maybe two.”

See Detroit SOUP's site for tickets and information on their five-year anniversary fundraiser Sunday at Ford Field in Detroit.