You hear a lot of generalizations about the Motor City: Detroit is dead. Detroit is saved. Detroit is the new Brooklyn. Detroit is an urban wasteland. Sure, Detroiters are used to hearing these things, but that doesn’t mean they’re not sick of it.

Some residents discussed those misconceptions and other topics Tuesday in a Twitter conversation about their city. The chat was organized by local news site Model D, youth-focused nonprofit the Skillman Foundation, and moderators Aaron Foley and Lauren Hood.

Using the hashtag #YourDetroit, the conversation touched on topics that go deeper than 140 characters allow.

“There’s a lot that gets trotted out in the media, whether it’s local or national, about what any one part of Detroit is,” Skillman Senior Communications Officer Krista Jahnke told The Huffington Post. “It’s starting to just feel like some of the nuance, and some of the great differences that there are, in all the parts of Detroit, keep getting lost.”

But the misconceptions don’t just come from media and outsiders, said Foley, who is currently writing a book titled How to Live in Detroit Without Being a Jackass.

“Some of the newer residents, black, white, whoever, are so insulated in their own circles and bubbles that they have preconceived ideas of what they think Detroit is,” Foley said. “The only thing I'd add [to the chat] is that it could've been maybe 50 percent more honest.”

Below see 11 Motor City misconceptions mentioned in the #YourDetroit chat.

1. Detroit is an abandoned city of ruins, “like an American Pompeii.”


Outside misconception: Detroit's buildings are all vacant, dilapidated and/or burnt out and need to be torn down #YourDetroit

Detroiters know more than anyone how many blighted and vacant buildings exist, from the dramatically massive train station to the houses on their blocks they’ve spent weekends boarding up and worrying about. But it often seems that outsiders who talk about abandonment forget that people live next to these structures, and the empty buildings matter because they affect those residents.

It's also worth noting that Detroit has its share of famous architecture, new buildings and well-maintained homes. 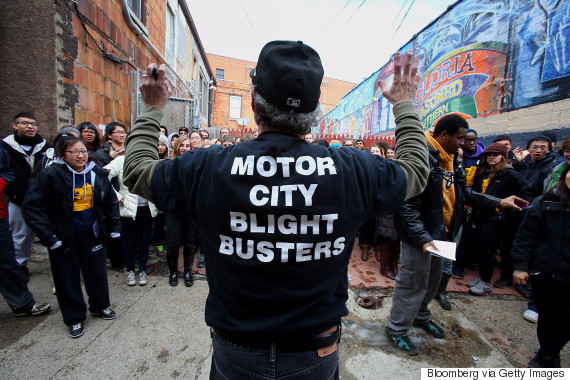 John George, founder of Blight Busters, directs a group of volunteers helping to clean up a section of Detroit. Fabrizio Costantini/Bloomberg via Getty Images.

2. Detroit’s greater downtown area is thriving, but no other place is.

No good areas outside Midtown RT @deepdivedetroit Q2: What’s a common misconception you hear about whatever you consider #YourDetroit?

As revitalization occurs, new residents and outsiders somewhat familiar with Detroit often talk glowingly about the changes in midtown and downtown, areas where there have been large infusions of capital. But the 7.2 square miles of neighborhoods that make up greater downtown only represent about 5 percent of the city.

Residents in neighborhoods outside of the city’s core shouldn’t be overlooked when it comes to economic opportunities, and the good things that already exist in other neighborhoods shouldn’t be ignored. Take, for example, the slow and steady revitalization of the Avenue of Fashion district, the successful crowdfunding of historic-styled streetlights in Sherwood Forest or the opening of a robotics engineering center for high school students in southwest Detroit.

Jahnke said the Skillman Foundation planned the Twitter chat because they’ve been thinking about “all the different people and places that contribute to the city’s future and the idea that that needs to be an inclusive experience” for both longtime residents and recent transplants.

“Neighborhoods can’t be left behind,” she said, “but newcomers have to be welcomed, and that's the only way to move forward."

3. Detroit has been completely transformed by new restaurants and retail.

A bakery, no matter how delicious its pies, will not save Detroit. And more generally, while it’s great that new eateries and entertainment options are opening in the city -- and they're necessary to attract some residents -- it doesn't erase the city's other issues.

4. No one would live in Detroit if they could leave.

It's difficult to live in Detroit (though in very different ways than other notoriously difficult cities, like New York). Detroit's high crime and unemployment rates, coupled with broken education, transportation and lighting systems have, in the last few decades, pushed many people to leave the city; there are others who would like to move but don't have the means.

However, there are still those who have moved here, or stayed because they wanted to. People have put down roots, stayed for family or jobs, started businesses or gotten invested in community service programs. There are people who have pride in Detroit and believe in its future. 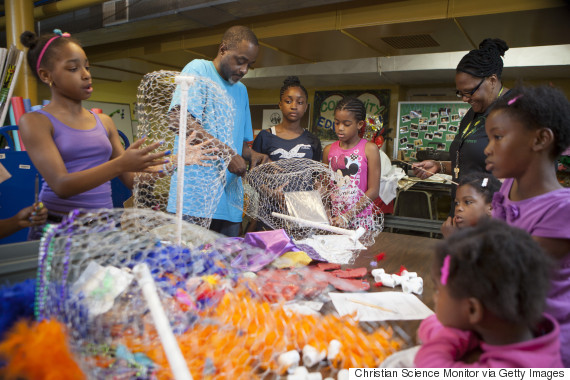 Demien Deyonte (second from left) leads a group in building life-size puppets at the Mt. Elliott Makerspace, on May 25, 2014 in Detroit. Melanie Stetson Freeman/The Christian Science Monitor via Getty Images.

5. Detroit isn’t a place for families.

@DeepDiveDetroit Misconception: You can't raise a family in Detroit #YourDetroit

As Detroit has attracted more 20-something young professionals in recent years, the idea that the city’s a great place for young people to find cheap rent and hang out, but not raise families, has gotten more traction. Of course, there are plenty of families in Detroit, and children make up more than a quarter of the population, more than the state rate.

6. There are no good schools in the entire city.

If i had kids, I would never send them to dps unless it was Cass Tech or the 2-3 other top high schools. #YourDetroit

#YourDetroit -- there are great schools and there are not so great - but you can find a great one if you try... a wonderful opportunity...

Education was one of the most discussed topics during the #YourDetroit conversation, and views varied widely on the strengths and failings of the educational opportunities available in the city. No one seems to disagree that it’s a fundamental issue the city needs to address, but some objected to the way the city’s schools are often uniformly dismissed (and the assumption that then follows about students' abilities).

7. Detroiters are lazy/uneducated/apathetic, and if they actually cared, they’d make their city better.

@pennybailer @Developing_KIDS every stereotype you've been trained to believe about #Detroit youth is usually NOT the case. #YourDetroit

Misconception: detroiters are content with malfunction and dysfunction #YourDetroit

"They" don't want to work RT @DeepDiveDetroit Q2: What’s a common misconception you hear about whatever you consider #YourDetroit?

There are plenty of stereotypes about Detroiters, like Ted Nugent’s assertion that they're “pimps and whores and welfare brats” who destroyed the city. Toned-down versions of that sentiment are repeated often, but no one suffers more from the city’s lack of jobs than the people who live here. 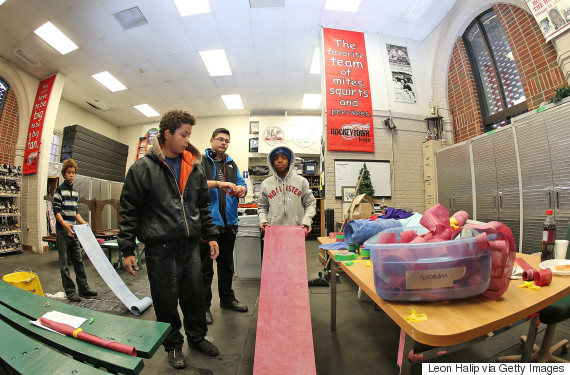 There's no denying crime is a critical issue in Detroit. After all, it’s one of the things that’s caused many to leave. But those who have heard the city leads in murders have a skewed vision of the city's violence, which is not treated as a normal fact of life, but battled by community groups and the city. It also doesn't keep people from walking dogs, sitting on porches, visiting museums and generally managing to live safe and healthy lives.

9. Detroit caused its own problems.

Misconception: That Detroit's problems are its own & not tied to the actions of the region, state & feds. #YourDetroit

When you look at Detroit’s decline, it’s easy to wonder how it got this way. Too often, Detroit’s struggles get blamed solely on its leadership, without taking into account the region’s complex (and often racist) history. Foley mentioned former Mayor Coleman Young as an example of how misconceptions about Detroit’s leaders divides the city.

“I think longtime black Detroiters love Young because he inspired them to do better and be proud of themselves, but most people who move to Detroit only associate him with the famous [misinterpreted] 8 Mile quote. … Also because he ran Detroit for 20 years and therefore he's easy to point to for Detroit's decline.”

On the flip side, while some outside of Detroit have been reluctant to acknowledge the role the region and state played in the city's decline, some Detroit residents are wary of intervention from outsiders and just as unwilling to recognize the importance of regional cooperation to the city's future success.

10. Detroit is a blank slate, and you can be its savior.

A2: In "Old Detroit," where we do most our work, there is misconception that ppl haven't been working for change for yrs. #YourDetroit

For the most part, Detroiters welcome newcomers to open coffee shops, plant urban gardens or start literacy programs -- as long as they are conscientious, willing to listen to the people they say they want to help and don’t expect too many pats on the back for doing work others have done for years.

11. Detroit is the phoenix rising from the ashes.

A2: Folks either buy into endless hope & opportunity OR immense challenge & despair. Both are present for everyone. #YourDetroit

It’s hard to count whether there are more people saying Detroit is dead or reborn. All of the misconceptions mentioned above (including those that contradict others), harm more than Detroit's image; they simplify and dismiss a city that contains thousands of narratives. Detroit deserves a closer, more empathetic look. After all, it's a city that 700,000 people call home; there are 700,000 variations of #YourDetroit. 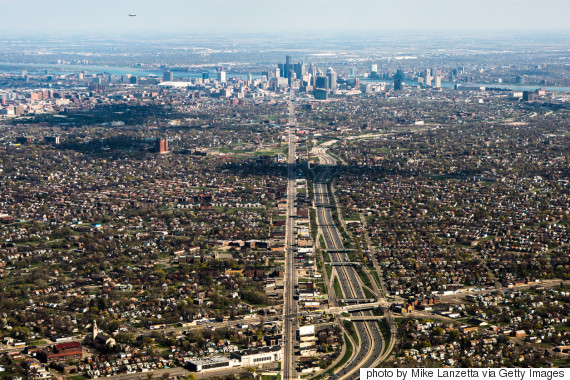