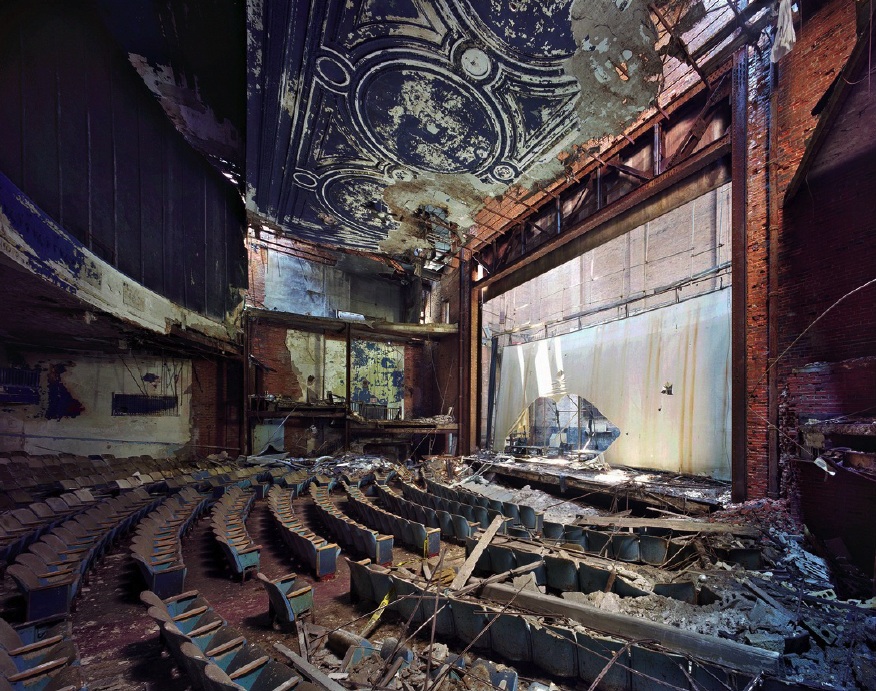 Yves Marchand and Romain Meffre met online in 2002, drawn by their love of contemporary ruins. Meffre was only aged 15 when he met Marchand, and they began visiting ruins in the suburbs of Paris to capture the lost grandeur of old movie theaters and document architecture in decline. In the beginning they took images separately, but after investing in a large format 4x5, they began their collaboration. They spoke to me recently from Paris about their photographic project, "Detroit in Ruins," published by Steidl in 2010.

Their visions of Detroit are the record of a fallen empire. What makes the duo's work different from Robert Polidori's photographs of post-deluge New Orleans and Chernobyl is that their focus is not a record of the aftermath of a natural disaster but of slow decay, caused by neglect. The photographs reveal the exotic in the ordinary and observe what is overlooked: dilapidated habitations, the hidden backs of dwellings, obsolete machinery, utilities in disrepair, the absurdity of once hi-tech systems, the extravagance of architecture devoid of function. The simple poignancy of a disused dentist's chair seems to reflect on the collective failure of a civilization to rise. But Detroit is only one of many world cities, and these images are universal in their depiction of the fragility of human empire-building. 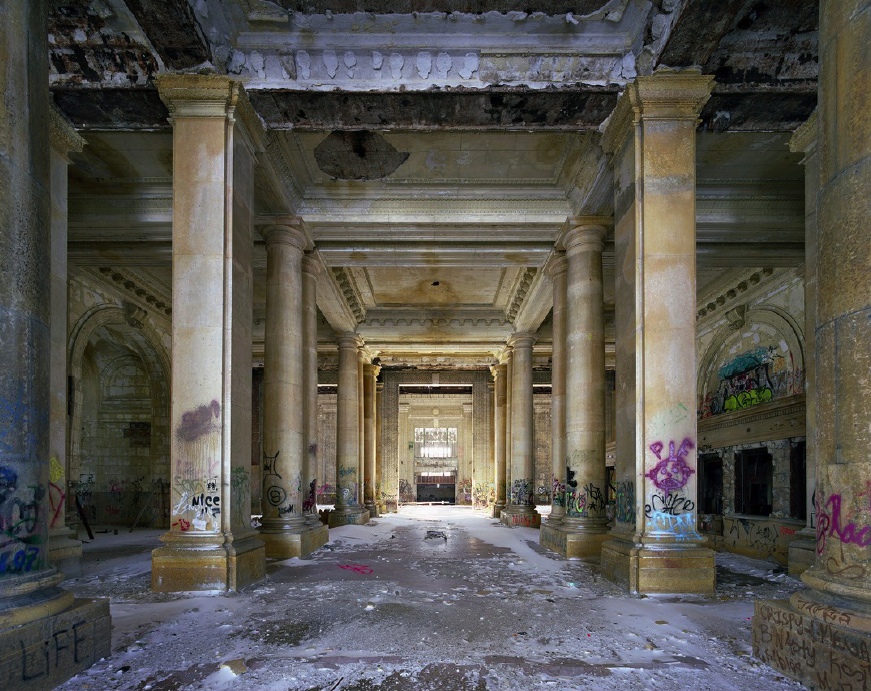 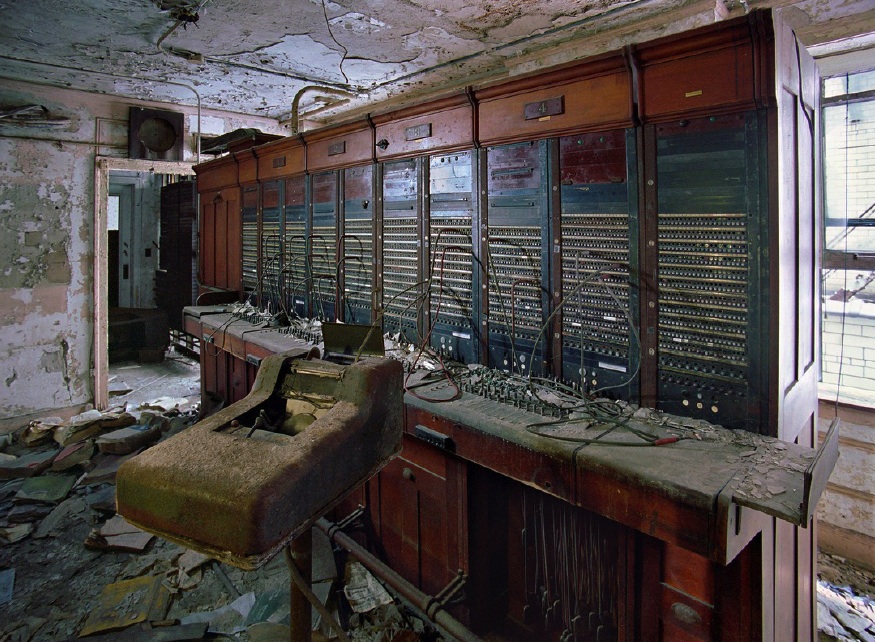 Working as a team, the photographers have formed a creative bond, sharing a vision so strongly, they tend to finish each others' sentences in conversation.

I asked, why America? It is a place where old things are replaced quickly, and still a country evolving its sense of antiquity.

"We'd been taking pictures around Paris when we saw images of Detroit," said Meffre. "It seemed much more a world-city falling apart. In France there were smaller places - but Detroit looked like a ghost town compared with elsewhere." It was their interest in modern decay that drew them to America. Says Meffre, "It depends on what you are looking for, Americans probably have the best architectural heritage from the 20s. That is the place where big buildings were made. Early American buildings of the 20th century are symbolic in a way you would not find anywhere else."

In Asia and in developing countries the speed of urban renewal is much faster than in countries with slower economic climates. "Sometimes buildings are around for only 20 years before they are demolished to make something bigger," continues Meffre, "In Detroit it is the opposite: nothing was rebuilt and very few buildings were made in the 50s - buildings remained derelict, and those that were demolished were replaced by parking lots. It is a very unusual concept of a city."

Apart from the decline of the automobile industry, Detroit's story is one of self-destruction that began with its policies of racial segregation. The wealthy whites migrated to the suburbs fleeing the influx of African-Americans seeking economic opportunities, creating a white noose around the increasingly poor black inner-city, choking off funding for its infrastructure and the cultural incentives it needed to survive.

The boom and bust cycles have left architectural residues - collapsing rings around Detroit's urban sprawl. Still, we rarely let things lie as our civilization constantly looks back on its own traces, reexamining its own recorded past, too busy dissecting and foraging its own history to let things turn into relics. It is rewarding then to see that a few decades of neglect and forgetfulness can reveal such resonant windows into our past.

I asked why they thought the owners of these deserted properties had chosen to forget them. "It depends," said Meffre, "most of the building owners in downtown are billionaires who own entire blocks. The price went too low, and there were no valuable projects. They were waiting to turn them into condos and new lofts - the owners have been waiting for 30 years..."

They cannot remain vacant forever. I imagined that they would eventually be demolished?

"It might happen in downtown Detroit within a few years," says Marchand. "Most of the buildings we've been to will be converted into luxury condominiums. They try to make rich people from the suburbs move back downtown. But in other areas where they have no money for electricity and rent, they have to close the buildings. So they are sitting empty and decaying, waiting to be demolished or to fall apart." 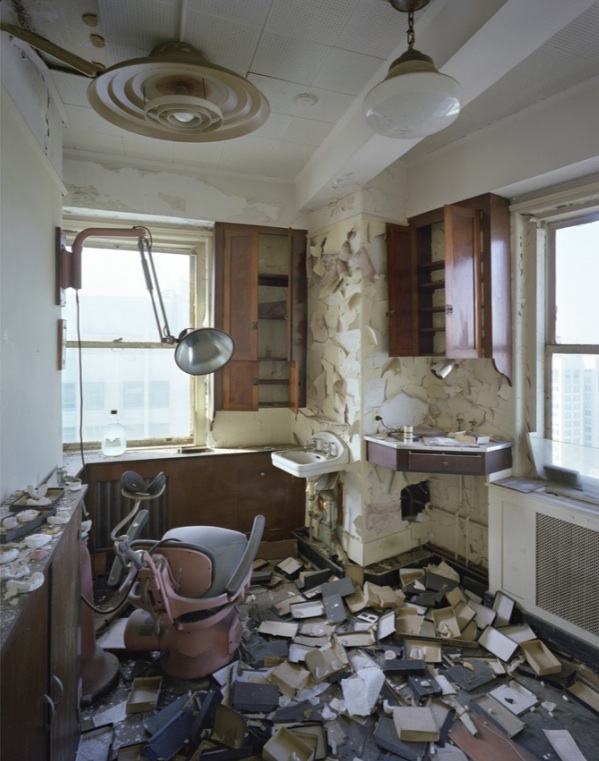 On the other hand who can complain when vast tracts of downtown Detroit are being reclaimed by nature. Like the ancient temples of Cambodia the earth always wins against the will of men. The city's asphalt is cracking open and reverting back to prairie; foxes and deer are making malls and parking lots their new hunting grounds. The green invasion may enable a new vision for urban agriculture.

The pair do extensive research before each trip, and I had wondered how they had come across the dilapidated buildings and gained permission to enter them. "We researched from books," says Marchand, "and also online Google maps, Bing maps; aerial views where you can find potentially closed buildings. Concerning access, we usually wait for the door to be opened by some scavenger... admits Marchand, wistfully adding that "in Detroit it was just a matter of time [before these buildings disappeared]... Even when Detroit tries to secure them, it will not stay that way for very long."

They had a similar experience photographing old movie theaters and performance spaces: "It was not possible to modernize or renovate the big theaters. Most of them are sitting there to be developed into a concert hall or a new project but [sometimes] they are too big... In New York, Chicago Los Angeles, it is the same. A lot of them are being demolished." 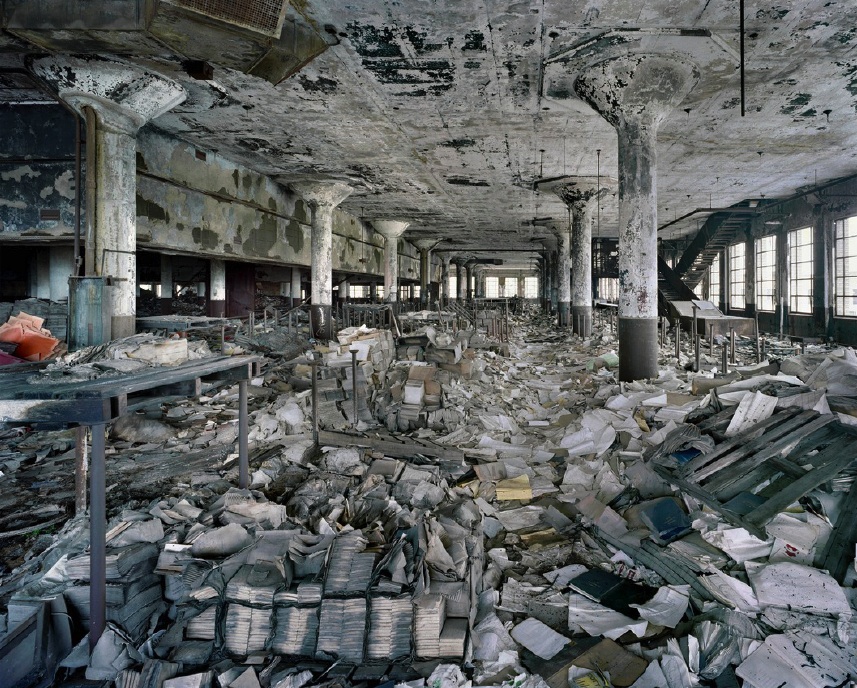 In some ways they are modern archeologists, unearthing the forgotten splendors of the past, the abandoned and the discarded leftovers of civilization. Were they interested in going back deeper into the past, to photograph castles and mansions of old Europe?

"Sometimes we go back earlier to the 19th century," said Meffre. And in Europe they had explored remodeled castles that went back originally to the 16th century: "It is monumental, delusional architecture. [But] we are more interested in the current epoch," said Romain Meffre.

Though the Detroit premises are largely devoid of people, they remain stained by the lives of those that had inhabited them, which makes them more captivating than the hosed-down artifacts of museum archives. The photographers try to add notes on their histories, their architecture, and function. "We try to find pictures of the place while it was alive just to imagine how it was," said Meffre, "there are also lots of books concerning how those places were before; and we get a lot of emails from people who tell us they used to live in these places. Quite moving." 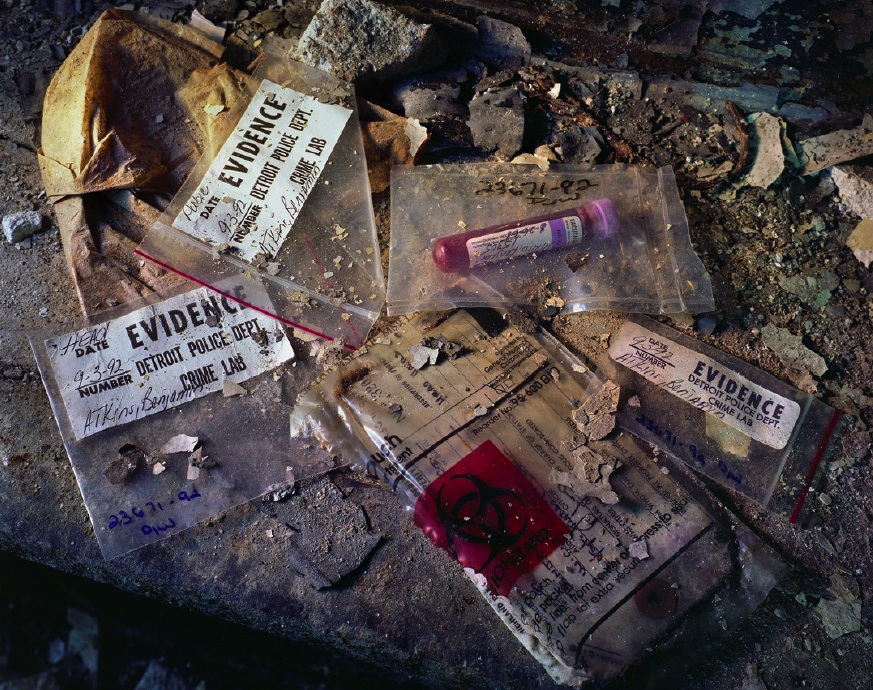 At the Highland Park Police Station they came across blood samples and evidence from the investigation of a Detroit serial-killer who had murdered several women.

So you photograph these remnants, then leave them, and walk away?

"We try - we don't know what happens - it is on Ebay probably right now... we can find some of the old polaroids being sold on Ebay," they say, amused by the sudden onset of interest.

Once unearthed, photographed and published, the places are irrevocably changed, and attention can either bring the public's awareness to the need for preservation, or it can hasten demise. "A lot of the buildings are not very cheap and we hope that some people will buy and restore them," says Meffre. "Sometimes attempts are made, and at times it doesn't work. As Detroit is coming back and there is international attention, people will realize maybe there is a lot of heritage buildings and some people want to preserve them - but there just is no money."

Some of the sites seemed abandoned in a hurry, as though disaster struck mid-day, Pompeiian-style, leaving dusty closets still filled with clothes, kitchens fully stocked, the grand concert halls had suddenly emptied, laboratories appear to be deserted in the midst of experiments. One almost hopes, that like enchanted palaces, they remain buried for another thousand years, preserved as time-capsules for future treasure-hunters to break their spell. 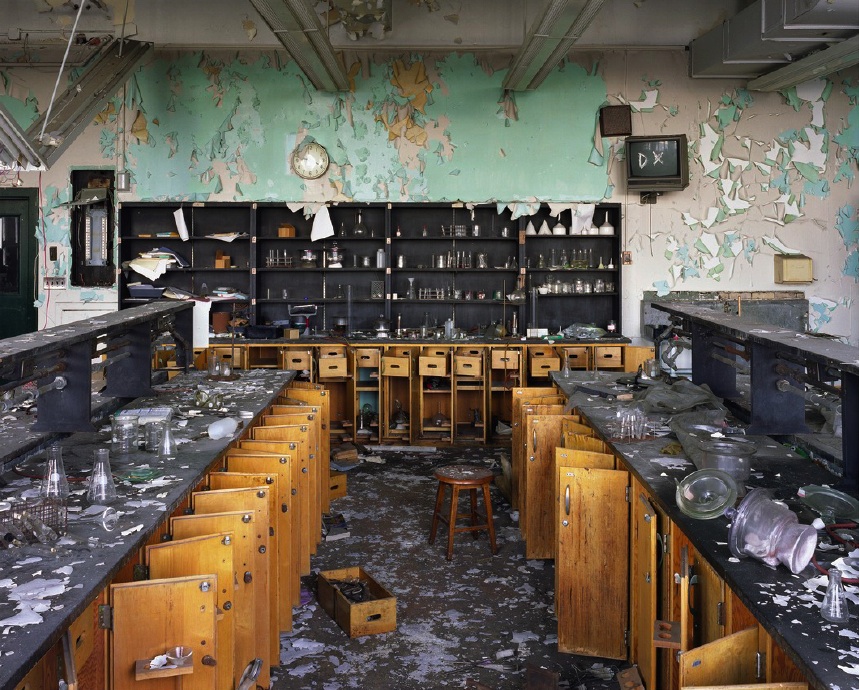 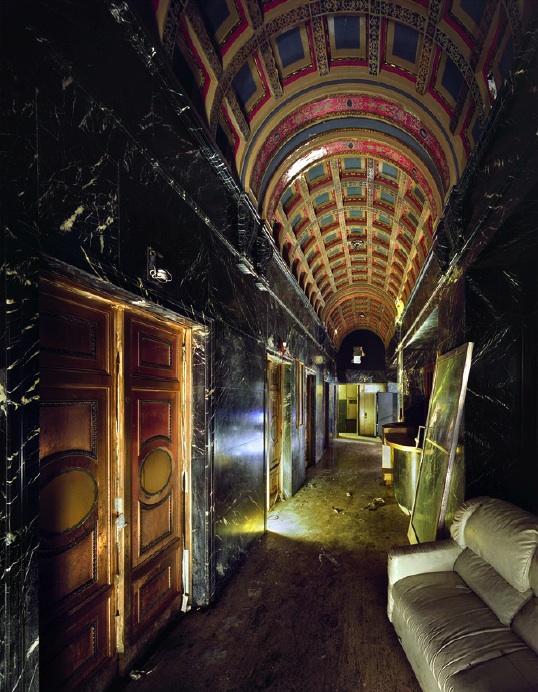 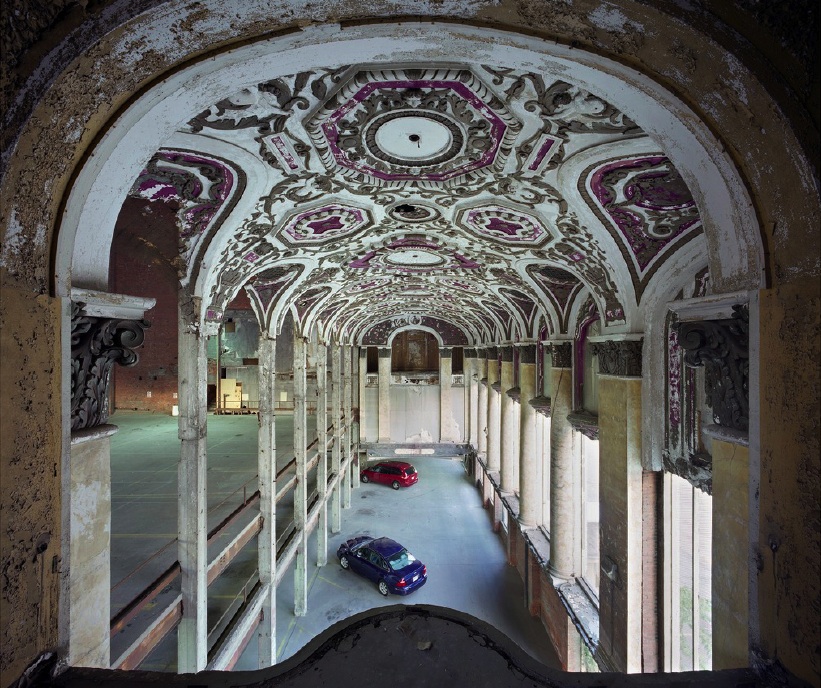 Here is poem that resonates on the rise and fall of past ambitions, Shelley's Ozymandias:

Ozymandias by Percy Bysshe Shelley
I met a traveler from an antique land
Who said: Two vast and trunkless legs of stone
Stand in the desert. Near them, on the sand,
Half sunk, a shattered visage lies, whose frown,
And wrinkled lip, and sneer of cold command,
Tell that its sculptor well those passions read
Which yet survive, stamped on these lifeless things,
The hand that mocked them, and the heart that fed;
And on the pedestal these words appear:
"My name is Ozymandias, king of kings:
Look on my works, ye Mighty, and despair!"
Nothing beside remains. Round the decay
Of that colossal wreck, boundless and bare
The lone and level sands stretch far away.