With chants of "water is a human right" and "no water, no peace," protesters demanded an end to the shutoff of past-due accounts and declared the situation a public health emergency. Detroit police arrested nine demonstrators, including one in a wheelchair, outside a facility used by city water contractors earlier in the day.

"This whole water situation is so egregious, so unfair and unreasonable," said Richard Hairston, 63, a Detroit retiree who marched with the crowd. "There's an awful lot of anger. Water is just too essential to play with in this manner. Detroiters are going to fight back in the event this thing is not done in a thoughtful and considerate way."

The water utility has recently ramped up the shutoffs as it seeks to collect an estimated $90 million in past-due water bills. Detroit, which last year became the largest U.S. city ever to file for bankruptcy, has said that roughly 90,000 customers have outstanding accounts, with about 17,000 residents on payment plans.

Ashley Thomas, who lives on the Detroit's west side, said she knows several people in her neighborhood who have recently had their water cut off. Even if residents are too poor to clear up their accounts, they still deserve to have water, Thomas said.

"I'm in a neighborhood where the majority of us live in poverty," Thomas said. "Some of our people have newborn babies they need to take care of. They need water to survive."

Friday's protest was organized by National Nurses United, the largest labor union of registered nurses in the country, and it was clearly buoyed by the presence of Netroots Nation, the annual progressive confab that's taking place at the city's convention center this weekend.

The nurses' union declared the shutoffs "immoral" and the city of Detroit a "public health emergency zone."

"That our country will do this to vulnerable people who can least afford to pay right now is unconscionable," said Jean Ross, the union's co-president. "When you're forced to choose between your water bill and food, or your water bill and a roof over your head, people are going to do what they have to do. Many of these people are only behind two water bills."

The rally enjoyed a bit of Hollywood star power thanks to Mark Ruffalo. The actor had appeared on stage at Netroots Nation Friday morning after a speech by Sen. Elizabeth Warren (D-Mass.), surprising attendees with the news that he'd join the protest later in the day.

"What's happening in Detroit is a model for what can be happening to the nation," Ruffalo said from a podium. "Instead of a nation for the .01 percent, it's a nation for all of us. Resistance and resilience. Water is a right."

Community groups have even appealed to the United Nations in hopes of forcing the city to restore service to residents who've been cut off. U.N. experts responded by saying shutoffs could constitute a breach of the human right to water and sanitation, if residents have a "genuine inability to pay."

Detroit resident Donald Abdul Roberts, who was taking photos of the protest from the sidewalk with his cell phone, said he agreed with the groups that have sought help from the U.N.

"It's in violation of international law," Roberts said. "And everybody who's got a little bit of sense knows that if they do it in one place and get away with it, it'll spread elsewhere."

Scenes from the rally: 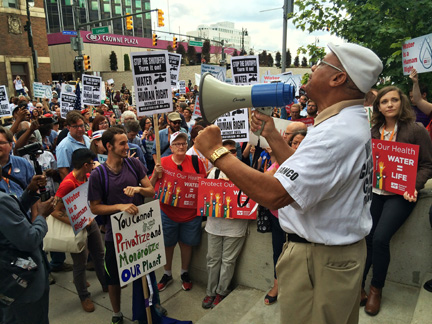 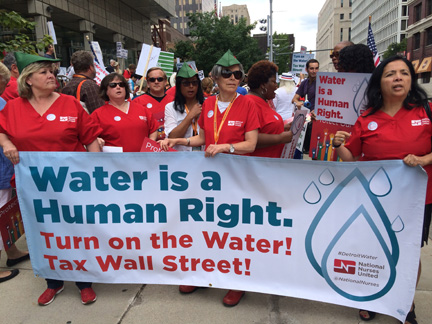 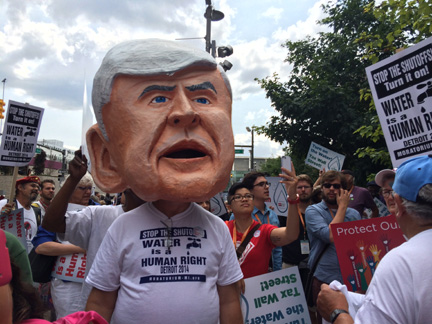