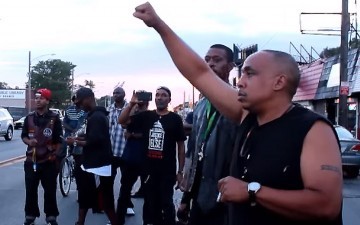 The Motor City, long a home of Black empowerment movements, has given birth to a millennial seed of socio political awareness

As Detroit, the most densely Black city in the country, faces water shutoffs, land grabs, and the displacing impacts of "revitalization," a new generation of activists has emerged to join decades of liberation movements that came before them.

The Motor City was a hotbed of Black activism dating back nearly a century. The Nation of Islam and New Afrikan Independence Party were each founded in Detroit, where the League of Revolutionary Black Workers and Dodge Revolutionary Union Movement both played critical roles in domestic and global labor struggles.

Today, with many organizers and organizations from the Black Power and the era of mayor Coleman Young still active in the city's political struggles, the current generation has decided to inject its own voice into the conversation.

"A lot of people who are older than us are looking at us hoping that we'll take the reins," said Adrienne Ayers, 23, co-founder of the Coalition for Black Struggle. "And that's what should happen because we're the ones who have the energy and the vitality to keep it going."

Over the past year, Black Detroiters in their 20s and 30s have launched organizations and initiatives focusing on land and water justice, housing and economic cooperatives, gender and sexual liberation, intra-community gun violence, and a platform to elevate the narratives of youth.

New Era Detroit is one of these organizations. Founded in August 2014, the organization focuses on leveraging Black social and economic power in the city and building intra-community unity.

"We're a very grassroots organization," said Negus Vu, 33, the vice president of NED. "We deal with the common people on a very intimate level. We believe in doing things from the bottom up."

Every Saturday between April and August 2015, NED organized a program called Hood 2 Hood. Moving by zipcode across the city, members knocked on doors to talk about the organizing potentialbehind Black America's $1.1 trillion spending power, built relationships with Black businesses, and called on people to get involved in the community.

In the next few weeks, NED plans to open an after-school program and a streetwatch team.

"Camille and I started the Archives with the idea that Detroit writers and creatives deserved a platform to showcase their work," Watkins said. "We recognize that there are so many people out here everyday making sure that Black Detroiters are not ignored in the gentrification and neocolonialism that's happening here right now, and we know that there needs to be a way to stay connected."

Watkins along with Kevin Rigby, Jr., 21, are co-founders of the Detroit chapter of the Black Youth Project 100, the newest youth organization in the city. The pair said they were interested in bringing BYP100 to Detroit due to the national network's ability to merge action, civic engagement, education, and policy advocacy while unapologetically centering the issues and leadership of Black women, trans and queer people.

BYP100 has already met once to assess organizing needs in the city.

"We've identified issues that were important to us," Rigby, Jr. said. "From disrupting the development of 'the New Detroit' and the cisheteronormative nature of most organizing here to making sure Black Detroiters understand the policies that threaten our survival in the city."

The Coalition for Black Struggle is an effort to bring together many of these different youth organizations around Detroit, founded by Adrienne Ayers, 23, Dennis Black, 24, and Grover Easterling III, 21. CBS members include representatives of New Era Detroit and Black Bottom Archives, WeCopwatch Detroit, We The People of Detroit, and the New Work Field Street Collective, a housing cooperative of justice-minded youth on the city's East Side.

"CBS is a coalition of organizations and individuals committed to combatting anti-Blackness at every facet and building sustainable Black communities," Easterling said. "We envision communities where we won't have to depend on the government or corporations for water, food, and other necessities."

Ayers commented that much of the current influx of youth organizing came as a response to high-profile police brutality cases over the past few years. All three organizers said there was a strong need to link police brutality together with all anti-Black violence in the city, including food availability, health disparities, pollution, tax foreclosures and water shutoffs.

"The particular forms of structural violence that people face in the city aren't by accident," Black said. "You've got a growing number of Black youth in the city, it's the Blackest city in the country and we're at a critical turning point in history where Detroit can either be the vanguard and critical piece of the movement or we can succumb to the structural violence around us."

Black said some elder organizers act as gatekeepers against the current generation taking leadership in the city, a sentiment echoed by other youth. Despite these tensions, CBS has been bringing together organizers of all ages to craft a long term plan for city organizing since its inception last fall.

Monica Lewis-Patrick is one of these older organizers who has participated in CBS conversations and is a co-founder of the We The People of Detroit.

Lewis-Patrick said she tries to embrace every invitation to hear from young organizers as an opportunity to learn.

"Over the last year-and-a-half, I have seen remarkable brilliance from our young people and a lot of intense sensitivity and intentionality in terms of the issues," Lewis-Patrick said. "[They] have made it a reality that we have to embrace one another's struggles - and that through that embracing we build power."