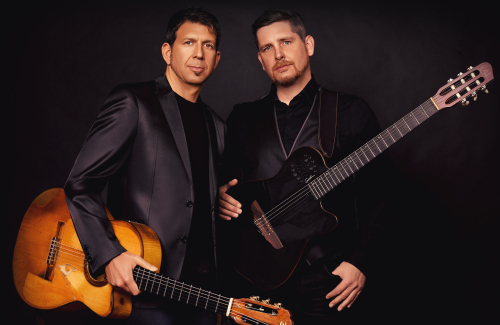 We all know the big name artists who are the faces their respective genres in Detroit; whether its hip hop, techno, rock, jazz, or whatever. The conduit between all the thriving scenes in the city are the actual real deal musicians; the ones that can swiftly move about the various styles of music to put that instrumental touch on your music. A couple guys that have exemplified that in Detroit are Sean Blackman and John Arnold.

Separately, they have been a couple of the most in-demand musicians around the city, playing with a who's who of musicians and audiences alike. Together, known as Blackman & Arnold, they were just as in-demand for many years, and for the first in seven years, the two will reunite for a one-night only concert at the Royal Oak Music Theatre.

The style of Blackman & Arnold is guitar-driven, taking its listeners on a journey of impassioned world jazz music that is emotive and full of heart. The duo, who will performing with nearly a dozen of their fellow musician friends for the big show, are no strangers to any audience around the Metro Detroit area; pretty much having played at every legendary venue where at times they were performing 300+ times in a year together.

In the 15 years since the inception of Blackman & Arnold, the two have epitomized the hard work and DIY aesthetic of working musicians that you might see in any city. Whether it was Fifth Avenue, Agave, or wherever else you regularly saw Blackman & Arnold, come out and relive it once again with the boys, and if you never experienced the fire of their show, this might be your last chance to see it.