How do you lose a six-ton bull elephant?

One minute he had been right in front of us, a posse of rangers and our CBS News crew. The next minute, he had crested a steep hill at a run and was lost in the difficult broken hill country of Northern Kenya.

His name is Mountain Bull, and he had been hunted before. Now he used his canny knowledge to elude us for hours. He would alternate between turning to face us in thick cover -- where a cornered elephant is most dangerous -- and quick-footing it in breaks of open ground, leaving us far behind.

But then as the day gave way to the late afternoon, and just when we were sure that the hunt was lost, a lucky break allowed for a shot. I heard the pop of the gas-powered gun and watched as a pink dart fluted through the air to embed deep into the hide of Mountain Bull's flank.

The shooter was a veterinarian with the Kenya Wildlife Service. Mountain Bull would be down in minutes and the clock on his life would start ticking. The longer an elephant is prone, the greater the risk of death. Big animals can suffocate under the weight of their mass, or can bake in the stultifying heat.

Now with one dart in him, Mountain Bull is still on the run. He has disappeared into a ravine and our vehicles cannot follow. An aircraft is quickly called and it starts to search for the animal from high above.

Then, we get our second break. About 30 minutes into the search, the aircraft spots him lying on a steep hillside and we make our way as fast as we can by vehicle and then later, by foot.

Rangers from the Lewa Conservancy, the local landowner from Borana Ranch and Kenya Wildlife Service were attempting a risky and controversial operation -- one rarely filmed, and one I had never witnessed before. The plan: to saw off about a third of the tusks in an effort to make Mountain Bull less attractive to poachers -- but also to keep him from breaking fences and stay inside protected areas.

It's a delicate procedure -- remove too much and the deep nerve within the tusk will be painfully exposed.

We only had a few minutes to work on the sleeping giant, its head propped up by its huge tusks. The rangers go to work swiftly. The chain saw coughs to life and about 11 kilograms (about 25 pounds) are easily shone off from each tusk. Water is poured over Mountain Bull's forehead to keep him cool. I waste no time and jump in front of the camera, adrenaline surging, to deliver a few lines that I yell out, trying to raise my voice above the roaring chainsaw. I don't remember what I say.

Less than 45 minutes since he was darted, Mountain Bull is given the reversal drug and we scramble for safety, back to the vehicles but with a camera left behind at the site to watch the boulder wobble unsteadily to his feet.

Twenty-two kilograms lighter, Mountain Bull retreats into the bush to hopefully live out his days in peace. The last report that came in said that he was doing fine.

Of course, trimming the tusks would no doubt affect his behavior and perhaps alter his ability to find mates. But it also may make him less of a target to poachers. The six slugs he still carries in his body, from his previous encounters with gunmen, are hopefully the last that he will carry.

I first saw the remnants of a dead elephant decades ago as a kid growing up in West Africa. It had been hauled into town on a logging truck, the meat divided up by the village and its small yellowish tusks, no more longer than my forearm, offered to my father for sale.

Today, the scale and manner of death is entirely different. In my childhood, the problem was driven by poverty and hunger. Now it's an illegal commercial enterprise supported by shadowy cartels and corrupt officials with much of the ivory ending up in the Far East (China, Philippines, etc.). The money is huge. The risks passed along to the gunmen? A cost of doing business.

A recent National Geographic article estimates that 25,000 elephants are killed each year in Africa. One poaching incident in Cameroon left more than 300 elephants dead, slaughtered by well-armed militia on horseback, reputed to be from neighboring Chad. As the New York Times has reported, "blood ivory" is becoming increasingly militarized.

As a local Kenyan ranger told me, "They are robbing our country, stealing from us, and leaving nothing behind." He had been in several gun battles with poachers and one of his men had been shot by an AK-47 recently. The bullet had gone clean through his hand.

Mountain Bull, this one magnificent elephant in Kenya, has been given a second chance, but at an enormous cost both to him and to the people involved in his protection. For tens of thousands of others in Africa the future, as long as demand for ivory persists, is far from certain and we cannot afford to lose many more. 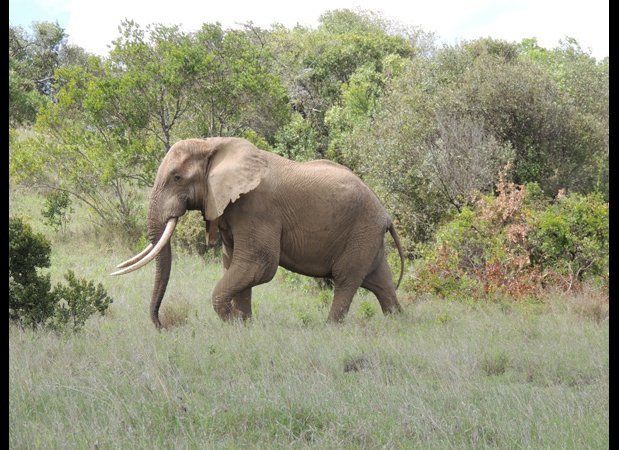