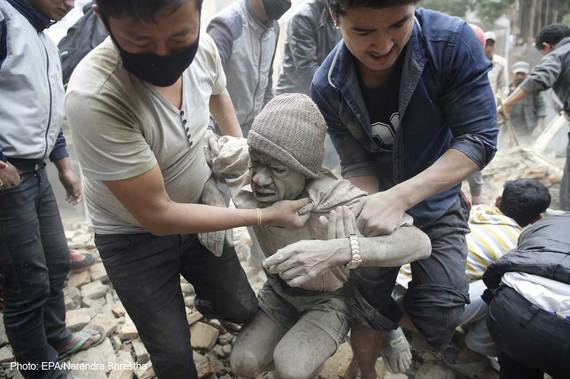 Yesterday a terrible earthquake shook Nepal near the capital, Katmandu. Oxfam teams are on ground in Nepal with more staff and relief supplies flying in. I'd like to share this post which was shared with us in response, by Shaheen Chughtai, Oxfam's Deputy Head of Humanitarian Policy and Campaigns.

Kathmandu was ever a disaster-in-waiting. The densely populated capital of one of the world's poorest countries clings to the slopes of the seismically unstable Himalayas. The city was near-leveled and 8,500 killed in its last great earthquake 81 years before. It had history. On Saturday, the long-feared calamity struck.

I first arrived in Kathmandu in 2007 to begin a new job with Oxfam. I'd been with Oxfam two years earlier and 1000 kilometers west along the Himalayas, part of the international aid effort following the Kashmir earthquake. I saw towns there razed by the shifting tectonic plates that lie beneath that mountain range. More than 75,000 people were killed then, 85,000 injured, and more than three million made homeless.

With the Kashmir tragedy fresh in my mind, I remember looking at the thousands of flimsy shacks and hovels lining Kathmandu's dusty slums and the sturdier, but still precarious, multi-tiered family homes, and the cheaply-built apartment blocks and ornate temples that collectively give the city its colorful distinctive appearance. We all understood and feared what a big earthquake would surely do there.

But Kathmandu was fundamentally flawed by more than just its violent geology. A million-plus people are crammed inside it. Half of Nepal's 28 million population don't have access to improved sanitation and live below the poverty line, around one-in-three of them in severe poverty. All this was true, even before this latest earthquake. Their ability to cope with a major disaster is quite crippled by the lack of the kind of economic and social infrastructure that people in richer nations take for granted. Many thousands of Nepalese are going to need a great deal of help.

Nepal has long been desperate for a huge, sustained investment to strengthen its physical infrastructure in order to keep its people safer, and to develop its economy and services so that local communities and the state had enough assets to fall back on. The challenge now will be to invest the out-pouring of international aid -- which certainly will come -- into a rescue, recovery and eventual reconstruction effort that will do exactly that.

Such an effort in the near-term will be extremely challenging. As I write, many of my Oxfam colleagues in Kathmandu are preparing to bed down with the rest of the city's inhabitants for their second night in the cold, under the stars. Terrifying aftershocks that continue to shake a structurally damaged city mean that it's too risky to sleep with a solid roof over one's head. We are trying to talk to our staff and friends, but the phone and digital services are weak, and in many cases, broken. A few old friends with electricity generators have managed to keep in touch via Facebook, telling of the previous sleepless night amid the aftershocks.

Communications are so vital for workers to coordinate relief and aid, so the ability of medical and engineering staff to work easily is likely to be severely hampered. We have staff on their way from India and around the world -- and tons of relief supplies now readied in our warehouses including in Bicester, UK -- prepared to fly in to provide more capacity to our country team and aid for a traumatized population.

But the airport was closed, roads and bridges damaged and tons of rubble are blocking the streets and alleys of Kathmandu. Water supply pipes, electricity generating sub-stations, bridges, treatment plants -- all these things will be affected, and food, water, fuel and medicines will be immediately in short-supply. From today, people will start skipping meals and to rely on friends and relatives for support. Some will be moving to areas they consider more safe, where they will set up camps. Others will choose to stay close to their belongings and shattered homes, perhaps waiting for missing relatives. They will start selling assets in "distress sales." They will use what food, cash and property they have just to get by. They will start borrowing. Many poor Nepalese will already be in debt.

All these contingencies and actions are described in Oxfam's program plans for exactly this kind of eventuality. Our country team has been preparing for them for years.

Oxfam has invested a lot of time, effort and resources over the years on working with partner groups in Nepal on what we call "disaster risk reduction" programs. All of this work that we have done together will be severely tested over the coming days and weeks and months. I know many of these groups as knowledgeable, networked and committed from having working alongside them. The NRCS Disaster Management Department works on search and rescue, first aid, shelter and water and sanitation; the Centre for Disaster Management works similarly; DPNET works on information and coordination; we have worked with the National Centre for Earthquake Technology. Oxfam has a significant network of dozens of partner organizations that will be swinging behind the government and donors' efforts in support.

But in the first night since the earthquake struck, of course, all these same men and women, and their children too, have been sleeping out in the open. The challenge of mounting a coordinated aid effort led and directed by local officials and organizations will be huge.

Nepal and Kathmandu will benefit from much international goodwill. The interest of governments and citizens from donor countries to help will be substantial, as always most especially on the back of television and social media. The UK and the Commonwealth countries have historical and geopolitical ties to Nepal. The country is a popular tourist destination in the shadow of Mt. Everest and the Himalayan mountains. Its Gurkha soldiery are famous. We would expect China, India, the Gulf States, the U.S. and European countries, and countries in Asia particularly in East Asia, and the Pacific to show a strong outpouring of commitment and cash to aid the stricken capital of Nepal and its people.

In the mean time, however, local people -- medical staff, local officials, local aid workers and affected communities -- will be striving to help each other while trying to make sense of the chaos and destruction."