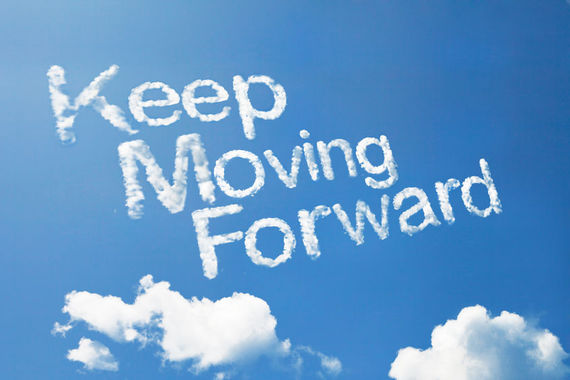 One week after the election, I spoke to a "secret group" (hint: pantsuit is in the name). These professional women were diverse in race, ethnicity, sexual orientation and gender identity, but shared a common state of mind: they all felt like they had been kicked in the stomach. Although not carrying an actual sign, "#NotMyPresident" was written all over their faces. I felt that way too. But as a discussion leader for the group, it was my job to give them - and me - hope and a direction for positive, productive action. The first and most important step? Double down on what you do best.

The election of this notoriously sexist, xenophobic man gives one pause, and worry, about what his leadership will do to the culture of this country and how that will trickle down to the individual workplace. Will women who "aren't that attractive, maybe a 'five' " be less likely to advance to leadership roles? If they aren't deferential, will they be seen as a threat? Will their performance be undervalued and evaluated less favorably than a man's? A poll of 750 professional women by InHerSight found that 76% feel worse about their career prospects after the election, citing Trump's sexist comments and treatment of women as potentially leading the way for an overall corporate culture shift.

Perhaps the most detrimental potential effect of a Trump presidency on corporate America, and particularly on professional women, is the example he has set as an old-fashioned "command and control" leader. While Trump's most egregious behavior and remarks would get him booted from most organizations, his style of aggressively "taking the bull by the horns" to make his underlings and competitors fall in line behind him is often applauded, especially when that method gets "strong" results. Is Trump making it acceptable, or even desirable, for leaders to have a "take no prisoners" "hardball" style? And, if they don't, are they being too "soft" and not leaderly? If so, women who are leaders or emerging leaders are put more squarely in a double bind.

Women who wield power in the Trump way are seen as abrasive, pushy, and bossy, earning them the label "bitch." And leading that way isn't so good for companies either. While it may yield some positive results in the short term, it's a leadership style that ultimately stymies innovation, effective teamwork and engagement.

The leadership that companies need in order to continue moving forward in the 21st century, rather than backward, is a collaborative, inclusive one; one that wields the "soft power" of influence. Successful women know this, and these qualities often come naturally to them.

Women, more often than men, have a broad focus and a long-term view. This will serve them well as they navigate the impact of a Trump presidency, keep their organizations headed in the right direction and maintain a culture where women leaders can thrive.

So in the face of the bluster, the sexism and the autocratic power displays, I call upon professional women to remind themselves of what works for them, and works best for their organizations, and take these four steps:

1. Share power - Rather than holding on to control and relying on yourself to come up with the best answers, invite emerging leaders to participate in problem-solving and decision-making. Facilitate conversations to ensure that everyone is encouraged to speak and is heard. Designate different people in the group to take turns facilitating. Give credit where it is due, and publicly tell the story of the group's process, progress and the result.

2. Promote self-awareness - Help people learn about how they are viewed and work with them to proactively manage others' perceptions of them. Talk to them about what they want people to know them for and discuss what they can do to reinforce that.

3. Facilitate connections - Focus on the interpersonal ties between and among team members. Regularly bring together your group to discuss work- progress, goals and how you can help one another achieve your objectives. This helps everyone feel a sense of ownership over what they're trying to achieve together, reinforcing collaboration.

4. Sponsor and support other women - Typically, a sponsor is an advocate at a very senior level of the organization. But whether or not you are at the c-suite level, you can have a positive impact on women's visibility and credibility. Ensure that women's voices are heard and not ignored. Amplify points that women make in meetings by repeating them and adding to them. Don't allow others to interrupt. Talk about women's achievements that have had a positive impact on the organization and put them into the context of strategic results.

Finally, I urge professional women to stay true to themselves and trust their instincts. Double down on what you do best, and keep moving forward!

Carol Vallone Mitchell, Ph. D. is the author of the book "Breaking Through "Bitch" - How Women Can Shatter Stereotypes and Lead Fearlessly" and cofounder of Talent Strategy Partners.