International long-term private finance to developing countries has changed dramatically in the wake of the global financial crisis. Caught in "post-crisis blues," as my World Bank colleagues Jeff Chelsky, Claire Morel and Mabruk Kabir called it in a recent Economic Premise, some traditional sources of long-term finance are strained, and alternatives have not been able to adequately compensate. Private financing of infrastructure has been particularly hurt.

International long-term debt flows to developing countries -- bonds and syndicated bank lending with maturities at or beyond five years -- fared well from 2000 to 2012, increasing fourfold in nominal terms (see Chart). However, global bank lending has retrenched from that trend since 2008, reflecting doldrums faced by European banks. These banks had long been key players in the syndicated loan market for developing countries, and other banks have not filled the gap, especially in specialized niches, such as infrastructure finance. 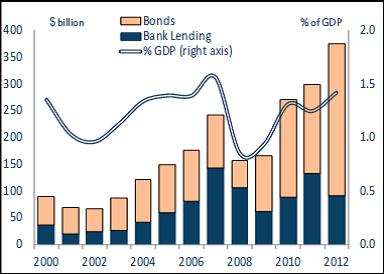 Bond issues have surged after the crisis (see chart), reflecting a combination of unconventional monetary policies in large advanced economies, as well as hype about growth prospects in developing countries. However, not only are bond flows experiencing the effects of the current unwinding of those two factors, but they have also shown to be imperfect substitutes to bank lending. As Chelsky et al point out, bond issuance has been regionally concentrated in Latin America and emerging Europe, and it has also been primarily used to refinance existing debt at lower costs, or simply to replace syndicated lending that was not being rolled over.

Some combination of bond issuance and bank lending is what usually works best in debt finance of greenfield investments in new projects and creation of new productive assets. Banks are better equipped to address issues of information asymmetries, particularly at early stages of project design and in the case of complex financing needs -- like infrastructure -- whereas arms-length relationships through bond issues can extend the investment financing. As I have argued elsewhere -- currency war and peace -- the mere abundance of international liquidity of latter years has not been conducive to an equivalent creation of new productive assets in developing countries. As the retrenchment of cross-border bank long-term lending does not seem to be reversible in the near future, other vehicles will need to assume a bigger role:

(...) institutional investors with long-term liabilities -- such as pension funds, insurers, and sovereign wealth funds -- may be called upon to assume a greater role in funding long-term assets. (...) local-currency bond markets -- and, more generally, domestic capital markets -- in emerging economies must be explored further, in order to lengthen the tenure of financial flows.

What Development Banks Bring to the Table

In such a context, it is no surprise that the creation/expansion of national and multilateral development banks has been getting so much attention. In principle, even with a domestic base of banks and other financial intermediation vehicles willing and able to fill the gap left by shrinking international syndicated lending, there would be a uniquely additional role to be played by such development banks. The key word here is "additionality."

Chelsky et al approach some of the ways by which, in the cases of projects with a clear development impact, multilateral development banks can provide such "additionality." To a large extent, I believe, the same principles hold for the whole range of official development banks.

First, there is a core financial additionality offered by development banks, when they play a key role as a catalyst, drawing private capital into long-term projects in countries and sectors where significant development results can be expected, but the market perceives high risks. Those institutions contribute their own funding (loans, equity) and/or guarantees, providing partners with a level of creditor status better than otherwise. Additional financing is also generated by bringing partners into specific deals through syndications.

It is relevant to stress that "more becomes less" after a certain point. The size and composition of development bank portfolios must aim to maximize the "crowd in" of private engagement, rather than taking their place ("crowding out"). This is particularly the case when the supply of development bank finance embeds substantial public subsidies. Furthermore, those portfolios should be moving frontiers: When success is obtained, perceived risks tend to fall, finance starts to acquire "plain vanilla" attributes. In these cases, the originator development bank must move on...

Long-term project finance needs in developing countries tend unequivocally upwards. In infrastructure, for instance, just to keep pace with the demands of urbanization, growth, climate change, and global integration, the World Bank estimates that these countries need to invest an additional US$1 trillion per annum through 2020. The retrenchment and inappropriate composition of existing international debt flows further highlights the important role of development banks. Nevertheless, as exemplified in the imperfect substitutability -- and rather complementarity -- among types of private finance, development banks should make sure they maximize the development bang for their little -- and often costly -- buck by ensuring additionality in what they do.