Scientists in Poland may have come up with a powerful new deterrent to drunk driving. It's a laser-based device that can detect alcohol vapor--like that exhaled by someone who's been drinking--inside a car as it passes by.

The device works by detecting subtle changes in the laser beam as it passes through the alcohol vapor.

"We all are already familiar with laser instruments used by the police for speed-limit enforcement," Dr. Marco Gianinetto, a Polytechnic University of Milan researcher who has no connection to the Polish research, said in a written statement. "In the future, a similar technology may be developed to detect different chemical compounds, enabling the detection of drivers under the influence of other intoxicants."

The researchers, from the Military University of Technology in Warsaw, successfully tested the device by aiming its laser at a car passing by at a distance of up to 20 meters. The car's interior had been filled with alcohol vapor, simulating the exhalations of a drinker inside the car. 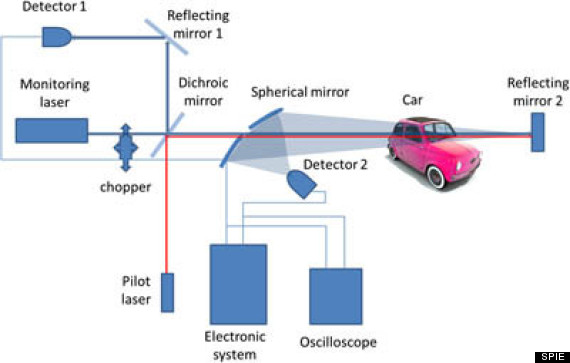 An illustration of how two lasers involved in the study reflected off of mirrors to reveal the presence of alcohol vapors in a test car.

The device is in a very early stage of development. But the researchers envision that police could use it in much the same way that they use speed guns to catch speeders. The device could alert police to drunk drivers or could be equipped with a camera that sends out a photo of a drunk driver's car.

Of course, the device has some limitations. It could alert police to cars in which someone who is drunk is only a passenger and not the driver.

Also, "from the practical point of view, there seem to be some countermeasures, such as driving with windows open, solar screens on the side windows, etc., that can be applied by drivers to deceive the system," the researchers wrote in their study's conclusion. "However, such situations are very easily detected by the system, which sends this information to the policeman indicating that the car should be checked."

A paper describing the device was published online in the Journal of Applied Remote Sensing on May 19, 2014.

Futuristic Cars That You Can Try Today