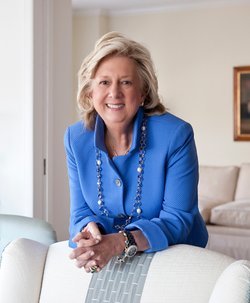 For more than 20 years, Linda Fairstein was a prosecutor and Chief of the Sex Crimes Unit of the Manhattan District Attorney's office. She's considered America's foremost legal expert on sexual assault and domestic violence.

When she turned her talents and impressive background to writing novels, Linda created Prosecutor Alex Cooper, and her team of attorneys and police officers, including Detective Mike Cooper. Their exploits in 16 previous novels have made Linda's books international bestsellers, translated into more than a dozen languages.

Devil's Bridge, the 17th in the Alex Cooper series, finds Alex facing a grueling day in court, prosecuting a rapist who is also involved in human trafficking. Amidst threats coming from various quarters, in a terrifying twist, Alex suddenly disappears. Mike Chapman takes the lead to find her, in a frantic race against time, compounded by the human capacity for evil.

As in all your other novels, Devils Bridge seamlessly includes fascinating details about a New York City landmark. In this book, the George Washington Bridge is a key location. Tell us a bit about that structure.

It opened in 1931, spanning the Hudson River at the narrowest point of that part of the river. George Washington used that projection, Jeffrey's Hook, to try blocking the British from going up the Hudson.

I grew up in Mount Vernon, New York, and the George Washington Bridge was my gateway to the rest of the world. In the 1950s, the lower level was built and was called 'Martha.' It was fascinating to watch the construction. It's one of the most majestic bridges ever built. More vehicular traffic crosses that bridge than any other in the world.

Will it be a spoiler if I ask you about the change in the relationship between Alex and Mike?
I don't think so. There have been sixteen books of emotional foreplay between them. Terminal City ended with them declaring they were going to a new place together. I must say that over the years, I've had more fan-reader questions about their relationship than about anything else. 'When are you going to get them together?' is invariably one of the first questions I'm asked at signings. The readers have waited a long time to see this, although only three years have passed in the characters' lives. So, Alex and Mike are trying to work out the tension in their relationship; and just as that happens, she disappears.

In a unique turn of events for an Alex Cooper novel, page 71 of Devil's Bridge begins with a first-person narration through Mike Chapman's point of view. From then on, Devil's Bridge has a completely different voice. Tell us about that.
I've wanted to do this for so long. Alex and Mike have been professional partners who became friends in the very first book of the series. I never plotted a romance for them. Of course, I never dreamed I'd have a series go on this long. Then, readers began demanding that something happen between them. At nearly every signing over the last ten years, people have asked, 'Do you want to write anything else?' I've long felt I'd like to write a book from Mike's point of view. I want to see how he works a case; explore what he loves about Alex; and what keeps him at a distance from her.

Last year, when Terminal City made its debut at Barnes & Noble, my editor Ben Sevier was there and invited me to go to lunch the next day. Over lunch he asked, 'Why don't you give it a try? You keep saying you want to do it. Can you?' I told him, 'I've lived in Mike's head for sixteen books. I know him as well as I know Alex. I'd love to try it.' Once Ben gave me the green-light, it became our secret. I didn't tell my agent. I just set out to write it.

I think telling the story through Mike's perspective makes it a more muscular one. I channeled him instead of Alex, who is so like me professionally, yet personally, is very different. I thought it would be good to get out of her head and see Alex through Mike's eyes. I think Mike will bring more men to my series; women seem to really like him and ask about him.

It was very different and great fun to write from his prospective.

So, in effect, Devils' Bridge became for you a literary and romantic excursion.
Yes, it did. (Laughter). I was staying in the series, but writing a different kind of book. That was a literary excursion for me. And for the reader, we get into Mike's head; see what he's thinking; and understand how and why the relationship with Alex changed. You know, when I wrote the first book in the series, my editor told me, 'Mike is the only person who calls Alex, 'Coop' in the book.' I didn't realize it until it was pointed out to me.

Well, Mike was probably attracted to Alex and had to keep his distance by calling her 'Coop.'
(Laughter). See, my unconscious mind was working overtime, even back then.

The courtroom tension in Devil's Bridge is palpable, as it is in many Alex Cooper novels. What about the courtroom makes it such a great setting for drama?
Alex deals with the darkest and most depraved acts of human nature. The uncertainty of a trial's outcome makes it dramatic. You can prep witnesses for hours, but if you neglect to ask one question, the entire narrative can be thrown off. My own mistakes as a young prosecutor taught me if you leave the door open even an inch, a witness can kick it wide open. Anything can happen. A great adversary can cross-examine your witness, and undo the entire narrative of a case.

You mentioned an adversary. Of course, our system is an adversarial one which seems ready-made for conflict.
Absolutely. Conflict is the heart and soul of drama, which is why the courtroom is such a good venue for stories.

After 17 novels in the Alexandra Cooper series, you probably have many thoughts about the advantages and difficulties of writing a long-running series. Will you talk about them?
You want to keep a series fresh and interesting, so readers will anticipate the next book. You must create interesting characters, because readers become attached to those they like. The series must evolve in other ways, beyond characterization. The protagonist--in this case, Alex--must learn something from her work. This particular novel will probably shake readers up a bit because you get to see things from Mike's perspective--from another angle. It's a fresh twist that allows readers to see the characters in a whole new light. That's part of how I moved the series onto new terrain.

What's the most important lesson you've learned about writing?
I've learned writing requires intense discipline. My job as a prosecutor was overwhelming, since people's lives were at stake. It kept me up at night. I thought, in a somewhat cavalier way, that anything would require less discipline than the law. Writing requires an entirely different kind of discipline. The writing life means you go into a room; close the door; friends and family stay out; and you create a new world. You must stay at it for long hours. It's solitary work, and I can't imagine doing it if you don't love being in words and telling stories.

You write a book a year. How do you handle the nearly universal tendency of writers to procrastinate?
I'm a world class procrastinator. I can find things to do that boggle the mind. The hardest point in the process of writing a book is the beginning--the first hundred pages. There are so many diversions. I become more attached to the work about a quarter of the way in. Then I really get into it and it's a race to the finish for the last three-quarters.

While writing Devil's Bridge, I had a particularly delightful problem with procrastination.

I was widowed in 2011, and last September, eloped with a man I met on my first day of law school. In a weird parallel, turning a friendship like Alex's and Mike's into a romance was scary, because if it didn't work, they would each lose their best friend. Devil's Bridge is dedicated to my best friend, who is now my husband.

If you weren't a writer, what would you be doing?
I'm still a lawyer, so I do pro bono work on projects that interest me. I've helped the NBA with some domestic violence issues and I could always continue working for victims of violence.

I've also started a second series. As a kid, I loved Nancy Drew mysteries. In a way, they introduced me to both my careers. I've always wanted to write a series inspired by those novels. So, before I begin my next Alex Cooper book, I've started a novel geared for middle-school kids. My character's name is Devlin Quick. She's a New York kid with lots of attitude, whose mother is the first female NYC Police Commissioner.

I'm hoping the Devlin Quick books will become an updated version of the series that both entertained and influenced me years ago.

What advice would you give writers just starting out?
You have to love writing. And then, you must read to see how stories are told. It doesn't matter what genre you choose to write, you should read both literary and genre fiction. I go back and read Trollope, Dickens, George Eliot; and then I read my competition: Connelly, Coben, Scottoline, and others. I read them all, just to be in words and to immerse myself in great storytelling. It lifts me up to the challenge of telling stories.
And of course, you must write every day, whether it's two paragraphs, or a journal, or a log of books you've read. Just write.