"Sometimes I'll have dinner with the collector and well talk about the work," Devin Troy Strother says in a phone interview with The Huffington Post. "If there is 'nigga please' or 'bitch' in the title they get a little hesitant to say the titles out loud."

Picturing the straight-laced, uppity tiers of the art crowd asking for the price on "Yassmine Guuuurl Stop Staring at Yourself All Day, You Such A Vain Bitch" is a beautiful image, but there's more to the artist than his titles. 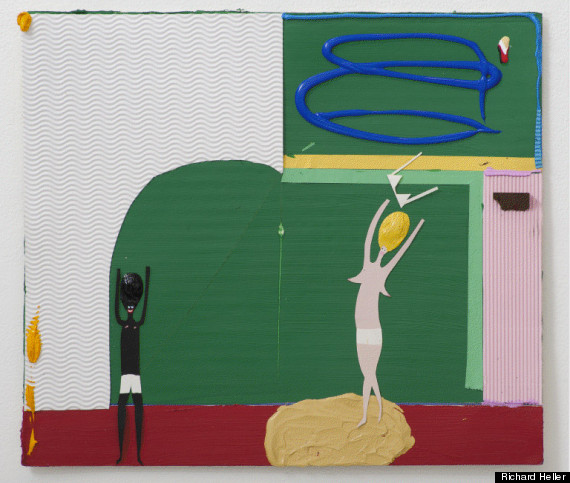 Devin Troy Strother, "The Life times and adventures of a Nigga called Tyrone in, Heather's First Time with a Black Guy," 2012

Strother's neon-tinged multimedia collages look as if a piñata burst open and a miniature world spilled out. Black paper dolls, often undressed and smiling with big red mouths, partake in activities from gossiping to remixing art history's greatest hits. The cluttered planes are pumped full of references, gesturing to minstrel blackface, the work of Felix Gonzalez-Torres and Strother's own relationship history, all present in a flood of geometric shapes and squiggles. More like a party than a history lesson, Strother offers a playful entry into the more heady topics of art history and race.

The forceful oomph palpable in the images are hyperbolized in Strother's titles, which land rhythmically somewhere between a poem and a joke. A sample title reads: "'My Mommas House is so Contemporary, so Abstract that Shit Look like a Morandi tho.' said Keniecia to Shaniecia. 'This is my Mommas House When it was Black.'"

"I have a notebook that I keep with me at all times," Strother said of his process, "and I just kind of try to record different parts of conversations that I overhear sometimes that could kind of lead to an interesting image. Not trying to pay attention to the whole context of a conversation, but just a moment that captures a certain moment of culture." 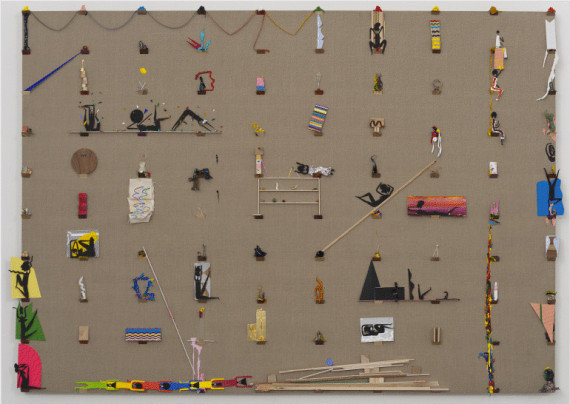 Devin Troy Strother "Contemporary African Compositional Arrangements / Guuuuuurrrrrlllll, Hallelujah Hallelujah, “I told you it was all about space relations and limitations” said Shay Shay to Sha’naynay," 2012

The art world's fascination with Strother's titles, however, reveals a disturbing fetishization of urban slang. "I feel like people are paying for my titles just as much as they are paying for my work," Strother told The Superslice. "It’s fucked up, it’s broken Ebonic English, it’s ghetto, packed and framed in a pristine manner, and that’s how people like it."

The role of the gifted art world outsider, whose blackness is humorously juxtaposed against art world snobbery, is reminiscent of YouTube art darling Jayson Musson, whose character Hennessy Youngman delivers art theory with hip-hop swagger. For Musson there is a clear delineation between his gallery-showing self and his YouTube alter ego; for Strother, the same doesn't apply.

Because of the lingo strung throughout Strother's work, he is often asked about hip-hop's sway in his formative years. Yet the artist, who grew up attending private school in the suburbs of LA, said punk music was a far greater influence in forming his outsider art or DIY approach. "Growing up listening to one kind of music and being expected to know about this other type of music -- it's definitely affected the way I think. Like, I didn't listen to rap music until I was 19. It was weird that people would expect me to know certain things because I was black."

Strother seems simultaneously frustrated and amused by the complicated associations of being a black artist while not explicitly wanting to make artwork that is, as he calls it, specifically black. "I just try to make a painting and the people happen to be black. It's not like heavy black, like Glenn Ligon or Kara Walker that deal with civil rights or black injustice. I'm not trying to talk about those topics in my work and I don't have any interest in that. I am trying to talk about my experience as someone who was considered black."

Through fearlessly plumbing the murky depths between the serious and the silly, Strother challenges what is assumed and interpreted when a black artist portrays black people: 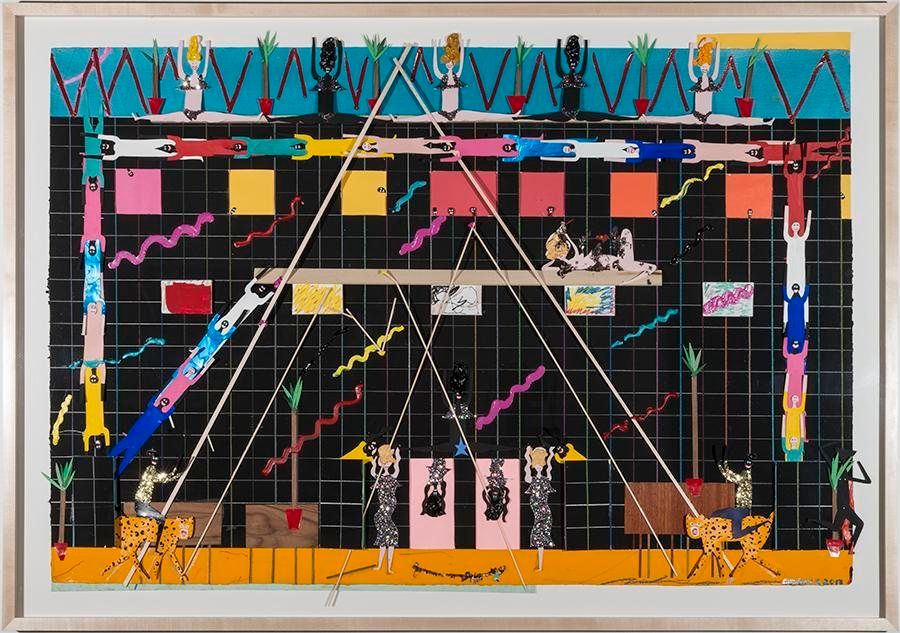 1 / 12
Devin Troy Strother "My Mommas House is so Contemporary, so Abstract that Shit Look like a Morandi tho." said Keniecia to Shaniecia. "This is my Mommas House When it was Black." 2013 mixed media on paper 32 x 48 inches