Just beyond the security desk at the Tribune Tower is a hallway of historic newspapers with famous headlines reading "NIXON RESIGNS," "MOON WALK COMPLETED," and "EUROPE'S WAR IS ON!"

What's missing is Chicago Tribune's most famous newspaper and headline ever printed -- the November 3, 1948 "DEWEY DEFEATS TRUMAN" edition of the then titled Chicago Daily Tribune. This is the rarely told story of that legendary error newspaper.

On election night, November 2, 1948, Truman snuck away from reporters covering him in Kansas City and made his way to nearby Excelsior Springs, Missouri, a small resort town. He got a hotel room, took a bath, and went to sleep. Throughout the night, radio reports confidently predicted that, despite a Truman lead, the late returns would propel Dewey to victory.

Throughout the night, returns were coming in slow, which made the news difficult to report. Adding to the challenge, the regular Chicago Daily Tribune printers and typesetters were on strike leaving inexperienced employees at the helm. With time running out before the printing deadline, the inexperienced and certainly exhausted Tribune staff ran the "DEWEY DEFEATS TRUMAN" headline.

While the screaming headline was the most famous error of this issue, it wasn't the only mistake. Calling further attention to the strike and a lack of typesetting experience, the replacement staff used a typewriter for news on the front page and portions of a few others. For the sake of time, typos were corrected by "X"ing over them with the typewriter. And, perhaps most embarrassingly, five lines of election coverage in the far-right column were typed upside down!

Shortly after delivery of the early edition proclaiming Dewey as the new president, it became apparent to the Tribune staff that Truman would win. Great alarm and panic surely set in at the Tribune Tower. Staff was immediately sent out with any vehicle available to gather the error papers from news stands and homes.

Around 4 a.m., Truman awoke in his hotel room and heard on the radio the good news of his certain victory. He quickly rode back to Kansas City.

While the stressed Tribune staff scrambled to collect newspapers that morning, Truman began a calm and victorious train ride from Kansas City to Washington, DC. During a brief stop at the St. Louis Union Station, Truman was given a copy of the Tribune as he stood on the rear platform of the train. Reporters asked Truman to pose with the paper and comment. Truman proudly displayed the issue and responded that "this is for the books." Sure enough, the image of Truman holding the error "DEWEY DEFEATS TRUMAN" edition of the November 3, 148 Chicago Daily Tribune is now featured in practically every high school history book.

Thousands of the error papers were retrieved that morning but many remained in the hands of customers. Today, only a few hundred copies have survived (often the front cover only) but most are shredded or heavily worn. The original issue pictured below has only been in the hands of two people and includes a great story. According to the second owner, the first owner and her brother operated a newspaper distribution company during the 1940s and 50s, and a bundle of these error papers had been dropped off during the normal late night/early morning train delivery. Upon learning that the election was turning in favor of Truman, the Tribune Company instructed the distributors to stop delivery of this early edition. Realizing the historic nature of this headline, the brother and sister placed one of the bundles in a cedar chest where it stayed, unexposed to light or heat for 44 years. The issue has remained unexposed to light since then so this is one of the extremely rare, pristine copies in existence. 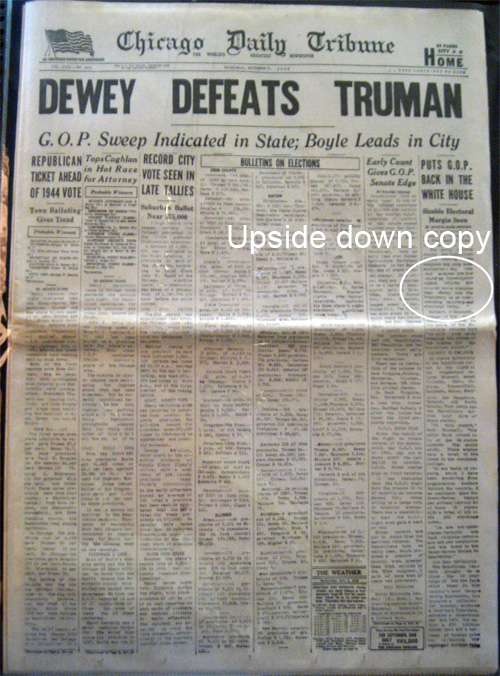